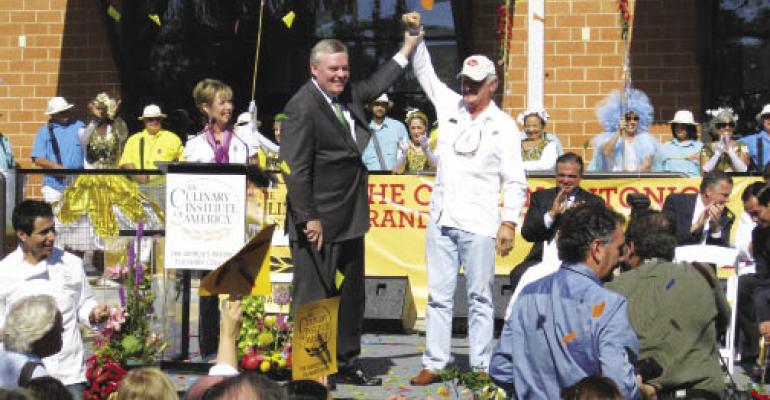 The Culinary Institute of America’s staff and trustees gathered in San Antonio Oct. 9 to unveil the institution’s expanded third campus, which was created to highlight Latin cuisine and foster diversity in foodservice.

The CIA, based in Hyde Park, N.Y., and with a satellite campus at Greystone in St. Helena, Calif., has expanded its Pearl Brewery facilities in San Antonio from 5,000 square feet to 30,000 square feet and is offering an array of culinary programs with an emphasis on Latin American cuisines.

In remarks, Cameron Mitchell, chairman of the CIA’s board of trustees, called it an “historic day,” adding that the new campus continues “the CIA’s longstanding legacy of leadership in the culinary world.”

The new campus and scholarship endowment is funded with a $35 million gift from the foundation of San Antonio businessman Kit Goldsbury, whose Silver Ventures Inc. is developing the multi-use former Pearl Brewery site that serves as home to the expanded campus. Goldsbury is the former owner of the Pace picante sauce company.

Tim Ryan, president of the CIA, said the “San Antonio native and philanthropist with a lifelong passion for Latin American food wanted to give back to his home town and the industry he loved so much.”

Goldsbury’s gift led the CIA to create the campus in 2007, and the campus now offers a 30-week culinary-arts certification program. Ryan said the dream was two-pronged: “Part one was to provide an education to young people, especially young Latinos, so that they could become future leaders in the foodservice industry,” he said during ribbon-cutting ceremonies. “Part two was to promote the true quality, depth and breadth of Latino cuisines in the United States.”

The new campus includes two stories of new buildings on the Pearl Brewery grounds. The first floor offers three teaching kitchens, two skills kitchens and a Latin kitchen that has a wood-fired oven. The second floor features offices, classrooms, a professional bakeshop that is sponsored by Dunkin’ Donuts, as well as a demonstration theater and conference space that can accommodate 350.

The site also includes an extensive outdoor kitchen featuring a wood-fired clay comal, a parilla grill and an in-ground barbecue pit, which will help in teaching indigenous cooking techniques of Mexico and the rest of Latin America.

“There is a reality we want to change” Ryan said. “That reality is that, depending on where in the country you live, somewhere between 25 to 75 percent of the kitchen and restaurant workers in foodservice are of Latino origin. However, just a small fraction of that talented population, at present, rises through the ranks to leadership or ownership positions, mostly because they lack the required formal education.”

The campus also houses the Center for Foods of the Americas, a division of the CIA that staffs two researchers doing original documentation of cooking methods in Latin America.

“So today, we are all here to support an important mission: to elevate Latin American cuisines to their rightful places among the great cuisines of the world,” Ryan said, adding that the partnership with Goldsbury and his Silver Ventures had led to “a significant scholarship program to help these young people have an access to formal education.”

About $23 million of Goldsbury’s gift has been set aside for the “El Sueno” — Spanish for “The Dream” — scholarship program.

Many see San Antonio as a “gateway to Latin America,” said Julian Castro, mayor of San Antonio, who thanked the CIA and its board for expanding the campus and “cultivating a wonderful relationship with our city.”