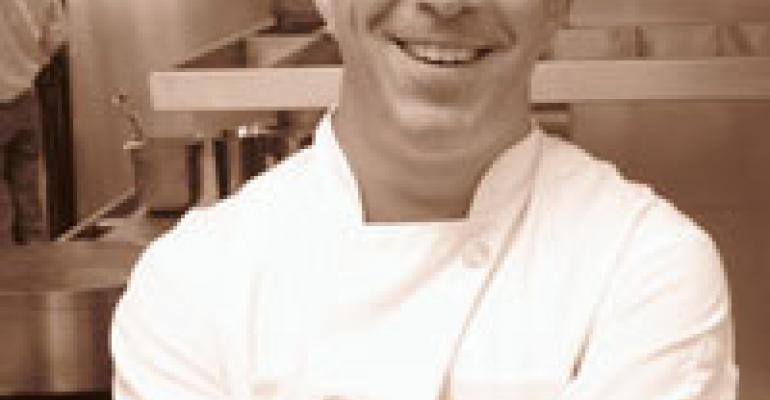 Called Untitled, the 65-seat restaurant is slated to open March 21 at the Whitney Museum of American Art in New York. The concept is intended to emulate a Manhattan café typical of the Upper East Side neighborhood where it will be located. It will specialize in breakfast, which will be served all day long.

Dinner will change weekly and will be served only on Saturdays and Sundays.

Running the Untitled kitchen will be Chris Bradley, former executive chef of Ardeo/Bardeo in Washington, D.C., and, most recently executive sous chef of another Danny Meyer property, Gramercy Tavern.

How do you plan to update the classic Manhattan café?

We figured that, with our expertise, we can source it and execute it better. We’ll be making regular omelets with three eggs and a little milk, but with better eggs. We’ll also be making our own hams and pastramis — that sort of thing.

We haven’t worked out the final details yet. It might be a set menu, or there might be some choices to give it a little more popular appeal. We might run a theme for a few weeks, like “meet your maker,” where we bring in producers, or we might do different around-the-world kinds of things. We’re still figuring it out. And it’s exciting for me because it will be a new challenge every week.

Before we were able to discuss the details of the restaurant, I told people to “Imagine [Gramercy] Tavern lite.” You’ll see the same producers, not necessarily the same style, but food that’s well sourced and simply prepared but with top-notch execution.

This is your second executive chef job. Tell us about Ardeo/Bardeo.

Ardeo was very much a New American place, with lighter food. Popular dishes were black cod with soybean succotash and lemon thyme, and halibut with cauliflower and kale.

Bardeo was the tapas bar next door, with a heavy emphasis on cheese with a program that I started.

What kind of cheese program?

They had been buying decent bulk cheese from large purveyors, and I started sourcing it a little better. I attended culinary school in Vermont in 1999 and 2000, and I knew there was a burgeoning artisanal cheese movement there. I actually tried to get a paid internship at one of the cheese makers, but their profit margins were too low, and they weren’t looking to pay any interns.
But I started using cheese from smaller purveyors at Bardeo.

I also took over the cheese program at Gramercy when I got there, and the cheese in my omelets at Untitled are going to be from some of the same suppliers.”

How is that going to affect your food cost?

The flavor in good cheese is so much more powerful that you can use a smaller amount. And since we’re going to be making our own meats, that really helps with the food cost.

So I guess if you use better products it can also be lower in calories.

Yeah, and we’re going to have egg white dishes and low fat yogurts with granola. We’re also working with other smaller regional producers, and I hope we will be the type of restaurant that helps make their business sustainable by being a source of guaranteed money — not trying to make them so popular that they’ll be in Whole Foods and can’t keep up with production — but so that they can grow in an intelligent way.

We’re also talking to a soda company that we hope will be making three keg sodas for us.

Can you talk about that?

We’re 90 percent there. We’re going with Coke and Diet Coke for their iconic value, but for drinks like root beer and ginger beer we’re going to source from a local company.