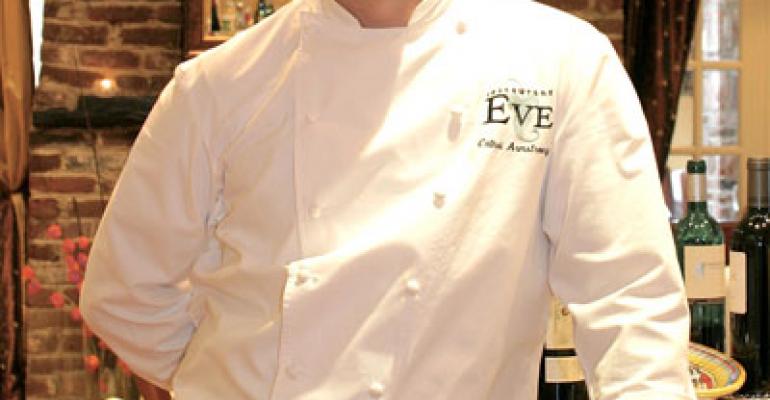 Authentic cuisine, or food with a sense of place or identity, is one of the hottest trends today, and Cathal Armstrong took it to a new level Tuesday, when he prepared a Celtic dinner for the Archaeological Institute of America’s annual gala.

The chef-owner of Restaurant Eve in Alexandria, Va., teamed up for the dinner with Jason Munger, executive chef of Capitale, the event space in New York City where the event was held. They took the findings of food archaeologist Ben Thomas, including ancient recipes of the Celts — an ethnic group that includes the Irish, Scottish and Welsh as well as the people of Cornwall in England, Brittany in France and Galicia in Spain — to create a modern dinner out of food available to the ancestors of Armstrong, who is a native of Dublin. For example, potatoes, which weren’t introduced to Ireland until the 16th century, were not on the menu.

Armstrong spoke to Nation’s Restaurant News about the dinner in advance of the event.

Tell me about the AIA dinner.

In fact, the ancient Irish had a very diverse diet. There was plenty of honey — there were extensive laws about the ownership of bees and honey — so there was mead. There was also wine and olive oil.

How did the ancient Irish get olive oil?

It’s believed that the Celts probably originated in Northern Italy, and they brought some of what we associate with luxury foods — olive oil and wine and cheese — with them.

There were also tons of wildflowers and leaves. Wild garlic was very plentiful, and dandelions and nettles. Dublin Bay has lots of shellfish, such as prawns, cockles and mussels. They braised and stewed a lot of meats, and spit-roasted big game.

So it was a really, really diverse palate, particularly among the wealthier landowners. Less fortunate people had porridge, basically. The middle class had wheat and the lower class had barley.

So we worked on the menu to fit in those kinds of ideas, to cover the [economic] spectrum from top to bottom.

Where does all this information come from?

A lot of it is from archaeological remnants of the ancient capital of the high king at Tara in County Meath. And in the ancient epics and legends there’s some discussion of what was eaten.

How did you research this dinner?

Unlike the ancient Irish, we have the Internet, and my dad was helpful in providing an article about what the ancient Irish ate. I also visit all the historic sites, and growing up, when the rest of the world was reading the Iliad and the Odyssey, we were reading about Fionn MacCumhail and Cú Chullainn.

What will you be serving?

The first course is smoked mackerel. I wanted to bring in the wildflowers and garlic, so we built a salad around that with fennel and garlic and dandelion greens.

For the main course we went with lamb, because they were probably milking sheep before the 3rd century.

I wanted to focus on the fact that they were definitely eating a lot of stewed meat at that time. So I’m making braised shoulder, heavy with root vegetables, garnished with olive oil and moist barley cakes.

For dessert we’re doing crème brûlée, which they definitely were not eating at that time, but they probably had honey-seasoned milk and cheese-type desserts, and we’re working within the constraints of the 21st century. We’re doing three flavors of crème brûlée: apple, mead-honey and wild berry.