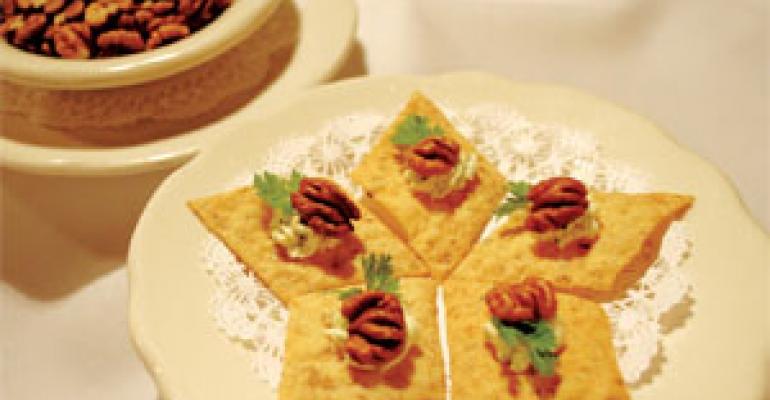 As a child growing up in Paris, Ill., Andrew Patrick gathered hickory nuts with his mother, who cracked them with an old piece of railroad iron. The hickory nut’s shell is so hard that it defies ordinary nutcrackers, and tales of whacking the nut with hammers and meat mallets are not uncommon.

Today, as chef of Andrew’s at the Westbrook Farm in Paris, Ill., Patrick prepares hickory nut-crusted lamb—seared rack of lamb coated with a stone-ground mustard mix and hickory nuts, roasted in the oven, sliced and served au jus. His mother, now in her 80s, still gathers nuts for him, and Patrick supplements her work with hickories gathered by other retirees.

For Patrick, hickory nuts are the key to the dish. “Lamb to me is a little bit earthy, compared to beef,” Patrick says, describing nuts as an excellent match for the protein. “Hickory nuts have a real earthy, nutty flavor that you don’t get with walnuts, you don’t get with pecans or any other nuts. If you put them side by side, I can tell. The hickory nuts stand out.”

Hickory wood has often been used for furniture as well as things like ax handles and baseball bats, and hickory-smoked hams and bacon are familiar. Hickory nuts appear far less frequently on restaurant menus than walnuts or pecans, but chefs who use them prize them highly—and often closely guard their sources. Patrick’s personal, small-scale suppliers are fairly typical.

Gathered in fall, the nuts are available mostly at farmers markets or from families who earn extra money by gathering and shelling the nuts as a hobby business. Cleanly picking out the nut meats is a challenge. Preparing hickory nuts is labor-intensive, so it’s no surprise they don’t come cheap.

Jack McDavid, chef-owner of Jack’s Firehouse in Philadelphia, gathers the nuts from his own trees and relies on local youngsters to shell them. He likes to use the hickories in a torte or in his house-made chocolate fudge, adapted from his mother’s recipe.

He remembers his hands aching in the cold as he cracked hickory nuts and black walnuts with a hammer as a child growing up in the mountains of Virginia.

“Hickory nuts just have a sweet subtleness about them that I don’t know of any other nut that does,” he says.

“Because hickory nuts are so precious, we like to feature them prominently,” says chef Lucia Watson of Lucia’s Restaurant and Wine Bar in Minneapolis. She uses toasted hickory nuts as the finishing touch to a dish of ravioli filled with winter squash, for example, or in a hickory nut cookie, where their presence will be unmistakable.

The hickory nut has “kind of an earthy, woodsy flavor,” Watson says. “It’s a flavor that really has a lot of depth in your palate.” She adds that pecans are usually the closest nut comparison, but that hickory nuts are smaller and have a “wilder,” more intense flavor.

“It’s a gathered food, not a cultivated food,” says Ouita Michel, chef-owner of Holly Hill Inn in Midway, Ky., who uses hickory nuts instead of walnuts in a cake inspired by an Italian cream cake, but made without coconut. “I have these in such limited supply that I want the nut to really make a big impact. It’s quite a lot of work to get them, so you want them to be the star of whatever you’re doing.”

At Rondo’s Restaurant in Cincinnati, guests await the annual arrival of chef-owner Ron Wise’s shagbark hickory nut tuile cookie. Wise shapes the tuiles into cups and fills them with fresh fruit and sabayon or ice cream, garnished with a hickory nut.

“The hickory nuts come through flavorful and very rich,” Wise says. “It’s got a great flavor, somewhere between pecan and a walnut. The texture is super crispy. Really, I like everything about it. It’s a real joy when I have them in. I cherish them.”

Susan Goss, chef-owner of West Town Tavern in Chicago, compares the nuts’ short window of availability to other seasonal products: “It’s kind of like really good corn on the cob, or Concord grapes, which are only around for a few weeks. Buy them and use them and don’t hide them. Showcase them in something so you get your money out of them.”

To Goss, that often means using a sprinkling of the toasted nuts as a finishing touch to a dish, such as on her restaurant’s signature salad of wilted greens, grilled onions and house-cured bacon with warm maple dressing. This fall, she’s planning a risotto with “little crispy pieces of suckling pig, a hard squash like a kabocha squash, chanterelles, maybe some Wisconsin Gruyère and then some hickory nuts on top for crunch.”

Guests always have a chance to taste hickory nuts at L’Etoile in Madison, Wis., where chef Tory Miller serves a complimentary hickory nut canapé to guests every day. The nuts freeze well, he says, allowing the restaurant to stock up when the nuts come into season in the fall and use them year-round.

The canapé, a L’Etoile tradition started by founder Odessa Piper, consists of a cracker made in-house from pie crust dough studded with chopped hickory nuts, rolled thin and baked in diamond shapes. Miller tops each cracker with a dollop of fromage blanc laced with herbs and a toasted hickory nut. He compares the nut’s texture to a pecan’s but says the flavor is all wrapped up in the aroma, which he says reminds him of caramel popcorn.

Goss says the beauty of hickory nuts lies in their seasonality and the care required to prepare them.

“I think that hickory nuts are very precious because they are very hard to handle; they’re very fleeting,” she says. “They’re like a beautiful heirloom tomato that can’t be processed and sold commercially. They’re a craft, and I think that that kind of thing is disappearing from our food rapidly and it’s wonderful to hang onto the few that we have left.”