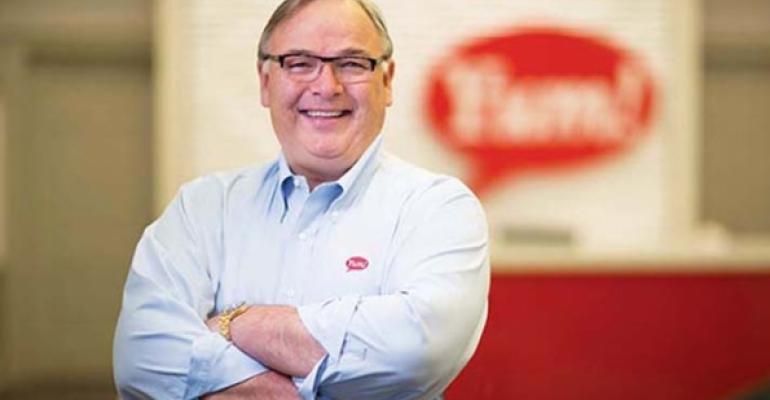 <p>Greg Creed is CEO of Yum! Brands Inc., one of the largest restaurant companies in the world.</p>
NRN 50

Yum! Brands Inc.’s CEO Greg Creed has a busy year ahead of him.

The industry is watching with interest as Louisville, Ky.-based Yum moves to spin off its China division by the end of 2016, in an attempt to turnaround the growing region.

“We believe this transaction is a classic example of ‘one plus one equaling more than two’ as it will enable each company to realize its full potential and achieve greater value on a standalone basis,” Creed said in a statement in December.

This month marks Creed’s first anniversary as CEO of the parent company to KFC, Taco Bell and Pizza Hut, but he offers 20 years of experience working at Yum.

As the former CEO of Yum’s Taco Bell Corp., Creed continues to have great influence on the growing Taco Bell brand. Same-store increased 4 percent in the third quarter ending Sept. 5, and margins were over 21 percent. Creed said the chain’s breakfast offerings have been well received.

“The brand is doing the right things in all the right places,” Creed said in the quarter’s earnings call.

Taco Bell rolled out a new website in the fall where customers can order and pay ahead online. Previously customers could only order ahead on the chain’s mobile app that launched in 2014.

“Taco Bell’s goal is to be America’s favorite Millennial brand, and we are making substantial strides to deliver on that aspiration,” Creed said in a conference call with analysts in July.

Taco Bell’s 200-unit delivery partnership pilot with DoorDash, for example, is aimed at this demographic. And the quick-service chain entered into urban markets with its first Taco Bell Cantina stores in San Francisco and Chicago that serve alcohol.

“Taco Bell is going from strength to strength. KFC continues to build on its momentum and Pizza Hut is in turnaround mode,” Creed said.

Creed said KFC’s sales are still a small part of the global company, but that it had 3 percent same-store sales growth in the third quarter.

As part of the turnaround for the struggling Pizza Hut brand, the chain is going after the value-centric consumer with several promotions, including a new $5 Flavor Menu. For $5, customers can pick two items from a menu with pizza, chicken wings, cookies, brownies, pasta, breadsticks and beverages.

“Value is always important in the food category,” Jeff Fox, chief brand and concept officer for Pizza Hut told NRN last month. “And Pizza Hut has always been known for having great-tasting food, but we want to make sure we are known also for having great value.”

Helming one of the largest restaurant companies in the world, Creed is sure to leave a large imprint on the restaurant industry in 2016.