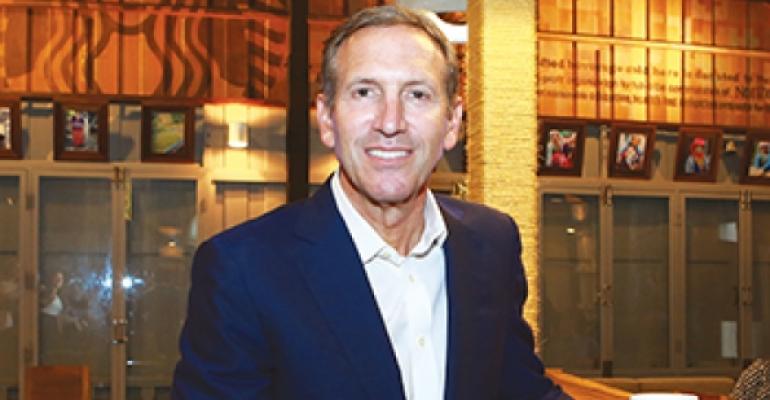 The chairman and CEO of Seattle-based Starbucks Corp. has spent the past few years positioning the coffeehouse brand for digital dominance in the industry.

In 2015, he invested heavily in creating what Schultz calls a digital ecosystem with Starbucks Rewards as its currency. My Starbucks Rewards members, some 10 million strong in the U.S., can earn points by subscribing to The New York Times, streaming music through Spotify or using the ride-sharing service Lyft.

One in seven Americans has a Starbucks card, the company estimates, and $5 billion was loaded onto those cards in fiscal 2015.

Over the course of 2015, Starbucks rolled out mobile ordering and payment to more than 7,500 units across the U.S., and will soon bring the feature to Canada and the United Kingdom, with other international markets to  follow. As of November, 21 percent of Starbucks transactions across the U.S. were done on a mobile device.

And the chain has even begun testing two types of delivery as a seamless component of the mobile app: “Green apron” delivery by baristas in New York’s Empire State Building and delivery by Postmates Inc. in Seattle.

Schultz sees the 23,000-unit chain entering a new phase of expansion as both a brick-and-mortar and a digital retailer.

“Starbucks occupies a front-row seat at the intersection of the physical and digital worlds like no other company anywhere, in or out of retail,” Schultz said in a call with Wall Street analysts after reporting stellar 7-percent same-store sales growth, both globally and in the Americas region, for fiscal 2015.

No doubt, the rest of the industry will be watching closely to see how Starbucks’ digital moves progress.

Technology isn’t the only focus of growth.

Schultz likes to describe Starbucks as “playing the long game” with increasing investments in its workers, innovations in food as well as new more-premium coffees and tea, and flexible store designs.

“Never in our 23 years as a public company has the  Starbucks brand or our business been more relevant or been stronger,” Schultz said in October. “Nor have our  aspirations and the opportunities that lie ahead of us.”