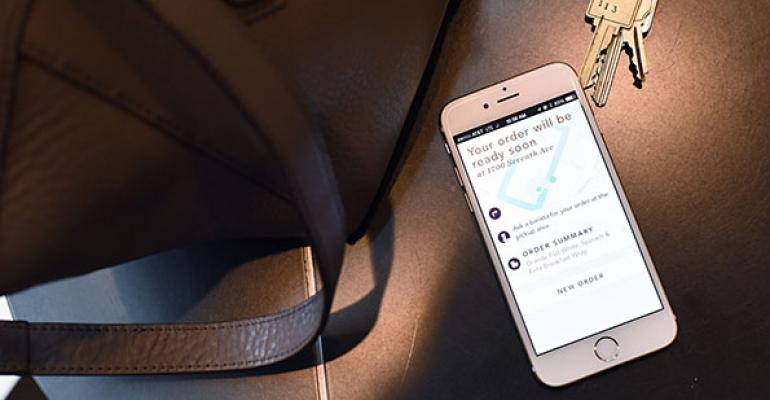 Although in its early days, digital investments are paying off, officials say

Starbucks Corp.’s expanding investments in technology are already proving fruitful, positioning the coffeehouse chain for a new phase of expansion as both a brick-and-mortar and a digital retailer.

“Starbucks occupies a front-row seat at the intersection of the physical and digital worlds like no other company anywhere, in or out of retail,” Howard Schultz, Starbucks chairman and CEO, said during a call with analysts following a strong fourth-quarter earnings report Thursday.

Consumers are adopting the technology faster than the company had anticipated, especially in high-volume locations where lines are the longest. That has increased capacity for those units, said Cliff Burrows, group president for the Americas region and the Teavana brand.

The company is in the process of bringing mobile ordering and payment to the U.K. and Canada, with other international markets to follow.

In Canada, adoption in Toronto has mirrored the U.S., Burrows said. “It just bodes really well for the future,” he said.

In the first half of fiscal 2016, Starbucks will add suggestive selling or suggested pairings to the mobile app, which is expected to further boost incremental sales. Delivery is also on deck to become an added component.

Starbucks chief operating officer Kevin Johnson said the brand also has the advantage of integrating digital sales with its My Starbucks Rewards loyalty program, which now has 20 million members.

“In my 34 years in the technology industry, it is difficult to point to another instance where an in-store experience has been extended to a digital experience in such a seamless and elegant manner,” Johnson said.

Others are trying to follow in Starbucks’ footsteps, he noted. But “where others are attempting to build a mobile app, Starbucks has built an end-to-end consumer digital platform anchored around loyalty,” Johnson said. “This platform enables us to delivery new features faster, create a more integrated experience, and personalize those experiences for the consumer.”

In reports Friday, analysts were bullish on Starbucks’ continued potential, with mobile ordering and payment still in its early days.

Andy Barish, equity analyst for Jefferies LLC, raised his same-store sales guidance for fiscal 2016 to between 4.4 percent to 7 percent, saying mobile ordering and payment, or MOP, is getting noticeable traction.

“MOP has, in its early phases, been widely accepted and is driving increased transactions, particularly in very busy stores (can you say line avoidance) and could drive more ticket (food attach) as suggestive selling/pairing gets put in place,” Barish wrote.

While Starbucks’ investments in technology and employee benefits are costly, impacting growth by about 3 percent, Barish said, the moves are setting the brand further apart from competitors. “Clearly SBUX digital/mobile/loyalty ‘ecosystem’ is light years ahead of everyone else,” he wrote.

During the fourth quarter in the Americas region, the sale of cold-brew coffee helped drive beverage sales at Starbucks, with limited-time offers like the Pumpkin Spice Latte, Salted Caramel Latte and Toasted Graham Latte performing ahead of expectations. Teavana Shaken Iced Teas grew in sales by 20 percent year-over-year.

For the year, Teavana teas overall generated nearly $1 billion in sales in the U.S., rising 12 percent over the prior year. The company plans to roll out the Teavana brand to China/Asia Pacific and the Europe, Middle East and Africa regions in fiscal 2016, Johnson said.

Food sales grew by 19 percent during the quarter, contributing about 3 percent toward the region’s 8-percent same-store sales growth, with breakfast sandwiches as a standout and lunch sales accelerating, Johnson said.

The Evenings program, including sales of beer, wine and small plates, is also now in 100 units and growing.

“The data is clear: Starbucks is increasingly becoming a food destination across multiple dayparts,” Johnson said.

In November, the coffeehouse chain will move into the holidays — marked with a shift to its traditional cranberry-red holiday cups — what is typically its strongest season. Limited-time offers will include the return of the Chestnut Praline Latte, Eggnog and Gingerbread lattes, as well as Peppermint Mocha and Caramel Brulee lattes.

It will also be gift-card season. Last year, Starbucks generated more than $1.6 million in card loads during the holidays, and gift card sales saw a boost from a promotion that offered guests an opportunity to win Starbucks for Life. That promotion will return this year for loyalty club members.

Schultz noted that a few years ago, there were suggestions that Starbucks might be reaching a unit saturation point in the U.S.

However, data indicate that nothing could be further from the truth, he said. With each generation of new locations opening, the latest class performs even better than those opened previously.

The newest class of outlets is generating first-year average unit volumes of $1.4 million, rising nearly 20 percent from three years ago, while delivering record profitability and returns on investment, Schultz said.

The trend is continuing as Starbucks introduces new designs and formats, such as an express unit in New York and drive-thru locations, without any net cannibalization of existing locations nearby.

“We cannot identify any other retailer that can make these kinds of claims, especially in today’s very tough retail environment,” Schultz said.