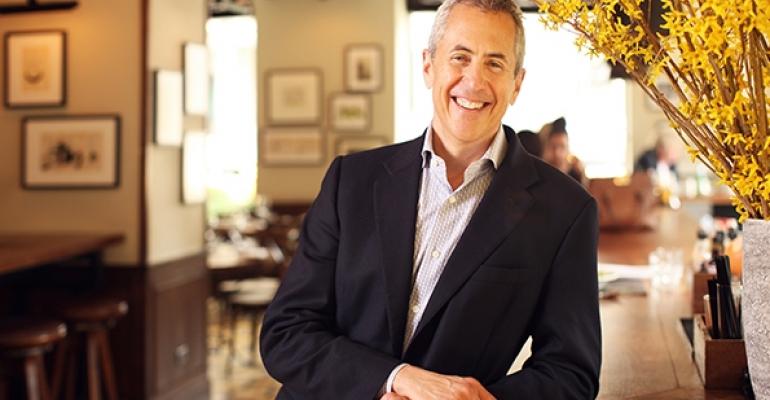 Danny Meyer stepped up his presence in the national restaurant scene in a big way in 2015, with his first stock offering, his investment in a growing chain and his bold decision to do away with tipping at his full-service restaurants.

All eyes are on the CEO of New York City-based Union Square Hospitality Group LLC, making him the undisputed No. 1 on the 2016 Power List.

Meyer started last year with an initial public offering of his better burger chain Shake Shack. He raised $105 million in its initial public offering, and saw share prices more than double in the first day of trading. The IPO gave the then 63-unit chain a valuation of over $1.5 billion, or more than $23 million per restaurant, all by selling burgers, fries and milkshakes.

That’s astounding success for an operator whose background is mostly in fine dining. But for decades Meyer has, in his diplomatic but incisive way, been a disruptor in the restaurant industry.

Meyer started shaking things up with the opening of his first restaurant, Union Square Cafe, in 1985 in what at the time was a derelict Manhattan neighborhood. Five years later, when he began to charge more to pay for the local produce he was buying from his neighbors in the farmers market, he started to change the way New Yorkers looked at food in restaurants.

Over the course of his career, Meyer has experimented with an array of restaurant concepts that fine-dining restaurateurs rarely dabbled with, including a barbecue restaurant and museum cafes.

He went further in breaking down restaurant segment barriers with the opening of limited-service Shake Shack. Originally intended to be a simple hot dog stand with frozen custard milkshakes in New York’s Madison Square Park, the runaway success led to famously long lines, which inspired Meyer to introduce the Shack Cam that let would-be customers check online to see how long the wait looked.

The extent of Meyer’s influence on the restaurant industry became even more clear in October, when he announced plans to end the practice of tipping waitstaff, starting with The Modern, his restaurant at New York City’s Museum of Modern Art, and continuing to all of his 13 full-service restaurants over the course of 2016.

Meyer was by no means the first restaurateur in the United States to do away with tipping, but his announcement elevated the discussion to full-service restaurants across the country.

Operators are awaiting the results of his experience, and several restaurants are looking to follow suit, such as Andrew Tarlow’s New York City restaurants like Diner, and Minneapolis restaurants Victory 44 and Upton 43. That speaks volumes about the influence and respect Meyer has in the industry.

Throughout his career, Meyer has advanced the careers of others, perhaps most notably celebrity chef Tom Colicchio, the head judge of Bravo TV’s Top Chef who was also the executive chef of Meyer’s restaurant Gramercy Tavern.

He has also advocated for better, more professional service in restaurants, and his 2006 book, Setting the Table: The Transforming Power of Hospitality in Business, is considered required reading throughout the industry.

His notion of “enlightened hospitality” has set the standard.

“Understanding the distinction between service and hospitality has been at the foundation of our success,” Meyer writes in his book.

“Service is the technical delivery of a product. Hospitality is how the delivery of that product makes its recipient feel.”

What has guided Meyer through his trend-setting career to date, is the context behind his decisions, he says in his book.

“Context is everything. What has guided me most as an entrepreneur is the confluence of passion and opportunity ... that leads to the right context for the right idea at the right time in the right place and for the right value.”