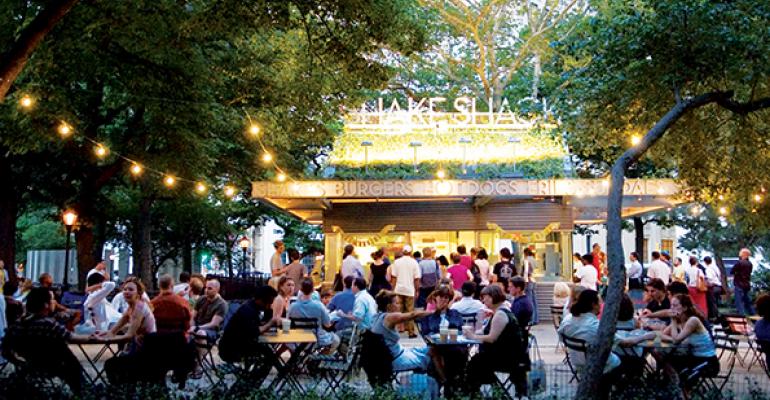 Better-burger chain could raise as much as $100 million

Shake Shack Inc., the New York-based burger chain founded by noted restaurateur Danny Meyer, filed a prospectus Monday for an initial public offering that could raise as much as $100 million.

The 63-unit better-burger operator said it plans to list on the New York Stock Exchange under the ticker symbol “SHAK.”

Meyer's Union Square Hospitality Group LLC founded the first Shake Shack in 2004, with its roots as a hot dog cart that opened in 2001 in New York City's Madison Square Park. It serves “a classic American menu” of premium burgers, crinkle-cut fries, shakes and frozen custard, as well as beer and wine.

“As Shake Shack's board chairman and USHG's chief executive officer, Danny has drawn from USHG's experience creating and operating some of New York City's most acclaimed and popular restaurants, including Union Square Cafe, Gramercy Tavern, Blue Smoke, The Modern, Maialino and Marta, to build what we believe is a new fine-casual restaurant category in Shake Shack,” the company said in its filing.

In fiscal 2013, domestic company-operated Shake Shack restaurants had average unit volumes of about $5 million, according to the company filing. The Manhattan units raised the 2013 AUVs considerably, with $7.4 million per unit, compared with $3.8 million for units outside Manhattan.

Shake Shack’s systemwide sales, which included those in domestic and internationally licensed units, were $139.9 million for the 2013 fiscal year, compared with $81 million in 2012.

Of the 63 Shake Shack locations now open, 31 are domestic company-operated units, five are domestic licensed restaurants and 27 are international licensees.

“We open Shacks in areas where communities gather,” the company said in its filing, “often with high foot traffic and substantial commercial density, such as New York City's Theater District, London's Covent Garden and Dubai's Mall of the Emirates. We have been able to successfully grow across a variety of locations due to our versatile Shack formats and designs that are tailored to reflect each Shack community's core attributes.”

In an accompanying letter to prospective stockholders, Meyer and Randy Garutti, Shake Shack’s chief executive, noted that the company was able to grow during difficult economic times.

“We've never believed that Shake Shack only thrives in a down economy, but growing from one to 15 Shacks smack dab in the heart of the recession told us that we also don't need a robust economy to build our business.”

Correction: Dec. 29, 2014  This version of the story clarifies that the initial public offering could raise as much as $100 million, though the number of shares and pricing are not yet determined.