Taking brands to the next level

• Denyelle Bruno knows fast-growing brands. At Apple, she helped launch the first 25 Apple Stores. At Drybar she opened 55 locations in three years. Now, as president and CEO of Tender Greens, she’s leading the 29-unit fast-casual brand as it looks to double its footprint in the next year. 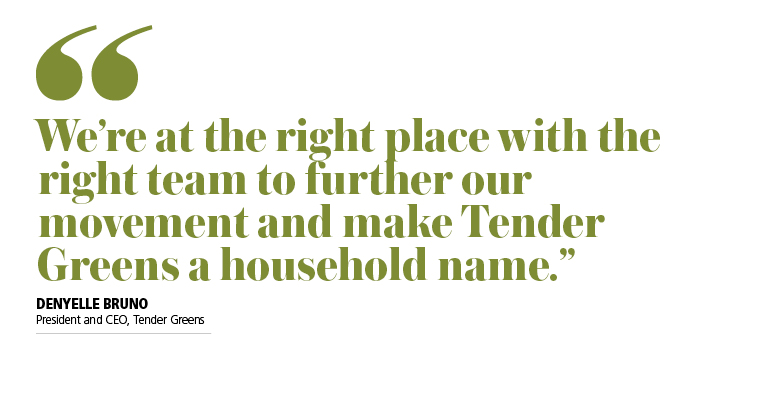 • Bruno was tapped as president in 2017, with executives saying she could help the company grow “faster and better than we can do alone.” She was named CEO the next year, replacing co-founder Erik Oberholtzer, who is now executive chairman.

• Since she joined Tender Greens, the chain has opened five new restaurants and made its debut in the New York City and Boston markets.

• Her career path — which also includes a stint at Peet’s Coffee & Tea — gives her a unique understanding of the customer. As she told Fast Company last year: “The person who would buy an Apple computer would drink Peet’s Coffee, get a blowout at Drybar and eat at Tender Greens.”

• Up next: What else? More growth. “We’re at the right place with the right team to further our movement and make Tender Greens a household name,” Bruno said last year.