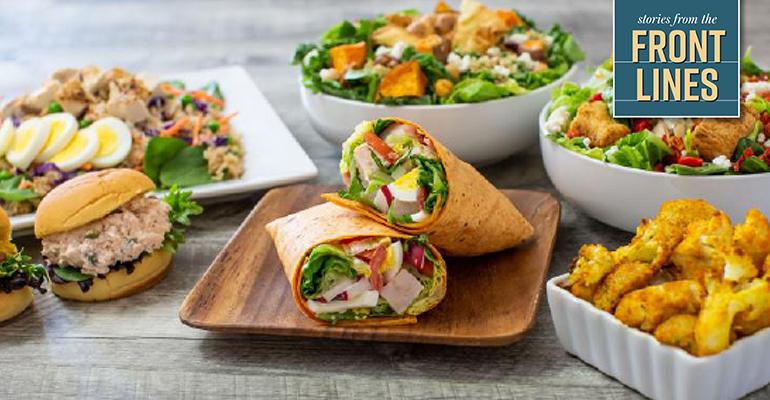 How Giardino Gourmet Salads worked with its Florida community to survive the pandemic, and how COVID changed the business permanently

Giardino Gourmet Salads has 14 locations in Florida, mostly around the Miami area, but co-founders Ody and Kenny Lugo were more concerned about keeping workers safe than reopening within Florida’s guidelines.

I spoke with Ody Lugo just a few days after Gov. Ron DeSantis lifted restrictions entirely on the entire state of Florida. But, for Giardino, nothing changed.

The Lugos kept the restaurant open during the entire pandemic, even opening a new location during these times, but they were not going to compromise the safety of their staff or customers at any point.

“We see masks as something we will keep in our business long-term,” said Ody Lugo. She says everyone will one day see serving without masks the same way smoking on a plane has become a relic of the past.

“I think that it was almost a blessing in disguise that we’ve had to put some procedures in place,” she said.

As owner of a heavily franchised business, Lugo had to become a jill of all trades when the virus came to the U.S. in March.

She was sending daily announcements with safety information to her franchisees in what she called “a full press announcement.”

“I was an accountant or a lawyer or a doctor [at any given time]. I took a little classes here and there on how to become it all in order to have answers for [franchisees],” Lugo said.

She felt it was her responsibility to help her franchisees because “they believe in the business enough to invest money and build a franchise, the least I can do is support them.” That meant figuring out the application process for Paycheck Protection Program loans and communicating it to all 13 franchisees, researching other loans and grants available, finding cleaning solutions for her owners, relaying city and state regulations and learning about employee safety.

Though locations remained open, employees were furloughed because business still wasn’t flowing, so some units began to move to alternate sources of revenue.

Lugo’s catering business was busy during the pandemic, surprisingly enough. That’s because people were buying hospital employees, firefighters and other frontline workers platters of food or catering a meal for the business and using Giardino.

“That is what gave us the opportunity to stay in business, because we obviously didn't have any customers coming in,” she said. “But it felt like a ghost kitchen at times. People pumping out orders online for delivery.”

Ultimately, Lugo felt that Giardino had to be there for the community and show up in whatever way that meant, even if just by keeping the doors open.

“The message of us being here was more important than sales,” she said. “The connections we’ve made [in the community] turn out to be more emotional than financial.”

During the pandemic, Lugo made a name for herself on national television when the video she and other Miami business owners went viral.

Lugo and her husband had decided to contact local businesses, including those in direct competition with her own business, in a WhatsApp group chat aimed at putting small business owners’ faces out there.

“At the end of the day, we feel that there was more than enough business out there for everyone,” she said.

As Lugo spoke about her employees and their bravery as frontline workers in the early days, she began to tear up.

“Everything you worked for for years, your rug just got swept away,” she said. “When you have employees that you can't give an answer to [it’s hard]. I know we were all in the same boat and franchisees that have given so much and have sacrificed so much to open up your business. You have a heavy weight of responsibilities. And we feel that weight.”

As the pandemic enters its eighth month, Lugo says she is hearing about new franchisees (even signing one during the pandemic) and investors who are interested in growing businesses that survived. There may be a Giardino Gourmet Salad outside of Florida soon enough.