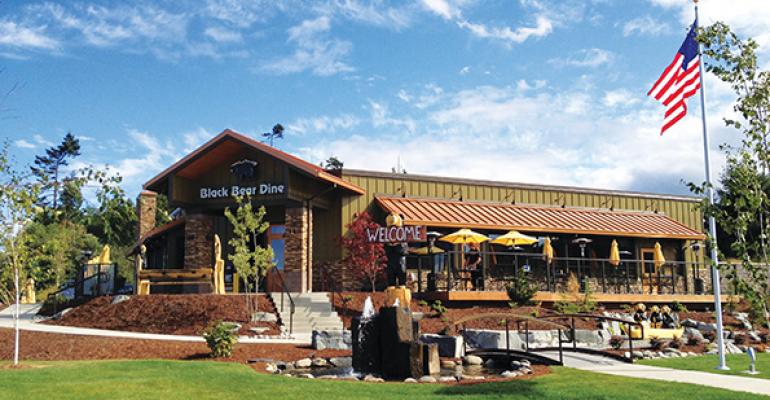 At Black Bear Diner, it’s all about value — and bears.

The concept, founded in 1995, competes with brands ranging from Cracker Barrel to Mimi’s Café and offers a menu of homestyle dishes with “bear-sized” portions, from the popular chicken-fried steak to a tri-tip platter. Unlike most family-dining concepts, however, Black Bear offers beer and wine.

The average check is about $13 per person. Restaurants are typically between 4,800 and 5,800 square feet.

Based in Redding, Calif., Black Bear has grown to include 63 units in eight states, though core locations are across Northern California.

Four more are expected to open before the end of 2014, with another eight to 10 planned next year. The company aims to reach 100 locations by 2018.

Currently, 46 of the restaurants are franchised and five are corporate owned, with another 12 considered “affiliated licensed” restaurants owned by company executives.

The chain had $135 million in U.S. systemwide sales in 2013, a nearly 24-percent increase over the prior year. The company won’t disclose same-store sales, but said sales trends have been positive for 14 consecutive quarters.

Black Bear ended fiscal 2013 with 61 locations, a nearly 13-percent increase over the prior year, and estimated sales per unit were $2.3 million, up 11 percent.

Even daypart sales: Sales are roughly split evenly between breakfast, lunch and dinner, with dinner accounting for about 35 percent of sales. Family-dining competitors like Denny’s and IHOP, meanwhile, are struggling to build their evening business.

Value: The portions are generous and guests feel they are getting a lot for their money.

Anti-chain: No two restaurants are the same, though they all incorporate a certain namesake animal in the decor, including black bear totems carved from logs and black-bear-themed murals.

Relaxed atmosphere: It’s come-as-you-are and bring the kids. Servers wear jeans and suspenders and guests pay at a cashier on their own timing.

Authenticity: “We never intended this to be a chain. Mt. Shasta isn’t exactly a bastion of brand development,” said David Doty, Black Bear’s chief marketing officer. “It’s really the consumer that’s been pulling us along. The brand just resonates with them.”

View the other Next 20 standout brands: