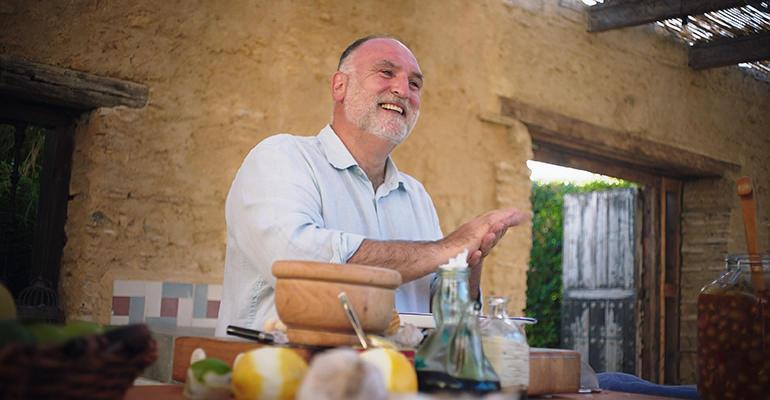 In a video posted Friday, the chef and restaurateur discusses how the Biden administration’s American Rescue Plan is helping hungry Americans

José Andrés — chef, restaurateur, and activist — has long served as a voice for those who don’t know where they’ll get their next meal. In disaster zones and throughout the pandemic, Andrés and the World Central Kitchen nonprofit organization he co-founded have mobilized the foodservice community to do what they do best: feed people who are in need.

Now Andrés is joining forces with the White House to win the battle against food insecurity.

In a video published Friday in partnership with the White House — which Nation’s Restaurant News was given first look — Andrés promoted the American Rescue Plan’s $12 billion in funding to tackle pandemic-era food insecurity.

The video highlights Andrés’ continued activist interests in emergency aid and helping to end poverty and hunger in the United States. World Central Kitchen, for example, has provided 36 million meals to people in need since the start of the COVID-19 pandemic.

“In this pandemic I have been in many communities across the country, the forgotten neighborhoods: many of Black Americans, Latino, Native Americans,” Andrés said in the video. “In this pandemic, they suffered the most because when everything was shutting down these people were forgotten and that’s something we cannot allow.”

The $12 billion Andrés refers to includes expanded funding for key assistance programs, such as:

“With the American Rescue Plan […] I know we will emerge out of this humanitarian food crisis stronger,” Andrés said in the video.

But with more than 4 million Americans out of work for longer than six months, the question remains: Will this boost from the COVID-19 relief package be enough for struggling Americans to get by through the end of this economic crisis?

Officials with the childhood hunger nonprofit No Kid Hungry called the Rescue Plan “a critical step in the right direction in addressing the nation’s hunger crisis.”

Those with Washington, D.C. poverty and hunger-focused nonprofit organization, the Food Resource and Action Center, or FRAC, however, believe that more help is needed.

Ellen Vollinger, legal director for FRAC said that for many, SNAP benefits are not enough to get by month to month. The organization also believes restaurants should have been utilized as a resource during the current crisis to address the growing food insecurity issue.

"Throughout COVID-19, we have called on policymakers to facilitate restaurants as an additional food access point, including for SNAP customers,” Vollinger said. “Additional progress could be made by adopting policies proposed in the last Congress by Sen. Chris Murphy (D-Conn.) and Rep. Jimmy Panetta (D-Calif.) to adapt the SNAP Restaurant Meals Program to enable more SNAP purchases for meals prepared by restaurants."

During the pandemic, Andrés called upon restaurants to aid in the hunger crisis — and many answered that call through World Central Kitchen’s Restaurants for the People program. The effort helped many restaurants keep their doors open during pandemic-related lockdowns.

Most recently, Panera Bread partnered with Andrés and World Central Kitchen to combat food insecurity by donating $1 for every full-sized sandwich purchased at the bakery and café chain through the end of March, up to $100,000.

In January, he also worked with members of Congress to reintroduce the bipartisan FEED Act, a separate program from the American Rescue Plan that would allow the Federal Emergency Management Agency, or FEMA, to supplement a greater share of the costs to state and local governments so that restaurants and nonprofits can partner together to provide meals for people in need, in a program similar to Andrés’ own Restaurants for the People program.

Biden signed an executive order in February to direct FEMA to cover 100% of the costs needed to help restaurants partner with local soup kitchens and food pantries, instead of the typical 75%.

Still, over the past seven weeks since Biden signed the executive order, FEMA has made no discernible movement to issue implementation guidance for state and local authorities, according to No Kid Hungry.

Instead, the agency “has been encouraging local jurisdictions to begin implementing plans to work with nonprofits and restaurants in their communities to submit those plans to FEMA for approval.”

Restaurant operators are hoping for clarity.

“So far, absolutely no one I have spoken to has any idea how to initiate this program,” said Tony Clark, owner of the Kingston Ale House in Kingston, Wash., in an email to NRN. “I have spoken to my Congressman, Derek Kilmer, my State Representative, Christine Rolfes and my County Commissioner, Rob Gelder. I even sent an email to FEMA only to get a ‘go ask your local folks’ response. […] The executive order was signed seven weeks ago and so far I don’t think a single meal has been provided in Washington state.”

FEMA did not immediately respond to requests for more information on how restaurants can get involved with feeding their communities.