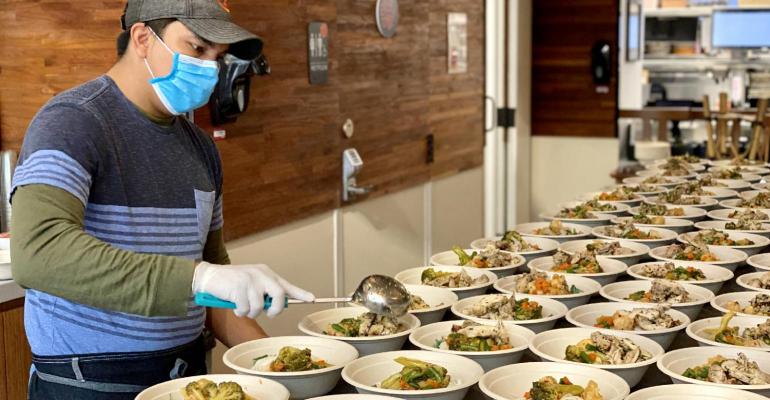 Immigrant Food
More restaurants like Immigrant Food in Washington, D.C. will be able to keep their doors open by helping Americans in need.
News

On Feb. 2, President Joe Biden signed an executive order to do just that: directing the Federal Emergency Management Agency, or FEMA, to cover 100% of the costs needed to help restaurants partner with local soup kitchens and food pantries, instead of the typical 75%.

By announcing the executive order, Biden bypassed the legislative process the FEED Act needed for approval.

“The executive order means we won’t have to worry about whether or not the bill is going to languish in legislative limbo,” Monica Gonzales, director of federal advocacy at Share Our Strength’s No Kid Hungry campaign, said in a statement. “This measure brings forward every resource the government has to address this national hunger crisis and opens the door to innovative ways in which we can feed children.”

In return, restaurants would be able to use the funding to keep their doors open, keep their employees on staff and stave off some of the harshest economic effects of the pandemic.

“The real key here is that every dollar that goes back into these restaurants ends up paying for staff, paying for the food coming from suppliers,” Nate Mook, CEO of World Central Kitchen, said in a statement. “It keeps that economic engine going so that the business can keep running and [restaurant workers] can keep buying food so they don’t become food insecure themselves.”

While World Central Kitchen was already doing similar work during the pandemic, by calling upon restaurants to help feed the hungry, Mook said they were limited by private donations. With the backing of the federal government, more restaurants will be able to get involved to secure contracts with nonprofits.

Following the signing of Biden’s executive order, state and local governments will be able to immediately take advantage of the FEMA funds.

Nation’s Restaurant News contacted No Kid Hungry for further information on how restaurants can get involved with these FEED Act partnerships but did not receive an answer in time for publication.