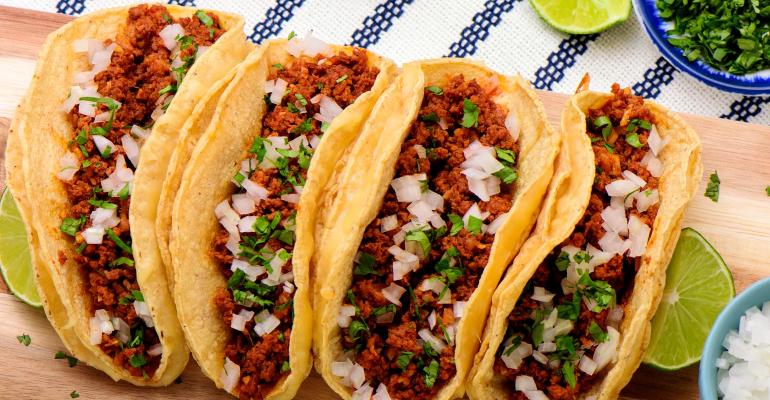 Mexican food favorites, authentic ingredients can help to boost sales beyond the fifth of May.

If Cinco de Mayo food and drink specials keep the seats full all day, why not make the most of a good thing and extend them for a longer period of time? Consider celebrating the popular and festive fifth of May for a weekend, a whole week or even with a seasonal LTO.

Longer-lasting restaurant promotions featuring fun, flavorful menus of authentic Mexican ingredients promise to make Cinco de Mayo an even more dynamic engine for generating restaurant traffic and sales. The May event is like St. Patrick’s Day as an annual festival of food, drink and good cheer. Consumer participation is rising, if not yet to the scale of the Irish shindig.

More of a good thing
Not surprisingly, a strong case can be made for doing more with Cinco de Mayo food and drinks. For one thing, there’s the enormous and continuing impact that Mexico has on U.S. culture. For another, there’s the growing consumer fascination with bold, complex global cuisines, of which Mexican is exemplary.

With that in mind, it's worth noting that May fifth falls on a Sunday this year, signaling an opportunity for Cinco de Mayo-inspired Sunday brunch dishes. That is especially promising given the versatility and appeal of Mexican ingredients like Chihuahua® cheese, queso fresco and chorizo sausage in breakfast and brunch cookery.

“When St. Patrick’s Day falls on a Sunday, people also celebrate on Thursday, Friday and Saturday,” says Brian Lanucha, head of insights and thought leadership at V&V Supremo Foods. “Cinco de Mayo has the potential for that as well.”

“You could make a weekend of Cinco de Mayo specials, at least,” says Kevin Karales, V&V Supremo Foods’ corporate chef. “If you want to push it further, you could do all of May. People are always looking for a reason to party.”

Running creative riffs and LTOs
Although Americans often confuse it with Mexican Independence Day, Cinco de Mayo — Spanish for “May fifth” — marks the Mexican victory over France in the 1862 Battle of Puebla. It is not a widely celebrated holiday in Mexico outside the state of Puebla. In this country, though, it can be a vehicle for cultural pride and festivity.

An increasing number of restaurants of all sorts — including general-market, non-Mexican places — are running Cinco de Mayo holiday specials, LTOs and food-and-drink pairings with Mexican food and drink products. Here are some highlights from last year’s festivities:

Beverage pairings offer vast promotional promise as well. Heading the list is the versatile margarita, “mixable in a billion flavors,” as Karales says. Mexican tequila and mezcal are winning praise in the cocktail world. Popular Mexican beers are refreshing, easy-to-drink partners for foods with big flavors.

Authenticity is the ticket
Whatever items appear on the Cinco de Mayo menu, they can be made more enjoyable and marketable by preparing them with authentic Mexican ingredients.

For example, Chihuahua® cheese is the choice for dishes that need a flavorful melting cheese, such as tacos, burritos, enchiladas and nachos as well as many non-Mexican applications. It has been called the ultimate cheese for making quesadillas, which appear on a growing number of menus. “Everybody is doing a quesadilla these days,” says Karales. “Chihuahua® really fills the bill, with its rich butteriness, mild flavor and nice stretch.”

“There’s opportunity for Cinco de Mayo to keep growing into more of a mainstream holiday,” says Lanucha. “It has potential to be the next St. Patrick’s Day.”

Operators can boost sales by offering Cinco de Mayo food & drinks featuring authentic Mexican ingredients around the fifth of May.