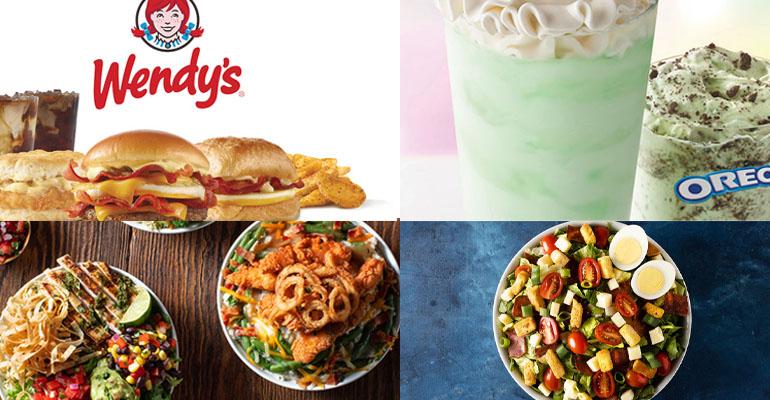 Wendy’s is rolling out a comprehensive breakfast menu in early March, including burritos, biscuits and egg croissants, plus a breakfast version of its Baconator and a “Frosty-ccino” made with its signature Frosty mix. Read on for full details, except for prices, which haven’t been announced yet.

In other news from major burger chains, McDonald’s is bringing back its Shamrock Shake nationally for the first time in three years, and accompanying it with an Oreo Shamrock McFlurry.
Just Salad isn’t launching breakfast, but it is offering a “breakfast salad” this month with ingredients such as turkey bacon and hard-boiled egg.

Both Applebee’s and Black Angus Steakhouse are jumping on the bowl bandwagon. B. Good was already there, but now it has one with noodles made from butternut squash.

Erbert & Gerbert’s has two sandwiches with the same toppings, but it’s calling one a bánh mì and the other one an Asian Fusion sandwich.

Bruster’s Real Ice Cream has two chocolate-and-red-fruit specials in time for Valentine’s Day while Dog Haus is sharing the love in a different way, collaborating with a famous chef and giving the proceeds to No Kid Hungry.

In pizza news, Uno’s has a new entry in its De-Lite line, and Pieology has introduced a new sort of crust made mostly from chicken.

Sonic Drive-In is taking its popular tots, adding nacho toppings and calling them Totchos, and Velvet Taco has another weekly taco feature — this one with cauliflower.