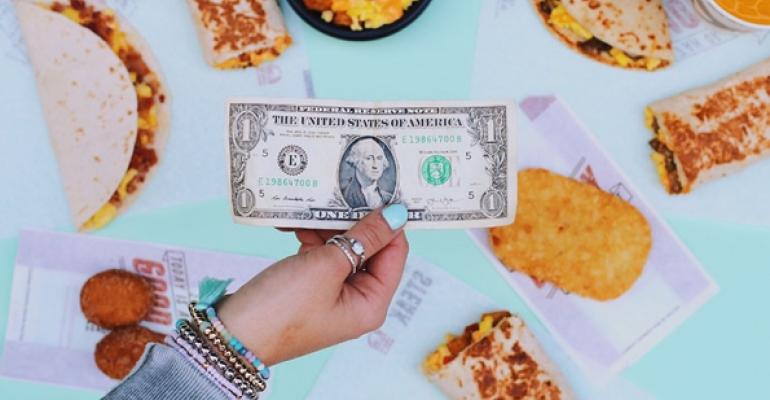 Just when you thought the dollar menu was dead, Taco Bell on Thursday threw down a breakfast gauntlet with the launch of a new $1 Morning Value Menu with a choice of 10 options.

The menu platform, scheduled to be available at the chain’s roughly 6,000 domestic units nationwide, will include several existing items, including a grilled Breakfast Burrito, a two-pack of Cinnabon Delights, hash browns or a Mountain Dew Kickstart Orange Citrus drink, each for $1.

Among the offerings are also three new dishes:

• A Breakfast Soft Taco is available with a choice of bacon or sausage, with scrambled eggs and Cheddar cheese.

• The Sausage Flatbread Quesadilla has scrambled eggs and sausage with a three-cheese blend wrapped in a “pillowy” flatbread.

The Irvine, Calif.-based chain shook up the quick-service breakfast space when it launched the morning daypart for the first time in 2014. At the time, the breakfast menu included a value component with several items priced at or under $1.

The chain also has featured a Dollar Cravings menu for later-daypart items since 2014.

Emili Matsumura, brand manager for Taco Bell Corp., said the new and improved morning menu is a complete overhaul and expansion of the original value offerings, bringing more choice and different flavors than ever before.

“What our consumers told us is that as they look around at the breakfast landscape, when it came to everyday value, they saw something lacking,” Matsumura said. “They’ve really started to see prices creep up over the last couple of years.

“Consumers expect value from Taco Bell,” she added. “So we had to translate that to breakfast.”

Burger King earlier this year announced a 5 for $4 meal promotion, including a Bacon Cheeseburger, small fries, four-piece chicken nuggets, a small drink and a cookie. At breakfast, a 2 for $4 deal included the option of various Croissan’wiches.

Wendy’s has a similar limited-time offer of a 4-for-$4 meal, including a Jr. Bacon Cheeseburger, four-piece chicken nuggets, fries and a drink for $4.

McDonald’s offered a McPick menu with two items for $2, including premium options like the Quarter Pounder with Cheese and a Big Mac, though breakfast items are not an option.

Carl’s Jr. and sister brand Hardee’s in January launched a $4 Real Deal, including a Double Cheeseburger or a Spicy Chicken Sandwich, fries and a drink.

Although the leading quick-service chains may offer items for $1 or less, value menus are no longer often promoted with the $1 price point. In 2013, for example, Wendy’s shifted its 99-cent value menu to the existing “Right Price, Right Size” menu, which allows room for items priced above $1.

Taco Bell has been hinting at the launch of the new $1 Morning Value Menu using the apps Wishbone and Slingshot for the first time.

Wishbone is an app targeting teenage girls and is similar to its male-focused brother Slingshot. Both allow users to vote on simple comparisons of products.

A comparison on Wishbone on Wednesday, for example, showed a photo of a Taco Bell breakfast burrito compared with a rather boring looking bowl of oatmeal.

The chain is also launching a full court press through other social media channels on Thursday, as well as TV and radio, Matsumura said. “You’ll see us everywhere.”

Critics of dollar menus have long pointed to the tiny portion size of value items. Matsumura, however, said Taco Bell’s offerings would be hearty and filling.

Though still relatively new, breakfast has grown to a consistent 6 percent of sales at Taco Bell, Matsumura said. The new value menu, however, is expected to give that sales trend a boost.

“We want to grow that, and by giving consumers what they want, we hope the morning value menu will step change that business,” Matsumura said.