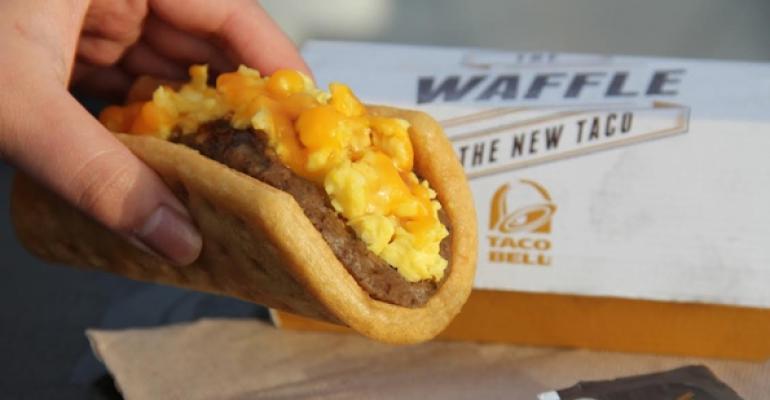 Promising the biggest marketing push its 52-year history, Taco Bell rolled out the offer of breakfast to 5,500 restaurants nationwide on Thursday with television ads featuring Ronald McDonald — but not the familiar quick-service clown mascot.

In what is clearly a jab at breakfast market-share king and quick-service competitor McDonald’s, Taco Bell’s new commercials, created by ad agency Deutsch LA, feature real people named Ronald McDonald. These various men named McDonald hail from across the U.S. and all profess their love for Taco Bell’s signature breakfast items, including the famed Waffle Taco, the A.M. Crunchwrap and Cinnabon Delights.

For Taco Bell, the national rollout of breakfast marks a bold push into an increasingly crowded daypart, which company officials said requires an extraordinary marketing plan.

“This isn’t a launch like a limited-time offer or doing a great new product. It’s a whole daypart and a new era for Taco Bell,” said Chris Brandt, the Irvine, Calif.-based chain’s chief marketing officer. “Every marketing lever we have, we’re going to pull for breakfast.”

The plan includes national television spots, radio, digital and social media, with Taco Bell officials making the rounds on morning shows. Taco Bell president Brian Niccol was scheduled to participate in a Reddit “Ask Me Anything,” or AMA chat, with consumers on Thursday to get their feedback.

With the launch, Taco Bell finally revealed the recommended pricing for the morning menu, which varies by location. Generally, the chain is positioning its breakfast menu as a value-focused alternative to brands that have long dominated during the morning daypart. “We’re asking people to change their routines a little bit, so you have to give them something to change their routines for,” said Brandt. “We feel we have the right products, the right pricing and the right positioning.”

Among 13 new items on the breakfast menu, here is the pricing for what are expected to be top sellers:

• The A.M. Crunchwrap, Taco Bell’s version of a portable breakfast sandwich, will be available with bacon, scrambled eggs, hash browns, and cheddar, wrapped in a warm grilled tortilla for $2.49. A version with sausage is the same price.

• The already-beloved Waffle Taco, which has generated much social media buzz, includes a waffle wrapped around a sausage patty or bacon with scrambled eggs, served with a side of syrup. It is priced at $1.99.

• The Breakfast Burrito with bacon, scrambled eggs and melted cheddar is $1.69. At the higher end, a Steak and Egg Burrito, with scrambled eggs, melted cheese and marinated thick-cut steak in a tortilla is $2.49.

• For $1, guests can enjoy various versions of A.M. Grilled Tacos with sausage or bacon, scrambled eggs and melted cheese in a folded grilled tortilla.

• The Sausage Flatbread Melt, a warm flatbread filled with sausage and cheddar, is also $1, and so are the Hash Browns.

• Coffee is $1.49, either hot or iced. The restaurants are using a single-cup brewer, so coffee can be brewed to order. During peak times, however, restaurants will have a brewed carafe on hand to pour for faster service.

Taco Bell will introduce a more complex coffee platform later on, but Brandt said the goal with the current launch is to keep things simple and make operations as smooth as possible.

Taco Bell has been building breakfast excitement for years. “First Meal” was first offered in about 750 restaurants in 10 Western states in 2012, and the chain later expanded the test to about 900 units, refining the menu over time, until it settled on the core A.M. Crunchwrap/Waffle Taco/Cinnabon Delights trio.

Last week, Taco Bell began whipping the social media frenzy by sending about 1,000 “influencers” Breakfast Phones, Samsung models with limited minutes. Once enabled, recipients were buried in an avalanche of pre-recorded calls and texts prompting the user to attempt various “missions,” such as tweeting their favorite breakfast item.

Participants received various prizes — no doubt, soon-to-be collector’s items — such as a Taco Bell watch or a Waffle Taco pillowcase or air freshener.