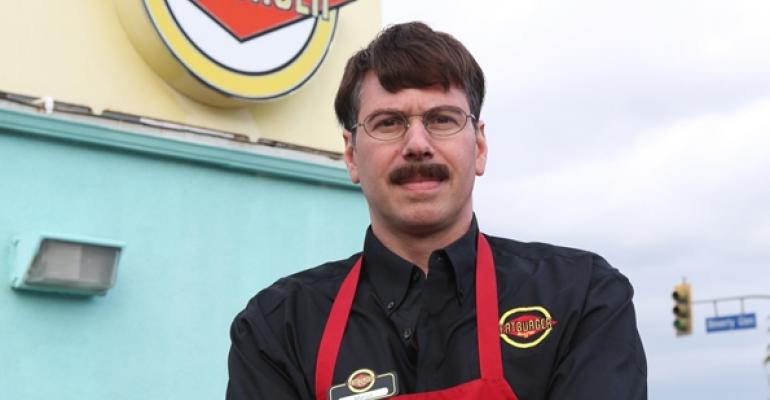 Fatburger chief executive Andy Wiederhorn donned a wig and fake mustache to become the next “Undercover Boss” in an episode of the television show scheduled to air Friday.

Wiederhorn joins a growing list of restaurant industry leaders that have made an appearance on the pseudo-reality show on CBS, which puts top executives in disguise and places them in entry-level positions in their own restaurants to get a store-level view of what it’s like to work there.

Wiederhorn, whose episode is scheduled to debut Friday at 8 p.m. EST, said he asked CBS for the opportunity to go undercover, saying he really wanted to see “what was going on in a way that I wouldn’t see if I walked in the front door with a suit on.”

What Wiederhorn learned is that Beverly Hills, Calif.-based Fatburger’s 140 restaurants needed better employee recognition programs and that staffers also needed a way to get their ideas to top management. In addition, he said, “I was really impressed by how employees give their best at work and leave their personal problems at home."

Throughout the past few years, other restaurant chain executives also shared with NRN the key takeaways from their experiences of going undercover.

Damico of Moe’s did the show with the hope of bringing national exposure to the growing regional brand, which is part of Atlanta-based multi-concept operator Focus Brands Inc.

After it aired in January, the company received 170 leads from potential franchisees, same-store sales rose 4 percent to 5 percent, and traffic increased 5 percent in the weeks following the show for the nearly 500-unit chain, he said.

The chain also saw a jump in social media activity, with visits to the Moe's website growing from about 12,000 hits per day to 78,000 on the day the episode aired.

Silva at the Tampa, Fla.-based Checkers, whose episode first aired in February last year, also said his appearance on the show helped boost same-store sales that year. Checkers and sister brand Rally’s have about 290 locations.

Beyond sales boosts, Checkers' Silva also said the show resulted in a new incentive programs for store team members and the creation of a general managers council to discuss goings on at the restaurant level more regularly.

Lynch of the 70-unit Tilted Kilt, based in Tempe, Ariz., also saw the need to address happenings at the restaurant level as a result of his appearance on the show, which aired in November 2012. He said he learned that his staff needed to more carefully monitor interactions between servers and guests.

“We hire a lot of servers who are 18, 19 and 20 years old. We put them in an adult environment," he said. "Those young people need a little more guidance than just owners and managers can give them.”

Cinnabon's Cole, whose episode also aired in November last year, said she was particularly moved by the personal stories of employees at the 1,000-unit chain, also owned by Focus Brands.

“I was most moved by how young and energetic and sweet and great our employees are,” she said. “I knew it, because I’m in the bakeries all the time. But (I was) working side-by-side with them and hearing their stories of how they are trying to pay for school or trying to raise their kids and just being reminded of their day-to-day life. Remembering what that was like for me was incredibly powerful.”

Similarly, after appearing on Undercover Boss in April 2011, Kim of Irvine, Calif.-based Baja Fresh said he was inspired by the people who worked for the company by “getting to know their hardships, what makes them really happy, who they are and how they care for other people in the company.”

Baja Fresh's Kim also came away realizing the brand needed to do a better job of communicating that food is made from scratch in restaurants. That realization translated to tweaks in marketing about the chain’s quality ingredients and freshness.

Fuller, at Johnny Rockets, based in Aliso Viejo, Calif., appeared on the show in December 2010. Describing himself as analytical and “process driven,” Fuller said he learned that the company would make better decisions if more front-line staffers were included, as well as franchisees and those in the trenches.

“We should get the front-line guys involved in part in our thinking because they have some credible experiences or thoughts that we should try to capture,” he said of the chain's 330 units.

At the 39,000-unit Subway based in Milford, Conn., Fertman, whose episode aired in November 2010, said he wanted to send more upper management executives to work at the store level to better understand “the interaction between sandwich artist and the customer.”

“I wanted to catch people doing things right, and that’s what I found in the field," he said. "The four stores all had great employees with great ideas on how to make the business better. We need the right mechanism to harness these ideas.”

Correction: April 4, 2013 An earlier version of this story incorrectly listed Fatburger’s former headquarters in Santa Monica, Calif. The company is now based in Beverly Hills, Calif.