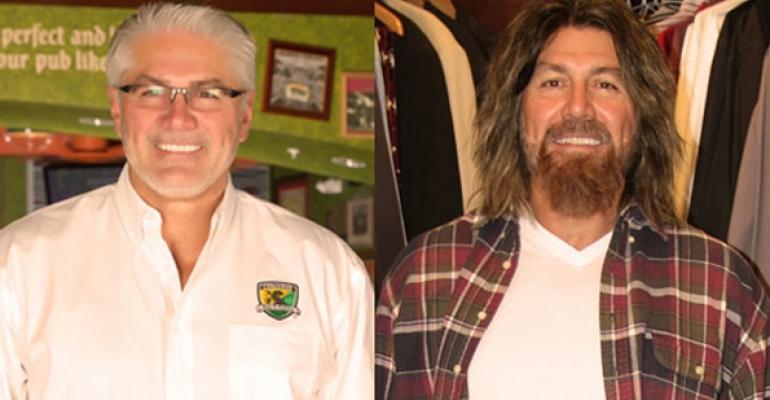 The executive worked in disguise to learn more about his business

Ron Lynch, president of the Tilted Kilt Pub & Eatery, will make appear Friday on the CBS hit television series “Undercover Boss,” an acting gig that he says allowed him to learn more about his business.

The developer of the 70-unit Tempe, Ariz.-based sports pub, which falls into the growing “breastaurant” category, joins other restaurant executives who have appeared on the show, including: Rick Silva, chief executive of Checkers Drive-In Restaurants; Coby Brooks, former chief executive of Hooters of America LLC; and David Kim, chief executive of Baja Fresh Mexican Grill.

Kat Cole, president of Cinnabon Inc., is scheduled to appear on “Undercover Boss” in an episode that airs Friday, Nov. 16.

For the show, Lynch worked in disguise in several positions at the units, including bartender, line cook, manager and busser/security guard.

Lynch said he approached the idea with some concern. “We’re a very edgy concept and you worry about how we’ll come across on TV,” he said. “That’s all swirling through your mind.”

But he added that he enjoyed the project and learned that his staff needs to “move up on [the] front line and hear what your servers are saying to the guests.”

He recently talked with Nation’s Restaurant News about his “Undercover Boss” experience.

That was one of the first questions I asked when I was talking to ‘Undercover Boss.’ I told them [the employees had] never seen me in person — only on the website. I’m 6-foot-6, 250 pounds and have white hair. I kind of stand out a little bit. And they said, ‘Don’t worry about it. We’re aware of that. And we’re good at this.’

What disguise did you end up with?

They put a wig on. I was fitted for the wig. That wig was glued on my head. I kept that part on for the whole time. And each morning they would dye my white beard, which they’d had me grow it for about a few weeks so they’d have something to attach that ugly goatee onto. It was [made from] yak hair.

Any complications from that?

I had so much yak hair in my mouth during that time. I was hoping it had a little protein in it. I thought I was going to cough up a fur ball.

What was your fictional backstory?

My name was Ryan Goode. If the people I was participating with had a question, I had an answer for them. I was asking probing questions about them to find out about their life.

What did you learn from participating in the show?

The No. 1 thing for me was that we hire a lot of servers who are 18, 19 and 20 years old. We put them in an adult environment. Those young people need a little more guidance than just owners and managers can give them. They need somebody mentoring with them. That’s the No. 1 thing. I also realized our managers need to get up a little closer … to the front line to hear what’s happening at that table.

You have family members in your business. How did you find your culture in Arizona was making it to the actual units?

I was really pleased. I had a couple I worked with even state our guiding principles.

We bring in owners and managers for the training program — we have what we call a 'brand class' to talk about the purpose of the Tilted Kilt business and our guiding principles — and build off that foundation.

What we do is unique. We’re really in the entertainment business. People really have to understand that. We do that with sex appeal. We don’t back off from that one inch. But we are PG-13 at the same time.

Our No. 1 guiding principle is to portray class in all things. If we miss that mark, we’ll slide down to where some of our other competition is. And that’s not a place where I choose to be.

Was there anything you heard as Ryan Goode that you wouldn’t have heard as Ron Lynch?

Absolutely. Those people talked to me like I was one of their peers. And heard things like, 'I have these good ideas, and I tell them to my manager and that’s the last I hear from them.' … I heard that several times. I also heard things that didn’t portray class. That’s bothersome.

Any changes in your business from the show?

Yes. We’re going to have some programs for those young people. I think it will protect them and protect our brand.

Will Ryan Goode make a return?

If I could get the same makeup people to do that same job, who knows? I might try to pull it off again.