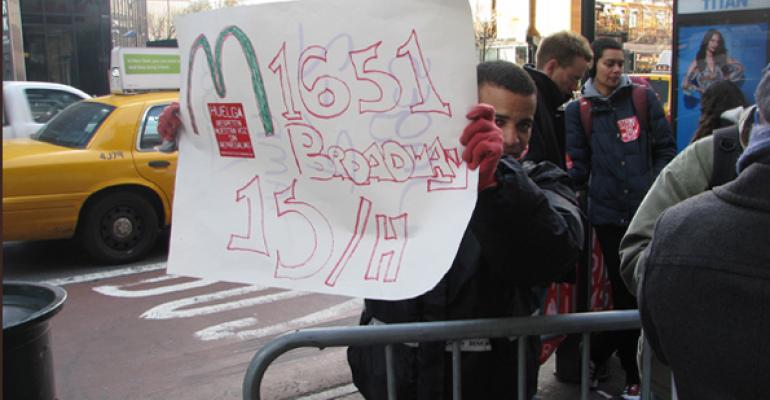 Higher wages of $15 an hour was one demand of the protestors.
News

Employees protested at Burger King, Wendy’s, Domino’s, KFC, McDonald’s and other restaurants around the city

Workers at dozens of quick-service restaurants around New York City walked off the job Thursday, calling for higher wages and the ability to unionize.

Organizers of the one-day strike — called “Fast Food Forward,” and which supporters say marks the largest drive to date to unionize fast-food workers — estimated that hundreds of quick-service employees had joined the protest, setting up pickets in front of Burger King, Wendy’s, Domino’s, KFC, McDonald’s and other chain outlets around the city.

Dozens of picketers gathered outside a Burger King outlet on 34th Street near Eighth Avenue at noon blowing whistles, holding placards and chanting such slogans as “Can’t survive on $7.25,” “We make Big Macs, have our backs,” and “Supersize our wages.”

Jonathan Westin, organizing director of New York Communities for Change, one of the chief organizers of the coalition sponsoring the strike, said protesters were demanding $15 an hour in wages and the right to unionize at their respective restaurants “without fear of retaliation.”

Saying that the quick-service industry employs thousands of workers in New York and pays them “poverty-level wages,” Westin said many employees can’t even afford to buy the basic necessities, including their own food. “People just can’t find good paying jobs,” he said.

Camille Ribera, an organizer with UnitedNY.org, a local coalition of community and labor organizations, said the workers also were seeking more respect from their employers. She said picketers were forming throughout the day at about 30 different sites around New York.

The event, which has been in the planning stages since early this year, began at 6:30 a.m. at a McDonald’s at 280 Madison Avenue and migrated around the city throughout the day. The strike was scheduled to end at the McDonald’s in Times Square at 5 p.m. 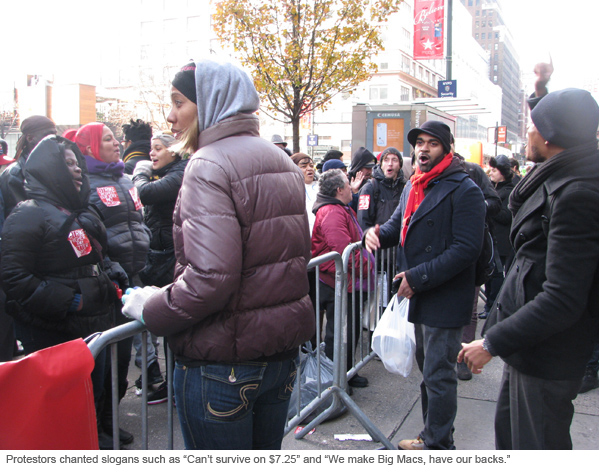 The coalition also includes the Black Institute and the Service Employees International Union.

McDonald’s commented on the strike in a statement, saying, “McDonald's values our employees and has consistently remained committed to them, so in turn they can provide quality service to our customers. We have an open dialogue with our employees and always encourage them to express any concerns or provide feedback, so we can continue to be an even better employer. 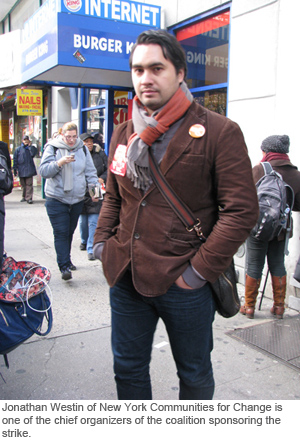 “The majority of McDonald’s restaurants are owned and operated by independent business men and women who offer pay and benefits competitive within the quick-service restaurant industry,” the company added.

Burger King released a statement that echoed McDonald's sentiment. "Burger King Corp. and its franchisees who independently own and operate 95 percent of Burger King restaurants support and invest in the thousands of restaurant team members across the system," the company said. "Burger King restaurants offer compensation and benefits that are consistent with the QSR industry. In addition, through the Burger King McLamoresm Foundation, all Burger King employees and their families are eligible for college scholarships to encourage further growth and education."

New York City Council speaker Christine Quinn said in a statement: “I support New York’s fast-food workers’ demand for decent wages they can live on to support families, pay bills and put food on the table. Fast-food companies are some of the wealthiest in America, yet many of their employees earn far below the federal poverty level. These business practices are unacceptable. All working New Yorkers deserve a living wage and the opportunity to join the middle class. I am behind the city’s fast-food workers who are standing up for this right and fighting for fair pay and an economy that works for everyone.”

New York City public advocate Bill de Blasio echoed Quinn’s statement, saying, “This is the moment for New York City to turn the corner after a decade of rising income inequality. We need nothing less than a citywide movement to uplift New Yorkers struggling to make their way into the middle class.”

Others, however, commended the New York restaurant community for creating jobs that enabled employees to progress up the foodservice career ladder — even during difficult economic times.

“The New York City restaurant industry is to be commended for providing jobs through a sluggish economy, and for continuing to serve customers through disastrous conditions like Superstorm Sandy,” said Scott DeFife, the National Restaurant Association’s executive vice president, policy and government affairs. “The industry, including quick-service restaurants, is one of the best paths to achieving the American dream and has provided opportunities for millions of Americans, as nearly half of all adults have worked in the industry, and more than one out of three adults got their first job experience in a restaurant.”

Nor were all onlookers particularly sympathetic. One pedestrian stopped for a moment to stare at the picketers, and then declared to no one in particular as she moved away, “At least they have a job to walk off of.”