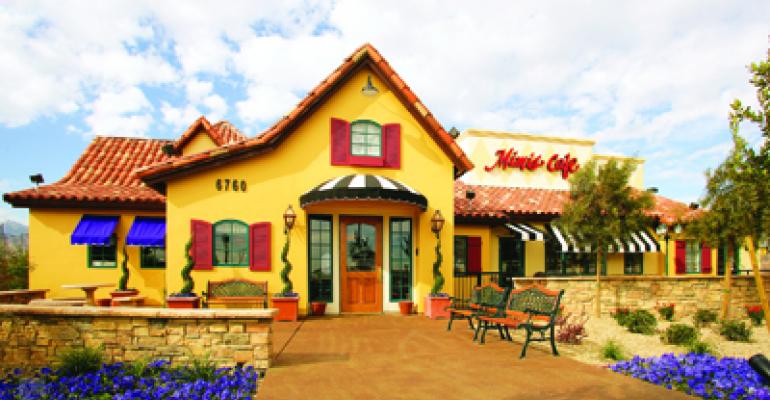 Mimi’s Café is extending its “Value Revolution” positioning with the debut of Mimi’s My Way 1-2-3.

Two-course meal options include garden or Caesar salad or a cup of soup: café corn chowder, French onion, roasted tomato and basil bisque, or one of seven soups that change daily.

“Our guests know and love us for a variety of dinner favorites,” said Mark Mears, president and chief concept officer of 145-unit Mimi’s Café. “We also know times are tight and that dining out at dinner has become more challenging in this economy. While other restaurants lure guests with meal deals that offer only limited selections of appetizers, entrees and dessert combinations, Mimi’s My Way 1-2-3 offers ultimate guest flexibility.”

Mimi’s My Way is just one value offering the chain has deployed to compete with other casual-dining discounts, like Chili’s and Applebee’s $20-for-two offers.

Earlier this year, Mimi’s rolled out Family Meals to Go, a menu of 10 meals for $25 that serve four to five people and intended to drive the chain’s carryout business. Mimi’s Café Express Lunch offers a soup and salad for $6.99, or a half sandwich and soup or salad for $8.49, delivered within 15 minutes.

Other value offers include $8 wine flights during happy hour and Seasonal Tour de France options, like a two-course lunch for $10.99 and a three-course dinner for $13.99.