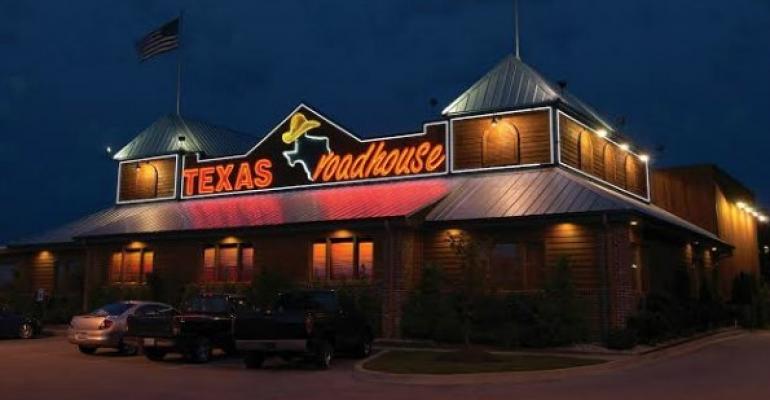 <p>Texas Roadhouse&rsquo;s Anchorage location will be slightly larger than most of the brand&rsquo;s units.</p>
News

Anchorage, Alaska, is taking on the image of restaurant boomtown as “Lower 48” brands push into the 49th state.

Three major brands — Texas Roadhouse, Hard Rock Café and Krispy Kreme — are opening their first units in Alaska this year, debuting new stores in Anchorage, the state’s largest city. They follow on the heels of brands such as Buffalo Wild Wings, Chili’s Too, Dairy Queen, Pita Pit and Olive Garden.

With a population of more than 292,000 and 2012 per capital personal income of $54,570, Anchorage has drawn the attention of more restaurant chains.

“I think some of the folks that have blazed the trail, especially casual diners, have met some success,” said Travis Doster, director of public relations for Louisville, Ky.-based Texas Roadhouse Inc. “I think the market is underserved. Everybody who has been there to visit the site and visit the town says there’s just a buzz there, an excitement that they haven’t seen in a long time.”

Doster said that the 410-unit casual-dining concept is scheduled to open its first Alaska store on May 5 in Anchorage and plans to debut a second on Sept. 29.

“With all the restaurants coming in, folks are saying it feels like a boomtown,” Doster added. “You don’t hear that much anymore. It’s the last frontier maybe.”

Winston-Salem, N.C.-based Krispy Kreme signed a franchise agreement with North to Alaska LLC to develop four units in Anchorage and the Matanuska Valley over the next three years, with the first opening this year. Krispy Kreme has more than 240 shops in the United States, of which about 150 are franchised, and 540 units in 22 nations outside the United States.

Orlando, Fla.-based Hard Rock Café International said it would open a company-owned, 13,600-square-foot, 275-seat restaurant in the city. A spokeswoman said Thursday that Hard Rock Anchorage, which will showcase the brand’s new design and a 52-inch high-resolution interactive “touch wall,” would open later in the spring. Hard Rock has 138 restaurants worldwide.

Alaskan consumers remain eager for Lower 48 brands. Irvine, Calif.-based Taco Bell orchestrated a social-media coup in 2012 by capitalizing on that hunger. After hoax rumors spread that the brand was going to open a store in Bethel, Alaska, with a population of 6,000, Taco Bell helicoptered in an “Operation: Alaska” taco truck and gave away an estimated 10,000 of its Doritos Locos Tacos.

Doster said Texas Roadhouse’s theme, with country music and a steak-oriented menu, would fit well into Alaska. “We felt like we could do well there, and, more importantly, our concept lends itself to that state as well,” he said.

Early casual-dining pioneers in the market have seen mixed success.

Brinker International pulled Chili’s Grill & Bar franchise rights in 2012 after its franchisee, Duke Investments LLC, filed for bankruptcy. The first Alaska franchise had opened in Anchorage in 2002, followed by Fairbanks in 2005 and Wasilla in 2008.

Brinker still has a presence, however. A Chili’s Too, managed separately at Ted Stevens Anchorage International Airport, remains open. That franchised Chili’s Too opened in July 2004.

“Alaska has been a valuable market for our brand for more than a decade,” said Brinker spokeswoman Ashley Johnson. “And while we don’t have any plans at the moment to share, we will continue to evaluate options to bring local guests their Chili’s favorites.”

Doster said the Anchorage Texas Roadhouse, which the company is building, will be slightly larger than most units, covering about 8,500 square feet, which is about 700 square feet larger than a typical restaurant. The larger size accommodates more storage, he said, because supply deliveries are not as frequent in the far reaches of the nation.

Other operational changes include lighting that is a bit brighter than in Lower 48 units, which offsets the longer periods of darkness in the northern clime’s winter months, he said. In addition, Texas Roadhouse anticipates table turns to be longer than a typical unit, as Alaska diners tend to linger longer. “I guess you could call it the ‘cabin fever effect,’” Doster said.

The menu offerings will be Texas Roadhouse’s usual steaks with perhaps a few regional items, Doster said, and pricing may be slightly higher.

“It’s much like operating in California,” Doster said. “You adjust it a little bit, but we maintain our value pricing for sure.”