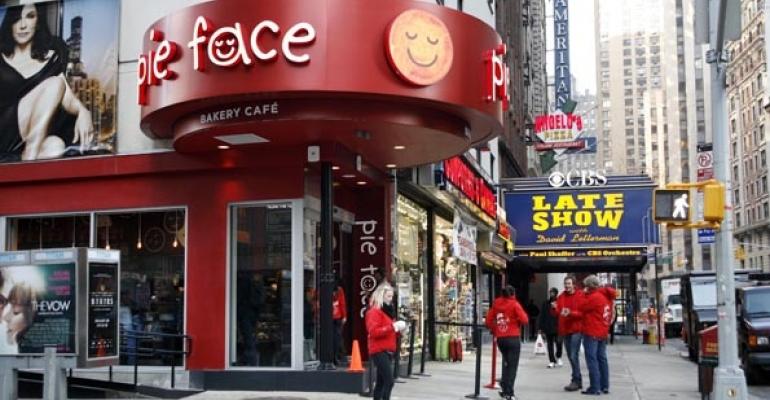 Landmark Hospitality to open at least 100 restaurants in five countries

Pie Face, an 81-unit bakery-café chain based in Sydney, Australia, has signed a licensing agreement with Foodmark, a division of Dubai-based Landmark Hospitality, making the Middle Eastern company the master franchisor of the restaurant concept in the Persian Gulf countries of the United Arab Emirates, Qatar, Bahrain, Kuwait and Saudi Arabia.

The deal, signed on Oct. 3 and brokered by Kuwait-based Univest Consultancy Group, includes a commitment to open at least 100 restaurants in the five countries over the next seven years, starting in the UAE city of Dubai, Pie face chief executive Wayne Homschek said.

“We’re very excited,” said Homschek, who co-founded the chain that specializes in savory pies in Sydney in 2003. He opened the first non-Australian unit in New York City early last year. Since then, he has garnered a $15 million investment from Las Vegas hotel developer Steve Wynn, chairman and chief executive of Wynn Resorts Ltd., who bought 43 percent of the issued and outstanding shares of Pie Face USA’s common stock in a private placement.

Pie Face USA now operates seven locations in New York City, with the eighth slated to open later this month, supplied by a commissary the company built in Brooklyn, N.Y.

Pie Face also recently entered the New Zealand market with master franchisors Julian Field and Jared Palmer, who opened their first store in Auckland on Sept. 1, 2013, with plans to open 62 Pie Face restaurants over the next 10 years.

Under both the New Zealand and Gulf area agreements, the franchisors will build regional commissaries to supply the stores. However, Homschek said the New Zealand licensees plan to sub-franchise restaurants across that country, while Foodmark will develop and run the Gulf region restaurants themselves.

In Australia, parent company Pie Face Pty. Ltd. operates 15 restaurants and franchises another 60, whose operators purchase the pies from commissaries owned and operated by the parent company.

“Landmark are one of the leading retailers in the Middle East, if not the biggest,” said Homschek, noting that Foodmark is the smallest of its four divisions.

Running that division is Kieran Mallon, who previously worked for Alshaya, which brought Starbucks, the Cheesecake Factory, P.F. Chang’s, Pinkberry, Pot Belly, IHOP, Shake Shack and other foodservice brands to the Gulf region.

“Upon meeting, Landmark Hospitality got a perspective on the Pie Face brand, the quality of the products and the dynamism of the Pie Face team, which eventually led to the partnership,” Mallon said in an e-mail.

Khaled El-Marsafy, the New York-based vice chairman of Univest, said Foodmark, which also operates Max Chicken, Carluccio’s, Mango Tree, Chi’Zen franchises in the Gulf, as well as its own Zafran Indian casual dining restaurant, has committed to making Pie Face its growth vehicle. “That’s what they want to penetrate the market with and what they want to be known as,” he said.

He added that he thought the chain would appeal to Millennials in the Gulf, who would appreciate the chain’s grab-and-go model.

El-Marsafy said he thought savory pies had an appeal in the region, too. “We’re a bread society. … Stuffed pastry is part of our culture,” he said, adding that he believed Pie Face could do for the bakery-café segment in the Gulf what Starbucks did for coffee and tea shops and what Pinkberry did for ice cream shops: elevate them to an “international brand” that would make them attractive to families.

“The Pie Face range of sweet and savory pies will be very popular in the Middle East, which has a history of enjoying local baked goods,” Mallon agreed.

El-Marsafy also said that Pie Face’s high-quality coffee would also appeal to customers, but while there is a lot of competition in the coffee segment, he thought Pie Face could distinguish itself with food and then also benefit through incremental coffee sales.

Homschek said he has also signed a memorandum of understanding with an Indonesian group to open Pie Face restaurants in that country. He said he also has an “active dialogue” with a Japanese company and has had initial discussions with companies in China.

He added that he has had a representative in India for the past six months who has narrowed down the number of potential franchisees. “Shortly we’ll probably have some one-on-one negotiations [in India],” he said.