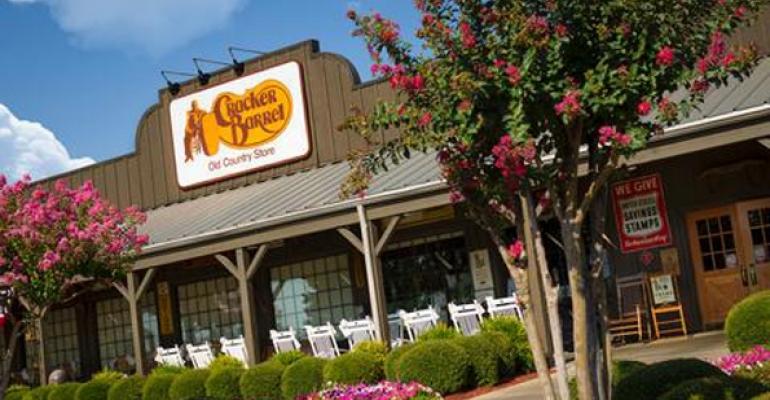 The company says the restaurant industry is facing pressures that include rising gas prices, tax increases and an uncertain job market for consumer.

Cracker Barrel Old Country Store Inc. reported a same-store sales increase of 3.3 percent at its restaurants during the second quarter, a jump the company attributes in part to marketing and menu initiatives.

“We're pleased with our second quarter results and our performance during the first half of our fiscal year,’ said Cracker Barrel President and Chief Executive Sandra B. Cochran. “As we look to the second half of the year, our industry is facing several pressures.”

Those pressures include rising gas prices, tax increases and an uncertain job market for consumers. In response, she noted, Cracker Barrel will continue to heavily market value.

In an effort to push Cracker Barrel’s value proposition during the second quarter, the company revamped 200 of its 1,600 billboards — a major advertising method for the company — to highlight its 14 Country Dinner Plates and their $7.69 price point.

“We currently have 20 percent of our billboards dedicated to sharp price-point messaging,” she said. “And this messaging further reinforces the affordability of our menu.”

The company will also market better-for-you menu options and has been developing a permanent menu category called Wholesome Fixin’s, Cochransaid, which contains menu items with fewer than 500 calories at breakfast and fewer than 600 calories at lunch and dinner.

“Given this history, we assume that you remain intent on seeking a Board seat for yourself personally, despite the clear preference of our shareholders to the contrary,” said James W. Bradford, Jr. Cracker Barrel’s Chairman of the Board, in a Feb. 13 letter to Biglari. “As an alternative to another proxy contest, we believe the buyback transaction we propose here would serve the best interests of the Company and our shareholders.”

“Management is making significant strides in making its cost structure more efficient, particularly as the company implements IT-based labor and planning tools,” he said in an email. “Although some of the post-earnings enthusiasm likely will be tempered…we still think there could be upside to today’s increased full-year FY13 EPS guidance, particularly as many publicly-traded restaurant companies recently have moderated their outlook for food costs in the next 12 months.”

The company expects adjusted earnings per share for 2013 to be between $4.60 and $4.80, and projects total revenue to be between $2.6 billion and $2.65 billion, said Cracker Barrel chief financial officer and senior vice president Lawrence E. Hyatt.  Same-store sales, he added, should increase between 2-3 percent for the year for both Cracker Barrel restaurants and retail.

Commodity costs — especially in beef, pork, poultry, fruits and vegetables — are predicted to increase between 4-5 percent during the full year 2013, Hyatt said.

He added that the company plans to open eight new Cracker Barrel units, a reduction of previous guidance of 9 to 11 new locations.