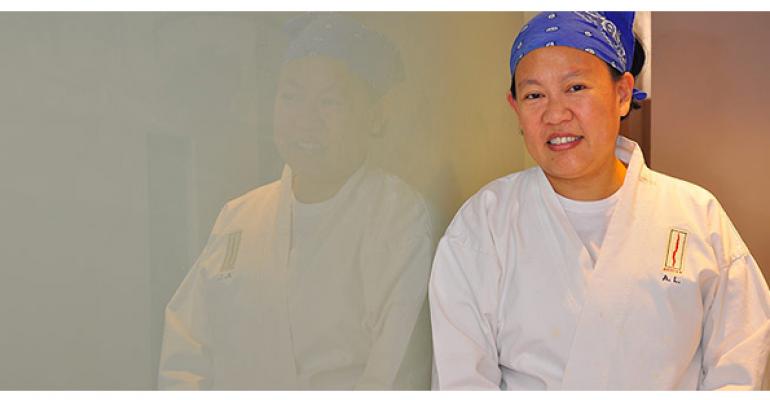 Catching up with Anita Lo at the Food & Wine Classic

Anita Lo is the chef and owner of the highly acclaimed restaurant Annisa in New York City. She has earned numerous accolades for her inventive contemporary American cuisine that reflects her Chinese-American upbringing and classic French training.

She opened Annisa in 2000, and it was an instant hit, earning a two-star review from the The New York Times. The following year, 2001, Lo was named one of Food & Wine’s Best New Chefs. In 2009, she appeared on the first season of "Top Chef Masters" and finished an impressive fourth out of 24 chefs. Last October, Lo released her long-awaited first cookbook, "Cooking Without Borders."

Here, Lo speaks about how the events in her life have influenced her career.

The past few years have been somewhat tumultuous for you. We had a ringside seat as you defeated most of the competition in "Top Chef Masters." But then, just weeks before the show aired, your restaurant was devastated by a fire. How did you handle all that?

Not well. A lot of other stuff happened. A casual barbecue place I opened closed and my mother died. On top of all that, my insurance didn’t come through nearly fast enough to fix Annisa, and I almost gave up hope. But in the eleventh hour it all came together, and the restaurant and I are back on track.

Did the fire change your attitude or approach about the new Annisa?

Not a lot. It was a chance to update the inside, but if anything, we made the menu a bit more fancy because that’s what I like.

Does your Chinese-American background have an influence on the food you serve at Annisa, or are you more influenced by your travels? And how important is it for a chef to travel?

It’s very important, and there are influences on my menu from my travels. I’m Chinese-American but you’ll find more Japanese influences. I’m French trained so that’s my biggest influence. But besides all that, my menu is contemporary American because I’m kind of waspy. (She laughs.)

You waited quite a long time to release your first cookbook. Why so long and why now?

I didn’t think I would, especially since my restaurant burned down shortly before the show aired. But I’m constantly being stopped by customers who mention the show. It’s amazing.