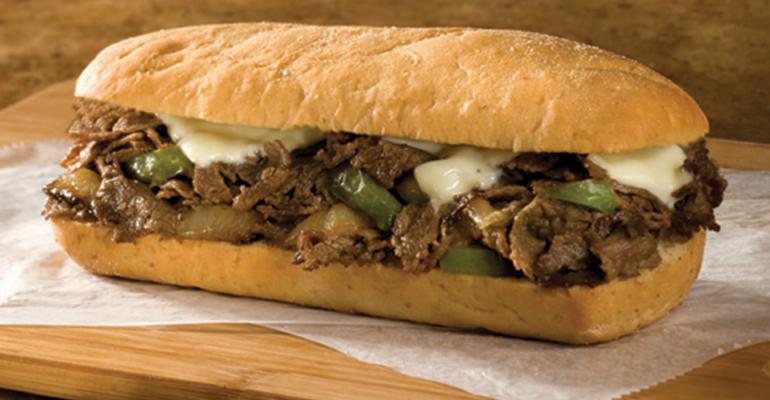 The sizzle of steak

The debate over what type of cheese should top an authentic Philly cheesesteak sandwich will likely rage on forever, but the bottom line is not in question: Sliced steak can add versatility and cachet to just about any restaurant menu.

Increasingly, operators are learning that beef sliced or shaved Philly-cheesesteak style can be used as the main protein in a variety of hot sandwiches. At the same time, it also can appear as a secondary ingredient atop a burger or in a salad that offers the contrasting textures of cool, fresh vegetables and hot, tender beef.

“Top fast casual and casual dining chains are key growth channels for shreds, cubes, strips and shaved beef as premium components in traditional and ethnic offerings such as noodle bowls, sandwiches and salads,” says Dave Zino, executive chef of the National Cattlemen’s Beef Association, a contractor to the Beef Checkoff.

Such use of beef as an ingredient has been increasing of late, he says.

Steak is a proven traffic driver, he adds, citing research from NPD Crest showing that customers’ intent to return to a restaurant is 4 to 6 percent higher among those who order steak.

Ribeye, which Zino describes as the most flavorful of all the subprimal beef cuts — the intermediate cuts between the larger primal cuts and the smaller portion cuts — offers both cachet and versatility, he says.

“While traditionally thought of as steaks and prime rib, the  ribeye can be cut into various ‘right-sized’ steak and roast portions that you can menu across all day parts, from on-trend sandwiches to  profit building small plates with big global flavors,” says Zino.

Research from AdvancePierre® Foods, parent of the Steak-EZE® Philly steak line of products, shows that among  quick service operators that use Philly steak meat, about a quarter — 26 percent — use ribeye, second only to sirloin at 36 percent.

The survey found that the factors operators consider most important when it comes to selecting Philly steak meat are how the product looks when it is cooked and the flavor. They also want a product that can be prepared quickly, offers good value and contains high quality beef.

While the AdvancePierre survey found that Philly steak is used primarily for making Philly cheesesteak sandwiches, operators also feature it in other styles of sandwiches, in salads and on pizza, among other uses.

Sliced steak appears on the menus of high-end restaurants as well. At Boeufhaus, one of Chicago’s newest and most acclaimed restaurants, steak sandwiches from around the country figure prominently on the lunch menu. They include Boeuf on Weck, a take on the Buffalo, New York-area favorite that is served on a caraway seed bun with sea salt and au jus, and a Philly-style cheesesteak made with shaved ribeye, white American cheese and charred onions.

Celebrity chef  Bobby Flay’s take on the Philly cheesesteak, as demonstrated on his “Throwdown with Bobby Flay” show on the Food Network, is made with thinly sliced strip loin, topped with a provolone cheese sauce, sautéed mushrooms and peppers and caramelized onions, served on a soft hoagie roll.

Philly-style beef can also be incorporated into a variety of ethnic and regional offerings, making it adaptable to suit a broad range of menus.

You can find the recipe here:

For an Asian twist that also appeals to the  health-minded,  the NCBA suggests a Stir-Fried Steak and Napa Cabbage Salad, made with chilled rice noodles, Napa cabbage, bean sprouts, sweet peppers, cilantro and fresh mint tossed in a  sweet and tangy Vietnamese dressing and topped with warm pan-seared steak.

“Sliced beef sandwiches provide both operators and consumers with two key benefits,” says Maeve Webster, president of consulting firm Menu Matters. “First, they are among the ultimate comfort foods, particularly in cold weather months. These are filling, warming and were often part of people's childhood, so there's a solid amount of nostalgia — particularly in a season that's driven largely by nostalgia.

“Second, sliced beef can act as a fairly basic base for many different toppings and flavors. Yes, beef has a strong flavor, but it can still be paired with many different domestic [think regionally specific flavors] or international flavors, carriers, toppings, cheeses, sauces, etc.”

The options with sliced steak are plentiful, says Webster, “offering both operators and consumers a lot of potential customizations and new experiences.”