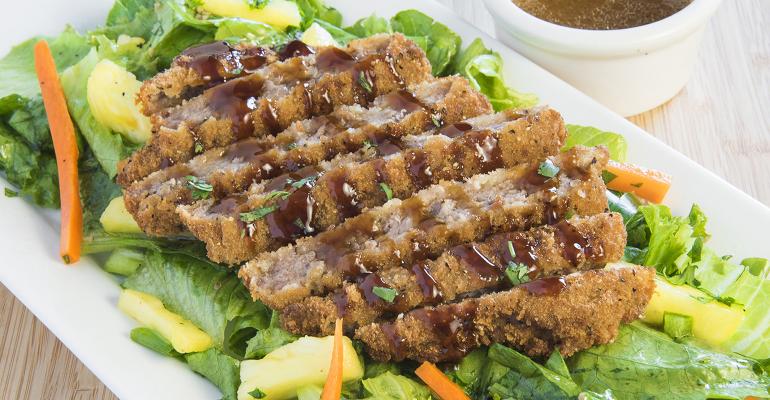 Served on a bed of vegetables, grains or greens, breaded meats can enhance the appeal of operators’ menus and bring efficiencies to the kitchen as well. These offerings are appearing on the menus of operators in every segment, from quick-service eateries to casual-dining chains to fine-dining restaurants.

Customers are increasingly mixing-and-matching items from various parts of the menu, and rejecting the traditional concept of ordering appetizer, salad, soup, main course and dessert, he says. They are combining several courses, such as an appetizer and salad, and are often upgrading a salad to a main course by adding a protein.

“Chefs have realized that they can innovate salad options by incorporating unique ethnic flavor profiles and by combining those flavors with crispy, crunchy meat protein preparations,” says Miller.

These include such variations as Bavarian schnitzel, South American milanesa, Italian milanese or modiga style, Japanese katsu or tempura, or American-style buttermilk fried. Most proteins can be adapted to serve in any of those preparations, says Miller.

“Furthermore, guests are eager and excited to have these salad options,” he says.

Breaded salads can also offer the added benefit of improving cost margins by allowing operators to reduce the amount of protein served on a main course salad while charging a higher price, Miller explains.

Fresh to Order allows customers to mix-and-match from a variety of grilled and breaded proteins to have with their salads. Among the offerings are tuna rolled in panko, sesame seeds, hand-crushed almonds, rosemary and other seasonings. The same breading is also used with chicken skewers that are served with other salads.

The chain also uses a fresh ale batter in which it hand dips chicken tenders to order for placement on salads, and features breaded calamari, cut in-house and breaded to order, that is tossed in an apricot ginger dressing for salads.

All of those proteins can also be used for paninis, wraps, small plates or entrée plates.

Operators who use breaded meat products for sandwiches or other dishes can often easily convert these items into salads, which can bolster both the nutritional value of the dish and the satisfaction of diners seeking to limit their carbohydrate consumption.

AdvancePierre® Foods, a supplier of breaded meat products to the foodservice industry, offers a variety of suggestions for its products, many of which can be transformed readily into entrée salads.

AdvancePierre® Foods also suggests some Asian-influenced rice and noodle dishes that can easily be made into salads, including a Honey and Sesame Steak, made with The Legend Country Fried Steak, bean sprouts, chopped green onions, toasted sesame seeds and Thai chili pepper. It also recommends a Korean Bibimbap, which can be prepared with any breaded protein and blend of fresh and pickled vegetables on a bed of grains or rice.

But whatever culinary direction a restaurant chooses to take, breaded meats are sure to enhance a menu's appeal by adding desirable textures, on-trend ingredients and flavors, and the ability to customize.