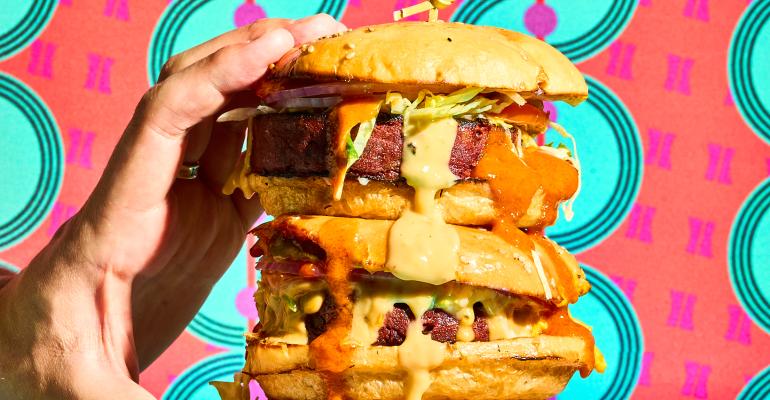 Daniel Schwartz
Lekka Burger is starting to pick up momentum with the opening of the concept’s second location inside the Urbanspace food hall in Midtown East.
News>Independent Restaurants

While Lekka Burger — the plant-based burger concept helmed by South African humanitarian Andrea Kerzner and Amanda Cohen, executive chef of Michelin-starred Dirt Candy — opened its first location in New York City in 2019, the hype for the chef-driven vegan burger joint was drowned out by the pandemic hitting the city just four months later.

Now, Lekka Burger is starting to pick up momentum with the opening of the concept’s second location inside the Urbanspace food hall in Midtown East. Although the vegan burger space is starting to become crowded with new, buzzworthy concepts, Kerzner started out with the simple goal of standing out from the crowd with a chef-created burger that was not made with Impossible or Beyond patties.

“My idea was to create the vegan version of Shake Shack,” Kerzner said. “I wanted to create [a product] that people came to trust, and that they knew they were getting something higher quality […] As somebody who really celebrates vegetables and is really concerned about my health, I feel ill afterward [when I eat an Impossible or Beyond burger]. I knew I didn’t want to do that.”

When searching for the perfect culinary fit for her burgeoning burger concept, Kerzner said she got in touch with Amanda Cohen, who fit the Lekka Burger vision of a vegetable-obsessed culinarian, and chef Cohen accepted the partnership within 24 hours. Amanda Cohen ended up creating a burger that was based on a 2,000-year-old recipe from the Song dynasty in Eastern China. The burger is made with 13 ingredients that “you can find in your kitchen cabinets,” Cohen said, including beans, mushrooms, onions, and garlic.

Related: Will Kevin Hart own the first national plant-based franchise?

“I had never really wanted to get into the veggie burger game because I didn't have that chef burger recipe that I thought was that was better than anything else that was out there,” Cohen said. “Then I came across this recipe […] it’s not made in a lab, and we throw it on the grill for that really juicy, flame-grilled flavor. I think it’s the most unique veggie burger out there.”

Cohen said that her burger is incomplete without the unique bun, for which she purposefully shied away from the textural and taste perceptions of what a “healthy” vegan burger bun should be like with seeds and whole grains. Instead, she went the opposite direction with a very soft milk bun, inspired by the popular Japanese bread, which is very “melt in your mouth soft.”

“The vegetarian burger often comes with a salad and the whole wheat bun and you’re like ‘why? I want fries and a nice bun like everybody else,’” Cohen said.

Lekka Burger’s unique spin on the popular plant-based burger doesn’t just stop at the burger recipe and bun choice though. The menu itself is South African and Indian-inspired with ingredients and flavors like Peri Peri sauce, curry tamarind ketchup and papadum—a North Indian flatbread often made with lentils and chickpeas. The flavor profiles elevate it beyond the 'typical' American burger flavors.

“I want us to appeal to multiple demographics,” Kerzner said. “I wanted to have a very inclusive and diverse menu. We have South African burgers, Mexican burgers, and original American-style burgers as well. […] If you come in to our downtown restaurant, our guests range from young mothers and yoga enthusiasts to policemen and construction workers.”

Launching Lekka Burger right before the pandemic did force Kerzner to change course with her expansion strategy of Lekka Burger. Becoming the Shake Shack of veggie burgers is now more of a mindset than an expansion goal. As the restaurant industry has fundamentally changed, Lekka Burger will likely expand more through food halls and food courts than standalone restaurants as a more affordable option of taking over the plant-based burger scene in New York City and beyond, with goals of eventually opening in markets like Miami, Chicago and Los Angeles.

“Have we hit peak veggie burger place yet?” Cohen asked. “I certainly hope we can sustain them all because it's been pretty amazing. 10 years ago, if you would have told me that there'd be 20 Different restaurants that were dedicated only to vegan burgers in New York City, I would have thought you were insane. At the moment, we’ve been able to sustain this momentum and it’s great. The more the merrier!”