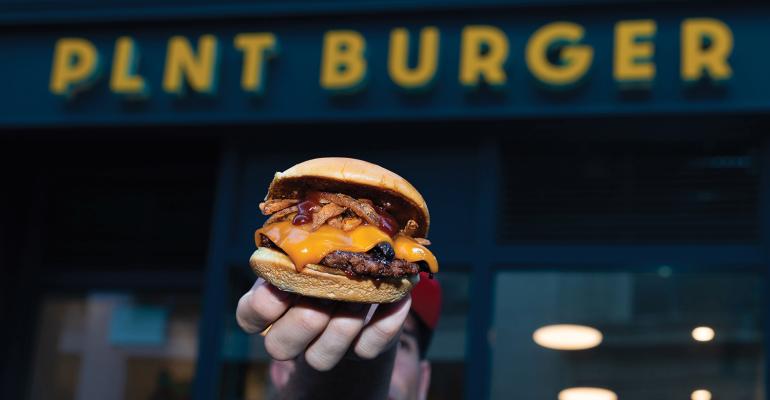 PLNT Burger grew from Mendelsohn’s own tendency toward plant-based eating.
Create the Future of Foodservice

At PLNT Burger, it’s all-American classics — with a plant-based twist

That’s how Mendelsohn came up with the idea of PLNT Burger (pronounced plant burger), which opened its first location in a Whole Foods Market in 2020.

Set in a “fast-food environment,” PLNT Burger got its start inside of Whole Foods Markets across the east coast and opened its first brick-and-mortar location in 2021 in New York City.

That was the first expansion into the Big Apple for PLNT Burger, which also opened a two-story location in New York this year.

Its quick expansion was possible because, as part of a supermarket, PLNT Burger was deemed an essential business in the worst of the pandemic, which allowed it not only to stay open while other businesses were shuttered, but to also add more locations inside of Whole Foods Markets before moving to standalone brick-and-mortar.

There are 12 PLNT Burger locations open today — 10 in Whole Foods locations in the Boston, Philadelphia and Washington, D.C., metro areas, and the two brick-and-mortar locations in New York City. The chain plans to open more locations across New York as well as Boston this year.

“You weren’t always able to do this with plant-based foods,” Mendelsohn said. “Plant-based foods used to get a bad rap. The flavors were off; the textures were rubbery [and] leathery. And the innovation in this space over the last five years has been amazing. It allows chefs like myself who like to be creative and challenged and inspired to come up with a concept like this.”

The goal of PLNT Burger isn’t just to serve innovative food. It’s also to help save the planet.

“We like to look at climate change through the lens of food. Some people have eco-anxiety, and they don’t know how to take charge of their diet or what’s happening in the world, and this is one way to do it — a delicious way,” he said.

Mendelsohn thought of the idea for PLNT Burger after a chance meeting with Honest Tea founder Seth Goldman at a conference where Goldman had heard about Mendelsohn’s fondness for plant-based eating and slipped him some Beyond Meat. Mendelsohn was hooked on the product from the moment he put the patties on the grill and bugged Goldman to open a concept with him for several years before PLNT Burger was finally ready to launch with the two as cofounders.

The patties at PLNT Burger are Beyond Meat, a nod to the pair’s initial meeting and the passion they both share for the product all these years later.

“This is the culmination of my life’s work,” said Mendelsohn.