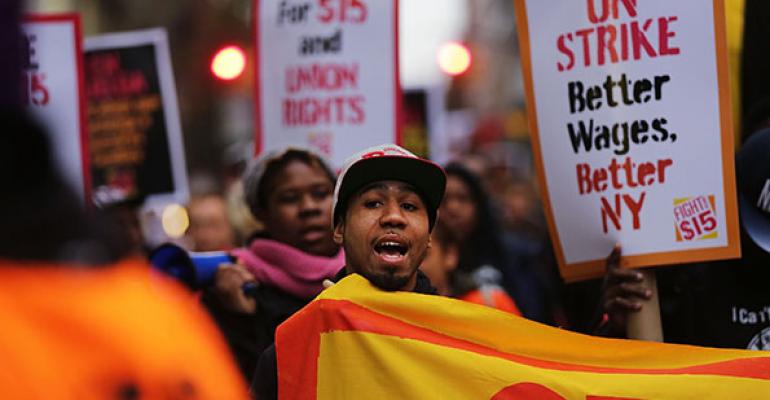 Organizers of the national “Fight for $15” movement advocating for increased minimum wages stepped up efforts with protests in 270 cities, targeting not just restaurants but also city halls and Tuesday's Republican presidential debate in Milwaukee.

Experts were anticipating more protests with the presidential election coming in 2016.

Joe Kefauver, managing partner of Align Public Strategies, a public affairs consultancy, said, “This set of protests has the potential to be more significant than prior events because we are now within a year of the general election and while the protests will likely be nationwide, there will be a particular concentration in presidential battleground states.

“Essentially, prior protests have been about driving a narrative around our jobs and our business model,” he said, “whereas this round of protests will have much more of an eye toward electoral outcomes.”

Organizers said the protests included workers from McDonald’s, Wendy’s, Burger King, KFC and other quick-service restaurants as well as home-care, child-care and other lower-wage workers in a push toward a $15 an hour minimum wage. The federal minimum wage has been $7.25 an hour since 2009.

Restaurant companies and industry and franchise group representatives said the calls for higher minimum wages would not address income inequality and other issues raised by the protestors.

In St. Louis, a McDonald’s manager had locked the door to the dining room instead of opening at the scheduled 6 a.m., the St. Louis Post-Dispatch reported. An employee said the restaurant didn't have the staff to open the dining room. At least 80 protesters stood in front of the restaurant, waving signs, shouting into a bullhorn and chanting, according to the St. Louis Post-Dispatch.

In Miami, dozens of people protested at McDonald's, the local ABC affiliate reported.

In South Los Angeles, restaurant workers and others employed in low-wage industries were joined by union activists at a McDonald’s, Los Angeles Daily News reported. They planned to march on Los Angeles City Hall.

“Income inequality in this country keeps growing,” Gilda Valdez of the Service Employees International Union, SEIU, told Fox11 during a rally. “We have to start closing the gap.”

A protest was also planned outside the Milwaukee Theater in Wisconsin, where the Republican presidential candidates were convening Tuesday night for a televised debate. None of the GOP candidates have supported an increase in the minimum wage. The Democratic National Committee voted in August to add a wage increase to the party’s 2016 platform.

Lisa McComb, director of McDonald’s media relations, issued the company’s statement Tuesday, saying: “At McDonald’s, employees can both earn and learn, which we know is vital to attract and retain talented people.

“In July, wages at our company-owned restaurants in the U.S. increased $1 over the locally mandated minimum wage, which affects more than 90,000 employees,” the company said. “We also expanded our education program to help 750,000 employees who work at both company and franchised McDonald’s restaurants receive high school and college tuition assistance. We provide training, resources, and opportunities to our employees to aid them in their McDonald’s career and beyond.

“Generally speaking, the topic of minimum wage goes well beyond McDonald’s — it affects our country’s entire workforce,” the statement continued. “McDonald’s and our independent franchisees support paying our valued employees fair wages aligned with a competitive marketplace. We believe that any minimum wage increase should be implemented over time so that the impact on owners of small and medium-sized businesses — like the ones who own and operate the majority of our restaurants — is manageable.”

“The franchise business model is a valuable playbook that provides a pathway to personal and professional success and business ownership for aspiring entrepreneurs,” Cresanti said in a statement. “The protests today put the future of these jobs and businesses in jeopardy.”

Cresanti said the nation needs to look at solutions to the growing economic divide, “however, staging street theater and shutting down restaurants owned by local families who have invested their life savings and created jobs in communities cannot be the answer.”

Christin Fernandez, director of media relations and public affairs for the National Restaurant Association, called the protests “SEIU’s recycled attacks on an industry that provides career opportunity and pathways to success for over 14 million Americans.”

Fernandez cited voters’ rejections of minimum wage increases in elections earlier in November in Portland, Maine, and Takoma, Wash. “Americans are taking note that protests and ballot initiatives are not the real solutions to addressing income inequality,” she said.