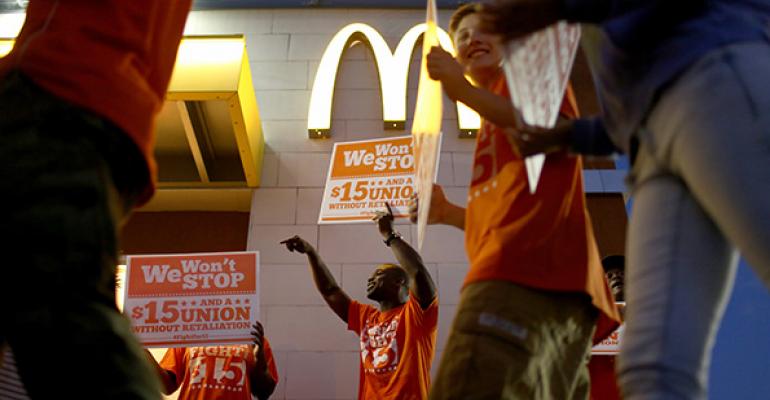 <p>The protests were organized by Fight for $15, a group backed by the Service Employees International Union</p>
News

Quick-service workers and other supporters of an increased minimum wage protested outside McDonald’s locations and other restaurants throughout the country Wednesday as part of a broad effort by labor groups pushing for a $15 hourly wage.

The protests began Tuesday in Boston and continued early Wednesday in New York City and other areas. Strikes were expected to take place in 236 cities across the country, with multiple demonstrations in many cities. The strikes are expected to include tens of thousands of workers.

The protests were organized by Fight for $15, a group backed by the Service Employees International Union that is pushing for a pay increase to $15 an hour for quick-service and other workers, as well as the right for those workers to form unions.

The protests come despite recent efforts by some restaurants and retailers to increase wages. McDonald’s, for instance, recently said it would raise the lowest wages at company locations to $1 an hour above the local minimum wage, starting in July.

That effort did not quell labor protests, which have intensified in the weeks since the announcement. Many of the protests Wednesday were aimed directly at McDonald’s. Demonstrators in some cities dressed up as Ronald McDonald.

Labor activists have noted that McDonald’s efforts don’t apply to franchised locations, only the roughly 12 percent of units that are company owned.

But McDonald’s, which is currently fending off an effort by the National Labor Relations Board to classify it as a “joint employer” of its franchisees’ workers, refused to direct franchisees to increase wages.

The protests drew strong criticism from restaurant and franchise trade groups. The International Franchise Association said the protests are a “multi-million dollar public relations campaign” to mislead policymakers from the “blatant and politically-motivated overreach of the National Labor Relations Board’s attempt to expand its current joint employer standard.”

“Recently disclosed financial reports unequivocally prove these protests are nothing more than union-funded public relations stunts, serving as the backbone of one of the most egregious examples of government overreach in American history,” IFA CEO Steve Caldeira said in a statement.

The National Restaurant Association suggested that the campaign is designed to boost union membership.

“Labor groups are using their national, multi-million dollar campaign as a way to satisfy their own self-interest,” Angelo Amador, senior vice president of labor and workforce policy and regulatory counsel for the National Restaurant Association, said in a statement. “Their calls for unionization are evidence that their concerns lie not on employee advancement but on boosting diminishing union membership and bolstering union dues.

“In fact, we have seen from their past demonstrations that the vast majority of participants are their own union activists and paid demonstrators.”

Rob Green, executive director of the National Council of Chain Restaurants, said in a statement that the market is already working to push wages higher, citing efforts by McDonald’s, Walmart and other large employers to raise wages and benefits. He also said that high-wage mandates lead to other benefit cuts.

“In municipalities that have dictated an excessive minimum wage, some businesses have cut payrolls and eliminated benefits, while others are raising prices and workers are losing their jobs,” Green said. “The job markets in Seattle or Sacramento are different than local conditions in San Antonio and Sandusky.”

Still, the protests come shortly after a study by the University of California, Berkeley, that suggested that low wages paid by some businesses cost taxpayers $153 billion a year in public assistance spending to the working poor.

That public assistance includes Medicaid, Temporary Aid to Needy Families, the Supplemental Nutrition Assistance Program and the earned income tax credit. According to the study, 52 percent of quick-service restaurant workers received some form of public assistance.