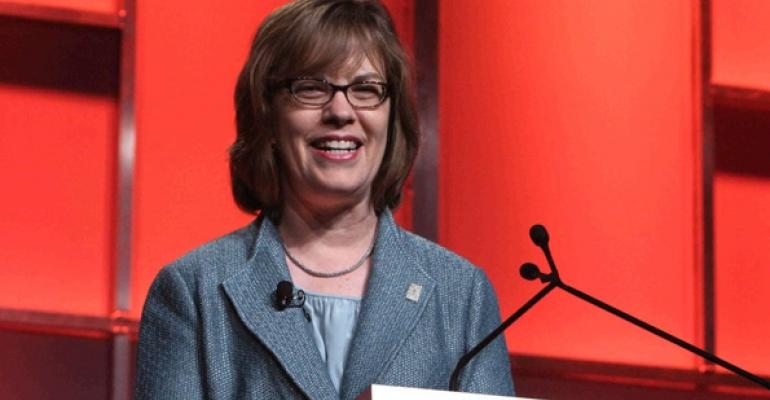 Popeyes Louisiana Kitchen has seen success by inspiring change from the bottom up rather than from the top down, president and chief executive Cheryl Bachelder told attendees of the 54th annual International Franchise Association Convention during a keynote address.

The Popeyes leader noted that the brand’s past five years of systemwide same-store sales growth and profit growth began in 2007 when she and her fellow executives determined who among the brand’s shareholders, guests and franchisees the franchisor should serve.

“We needed to serve the people who have invested the most in Popeye’s,” Bachelder said. “We made that firm decision in the fall of 2007, and we have never changed our mind of who comes first at Popeyes.”

Shortly thereafter, franchisees began giving greater input to Popeyes’ leadership team, leading to sales-driving menu items from a franchisee-led new-product committee, as well as the decision to shift the brand’s media spending toward national advertising to seed awareness in new territories and allow for growth.

Bachelder recounted the story of Popeyes’ “long overdue” remodel in 2008, which she called the “most high-impact” initiative of Popeyes’ turnaround under her leadership — and which the franchisee community did not like at first. When the brand’s partners voiced dissatisfaction with the first prototype, Popeyes’ design team scrapped the program and started over, eventually yielding the “Louisiana Kitchen” model two years later.

The franchisees were far happier with the later prototype, “and when franchisees are happy, they move fast,” Bachelder said.

Popeyes has accelerated growth since the rollout of the prototype in large part due to franchisee enthusiasm, she noted.

Bachelder closed her speech with a quote from comedian Amy Poehler about the value of collaboration: “As you navigate through the rest of your life, be open to collaboration,” she said. “Other people, and other people’s ideas are often better than your own. Find a group of people who challenge and inspire you, spend a lot of time with them, and it will change your life.

“And I would add, your results.”

The IFA hosted its annual gathering this week at the New Orleans Convention Center and drew more than 3,540 attendees, a record for any of its conventions held outside of Las Vegas and close to last year’s all-time high of more than 3,600 attendees.

The association will hold its 2015 convention next Feb. 15-18 at the MGM Grand Hotel in Las Vegas.