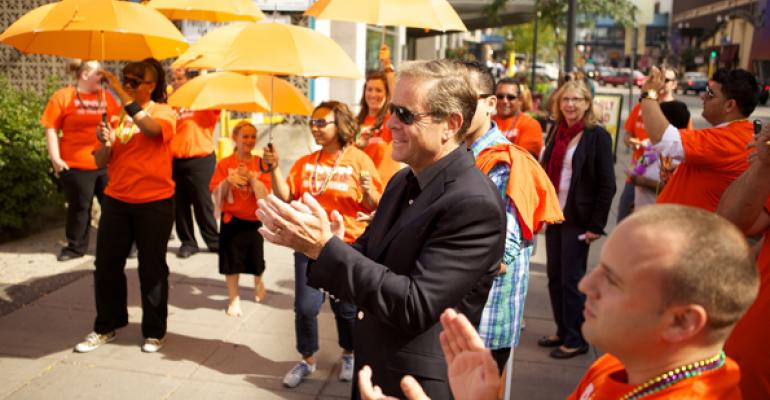 To build awareness of its quickly growing presence in the Twin Cities, the Atlanta-based quick-service brand staged a “flash mob” event in downtown Minneapolis on Sept. 12 that emphasized Popeyes’ signature orange color and New Orleans heritage.

Minneapolis residents had only seen one Popeyes restaurant before this year, when parent company AFC Enterprises Inc. converted nine of the 13 KFC locations it had purchased from a bankrupt franchisee and reopened them as Popeyes Louisiana Kitchen units.


“It’s unusual for a brand to go from one store to 14 virtually overnight … so there really wasn’t a model for how you introduce yourself,” Chief marketing officer Dick Lynch said. “We put our heads together and thought it would make sense to have an event like this flash mob.”

Popeyes brought a New Orleans jazz band to Minneapolis, split the players up and had them start spontaneously playing a marching tune outside the city’s Nicolett Mall downtown. The band members’ ties were Popeyes’ signature orange color.

After the band converged in the middle of the street, it marched down Hennepin Avenue, handing out Mardi Gras masks and leading revelers to a Popeyes food truck that was giving away Handcrafted Tenders. Several banners were unfurled that said, “Popeyes has arrived.”

Lynch said that the event benefited from favorable weather and large crowds from the nearby Nicolett Mall farmers market and a Minnesota Twins game at Target Field.

Currently, nine of the 13 converted units are open in the Twin Cities in addition to the one existing unit. Lynch said that those 10 Popeyes locations are producing average unit volumes well above the system average and that the four remaining converted restaurants would open in that market by the end of the year.

He cited several factors for Popeyes’ initial success in Minneapolis and St. Paul in 2013, including the fact that Popeyes has advertised nationally for nearly five years, which built up a lot of pent-up demand for the brand in the Twin Cities. Once the new restaurants started opening in that market this year, they had been completely renovated and remodeled with the chain’s “Louisiana Kitchen” design.

Long before Popeyes moved to national TV commercials, Lynch added, the brand had built up a large reserve of positive word-of-mouth advertising, giving it the “iconic but unavailable” status that a brand like Coors beer enjoyed in the 1970s.

“Guests had heard about this brand, seen it advertised for years but didn’t have one to go to, and now they walk into these new stores, and they’re beautiful,” Lynch said. “The partner we’re with here is really best-in-class, among the best operators in our system, and we were delighted they were interested in this area.”

Popeyes’ franchisee in the Twin Cities is Parikh Network LLC, which is one of the brand’s largest franchisees and operates Popeyes units in New York, New Jersey, Philadelphia and Baltimore.

Popeyes paid to convert the former KFC locations in the region and retained ownership of the buildings. Parikh Network paid a build-to-suit fee during the rebranding process and now pays rent in addition to its sales royalty to AFC Enterprises.

Lynch said the flash mob event might be used in other cities the next time Popeyes enters a new market, though currently there are no plans to make a multiunit entrance through acquisition like Minneapolis.

Popeyes held another flash mob once before, in August 2010, taking over New York City’s Times Square with a crowd of people wearing the brand’s signature orange. The occasion then was to celebrate Popeyes’ win in a national taste test over KFC.

“That announcement really in many ways was the beginning of the brand’s explosion that’s continuing this day in terms of sales,” Lynch said. “That was the start of the momentum we’re enjoying, and today’s event [in Minneapolis] in many ways was modeled after that.”

Popeyes operates or franchises 2,153 restaurants in the United States and 31 foreign markets.