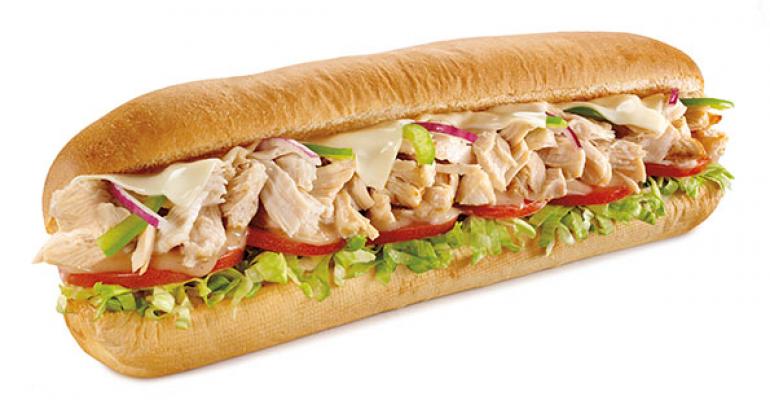 The sandwich chain also moves up rollout of antibiotic-free chicken

Subway is introducing several premium menu items while speeding up its timeline to serve chicken raised without antibiotics.

At a press event introducing new chicken, turkey and bacon, representatives of the Milford, Conn.-based sandwich chain said the new chicken, which will be introduced to its 27,014 domestic restaurants on March 1, would be its first antibiotic-free meat product.

The new rotisserie-style chicken is slow-cooked chicken breast that will be hand-pulled in restaurants and available on any sandwich. It’s available at a suggested price of $4.75 for a 6-inch sub and $7.75 for a Footlong. It will be offered along with the current grilled chicken strips, which will be antibiotic free as of April 1.

The chain is also introducing a more thickly sliced turkey breast and applewood smoked bacon. The turkey will be priced similarly to the rotisserie chicken, and the suggested retail price of the bacon will be 75 cents on a 6-inch sub and $1.50 on a Footlong. Subway will be promoting the two new items starting April 11, with a Carved Turkey & Bacon Sub made with those ingredients on toasted Italian bread, along with American cheese and vegetables, at a suggested price of $5.25 for a 6-inch and $8.75 for a Footlong.

Additionally, the chain announced the introduction of Simply Lemonade and Simply Lays Thick Cut Potato Chips, both of which are made without artificial colors, flavors or preservatives.

In January 2015, Subway relaunched its chicken without artificial flavors or preservatives, along with a more pronounced chicken flavor and visual freshness cues including pieces of fresh parsley.

The chain subsequently made commitments to remove artificial ingredients from its sandwiches, soups and cookies by the end of 2016.

In October, it set a timeline for moving entirely to antibiotic-free meat by 2025.

The chain, with more than 44,000 locations worldwide, also recently relaunched its logo, changing the colors of the lettering from yellow and white to green. A spokesman for the company said the logo first appeared in December in the chain’s “Founded on Fresh” TV spot.