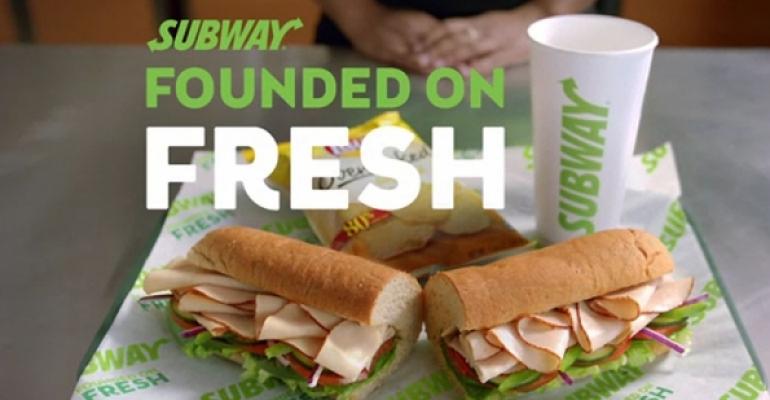 Subway wants to remind customers that it pioneered the freshly made, assembly-line business model that many fast-casual competitors have been getting credit for in recent years.

The quick-service sandwich chain’s latest ads, which first ran during NFL games on Sunday and will air for the next two months, remind customers of the chain’s 50-year history and its pioneering freshness.

“Subway was fresh before it was fresh to be fresh,” the ad states.

“We stopped talking about it,” Chris Carroll, Subway chief advertising officer, told Nation’s Restaurant News. “Panera and Chipotle talked about it and got all the credit. It annoyed us. We wanted to go back and stake the claim of freshness. That’s exactly what this ad is intended to do.”

The ad, the first from Subway’s new creative agency BBDO Worldwide, also serves as a tribute to late Subway co-founder Fred DeLuca, who died earlier this year after a battle with leukemia.

DeLuca’s son Jonathan, who resembles his father, plays Fred in the ads, which show Fred DeLuca and Dr. Peter Buck as they opened “Pete’s Super Submarines” back in 1965. The chain was renamed Subway and eventually grew into the world’s largest restaurant chain by unit count, with 44,000 locations.

“This film is about celebrating Fred DeLuca’s legacy, that Subway has been about ‘Fresh’ since it was founded in 1965,” David Lubars, chief creative officer of BBDO Worldwide, said in a statement.

The ad notes that the idea of freshly made sandwiches was “crazy at a time when artificial foods and gimmicks were all the rage.” People eat TV dinners and a roller-skating drive-in waitress falls and hurls a customer’s tray onto his car in the spot.

The ad represents a shift in Subway’s approach, away from price-based marketing that had dominated its ads during and after the recession.

“It’s a departure from where the brand has been over the last few years, when our position was more of a value position,” Carroll said. “Long term, we came to the realization that was not sustainable. As we went through the brand revitalization process, we identified that our brand was based on fresh, but we lost that position.

“Our brand was fresh from the very beginning. We innovated all along.”

The ad also sets up Subway for where it will be going into the future. In the coming months, commercials will continue to focus on freshness as well as health. Subway also plans to advertise its efforts to make ingredients “cleaner,” such as the elimination of antibiotics in its meat.

“Fresh used to be when we made a sandwich fresh it had fresh vegetables,” Carroll said. “Consumers today are looking for a lot more. We’re converting all our products to antibiotic free, we took all the trans fats out. That’s incredibly important to consumers. It’s all about the definition of fresh.”

The company also believes that Subway’s origin story, in which DeLuca borrowed $1,000 from Buck and started a sandwich shop as a teenager to raise money for college, will resonate with younger consumers. “They really enjoy the back story on this,” Carroll said. “They find it interesting that this brand has some substance to it. We have freshly made sandwiches and fresh ingredients. It’s believable.”

It’s a decision that plays well with employees. “It’s really authentic,” Carroll said. “I don’t know how much that will play with consumers. But it plays really well with our own internal audience.”