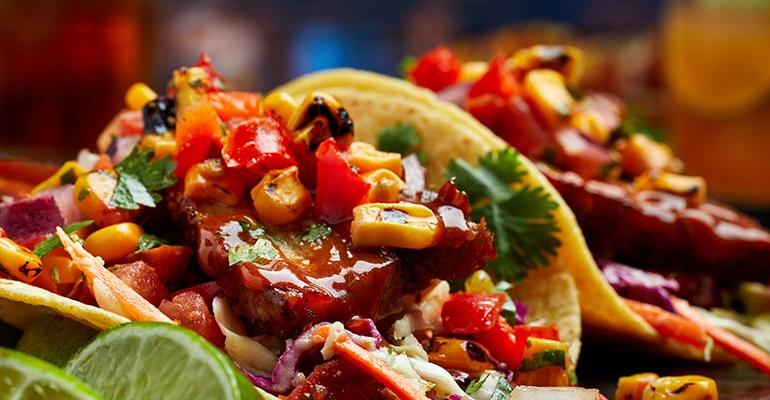 Greg Mecane
Firebirds Wood Fired Grill, a casual-dining chain based in Charlotte, N.C., with 55 units in 20 states, has recently expanded its Firebar menu, which is discounted during Happy Hour but available all day long.
Menu>Food Trends

Restaurants adapt to a grazing nation

The three-course meal and the three-meal day still have their part to play in nourishing Americans, but increasingly consumers are spreading out their eating to suit their evolving needs. A breakfast flatbread with a mimosa at 10 a.m. after the morning Zoom meetings, a 3 p.m. snack of cold cuts and cheese puffs while socializing with friends over beer after a short day working from home, and late-night tacos after a long day working from home to make up for that short one are increasingly replacing breakfast, lunch and dinner.

Related: Cocktails paired with a snack add a new dimension to drinking

At The Original, a diner concept in Denver, more shareables and small plates are on the menu than entrées. “People want experiential stuff,” he said. “It’s easier to watch a game [with small plates and shared items], and they like to pick.”

He said that’s why the deviled egg flights do so well. Comprised of a traditional deviled egg, one with Everything bagel seasoning (granulated garlic and onion, sesame and poppy seeds, and salt), a Buffalo option with blue cheese and one with pimientos, it’s fun and has many different flavors to keep customers’ attention. So do the doughnut sliders — small cheeseburgers with bacon and onion jam sandwiched in miniature doughnuts — and sweet and savory popcorn served in cones. 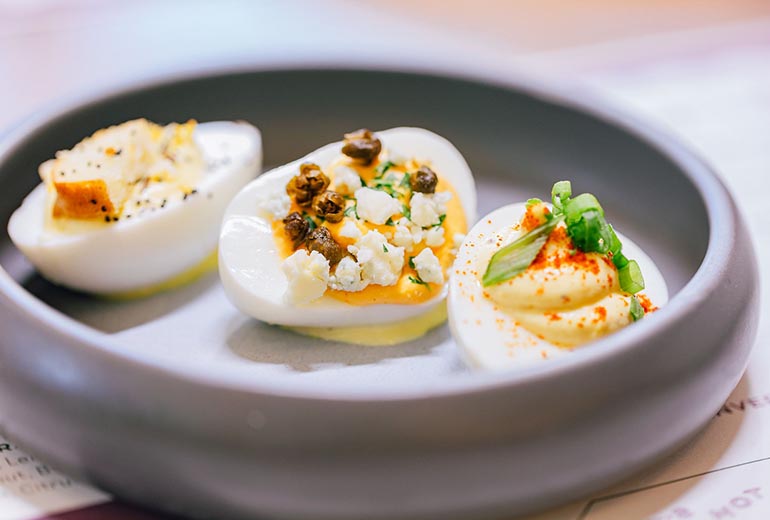 At The Original, a diner concept in Denver, more shareables and small plates are on the menu than entrées.

“Those are the things that people gravitate to,” he said.

Shared buckets of fried chicken are a hit at Noble Riot, a wine bar also in Denver, where owner Troy Bowen also recently expanded his meat-and-cheese board to include multiple iterations, including Mediterranean platters, or just cheese, just meat, just pickled vegetables or the full spread.

“People are much more willing to get a bucket of chicken and a full spread and then just graze for an hour” rather than having a meal coursed out, he said.

“The more we give people the ability to get smaller items, the more they’re actually putting all those together,” he added, which of course means they’re buying more. “We’ve never been a place that you come for dinner, but we’re a place where you’ll eat a lot of food.”

Smaller, multiple meals are not just a growing trend in the U.S. CNN recently cited a survey by snack food company Mondelez International that around 64% of consumers worldwide said they prefer to eat several small meals during the day rather than fewer large ones, up from 59% in 2019.

Restaurant chains have taken notice and responded with items such as the January launch by Frutta Bowls, a 39-unit plant-forward concept owned by parent company WOWorks, of Cran-Cacao Protein Bites, which are balls made with blueberry granola, almond butter, vanilla whey protein, honey, cacao, and dried cranberries.

Jinya Ramen Bar, a Japan-based company with 40 units in the U.S., mostly serves noodle soup, but in June it launched a limited-time offer of Otsumami, a Japanese term for a bar snack, made with pork and chicken chashu, a seasoned egg, sautéed bamboo shoots and spicy bean sprouts.

CAVA, a fast-casual Mediterranean chain based in Washington, D.C., with nearly 250 units nationwide that also sells some of its spreads and other items via retail, in April responded to an Instagram post from YouTube personality Emma Chamberlain about the concept’s food with a limited-time snack in her honor.

“I literally love ur spicy hummus i ate an entire tub in one sitting once,” she said.

So for April CAVA offered Emma’s Spicy Snack, which was simply its spicy hummus with pita chips.

Social media could have an outsized role to play in the spread of nontraditional foods as cute, multicolored plates with lots of things on them are more attractive than a standard plate with an entrée, starch and vegetable.

“I think a lot of it is the way it’s presented,” DeGano of Sage Restaurant Concepts said.

Big, bold presentation is part of the shareable Oktoberfest fare at Clinton Hall, which has six locations in New York City and is currently offering sausages, potato pancakes, cornichons, pork “wings” (small pork shanks cut to resemble wings and glazed in beer gravy) and more all inside a giant pretzel.

“Basically they want something that they can share,” chef Darryl Harmon said. “They want to snack on a few different items — two to three bites — and then share with everyone else at the table,” he said. “They’ll order a bunch of stuff at the table and just snack on it.”

Firebirds Wood Fired Grill, a casual-dining chain based in Charlotte, N.C., with 55 units in 20 states, has recently expanded its Firebar menu, which is discounted during Happy Hour but available all day long.

Senior vice president and executive chef Steve Sturm said the idea is to tap into what he calls “clockless dining.”

He said a growing number of customers are now coming in between 2 p.m. and 6 p.m., “and certainly the younger crowd likes to gather in groups and be able to share an experience, so what we wanted to do was expand the food that we were previously only offering in the bar area.”

Now with 10 items instead of six, new Firebar offerings include meatballs made from the trimmings of the restaurants’ rib eye steaks and served in creamy tomato sauce with wood-grilled focaccia.

“Meatballs are super hot, and this is a way to leverage our really high-quality trimming, because we butcher in-house,” he said.

The avocado toast on the chain’s new brunch menu has also been reworked into a shareable item, served on smaller focaccia pieces and topped with a salad of cucumber, pickled red onions, feta cheese, and cherry tomatoes.

Other new additions include pork belly tacos and a separate item of pork belly in bourbon cherry glaze with grilled corn, charred tomatoes, and goat cheese.

“Sometimes you get single travelers who just want one or two appetizers with their Martini or beer, then you get groups coming out who want to experience different tastes and textures, taking pictures, making people jealous of what they’re experiencing,” he said.

“Ultimately what they’re looking for is bold, great-tasting items.”