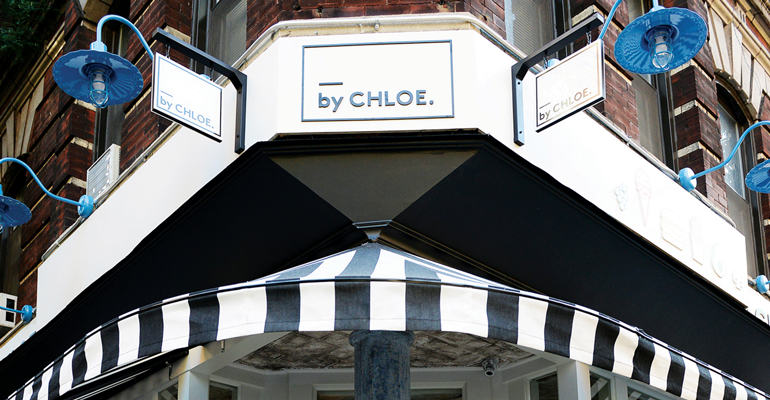 By Chloe aims to be a place they can eat that doesn’t feel like a sacrifice.

The first By Chloe restaurant opened near the Manhattan campus of New York University, in July 2015. The chain now has six locations and a bakery across New York, Boston and Los Angeles, with plans to open near the campus of Brown University, in Providence, R.I., later this year. ESquared, which runs the BLT restaurants and other concepts, was originally a partner in the restaurant with Wasser and Coscarelli. However, in March, the partners split, and will expand By Chloe without Coscarelli. The interior of a By Chloe location

“The Quinoa Taco Salad and Guac Burger are definitely the best-sellers,” said Wasser, who estimates that fewer than 10 percent of the chain’s customers are vegan. Some keep kosher, others are dairy-intolerant, “or they just want to eat a little more healthy,” she said.

Wasser said that ESquared hospitality has the infrastructure to help By Chloe expand.

“We managed to create something that people want to buy into, be it the restaurant design or the brand being more of a lifestyle for people,” she said.

“We would love to expand the brand overseas.” Wasser said. “We get a lot of inquiries all the time from partners in different areas of the world.” She also hopes to expand within By Chloe’s existing markets, as well as cities such as Chicago, San Francisco and Washington, D.C.

“There are a lot of places where we see the brand working,” Wasser said. “Time will tell.”

BY CHLOE: NOT JUST FOR VEGANS