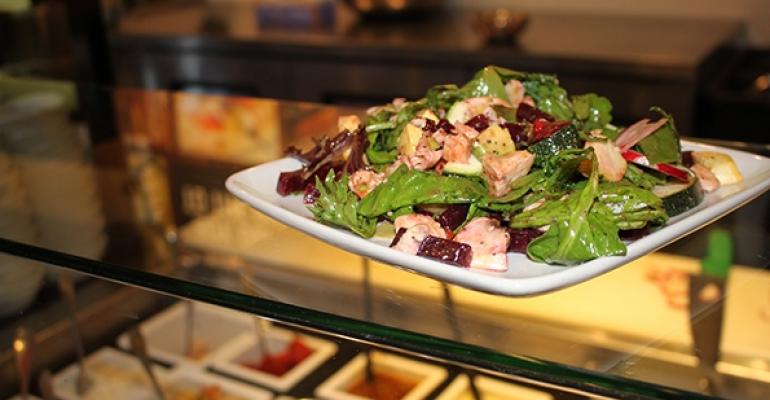 Salad can no longer be an afterthought — not anywhere. Sports bars, steakhouses and quick service burger chains have left behind the iceberg lettuce and bland tomatoes as their guests demand variety, flavor and, increasingly, seasonality.

“They like when they’re able to get the season’s best produce and ingredients,” Dritsas said. “They look for the opportunity to accent their [traditional] steakhouse experience with some local seasonal ingredients.”

Those offerings include heirloom tomato salads, sometimes with burrata and pesto, other times with walnut vinaigrette and Danish blue cheese crumbles, or with avocado and corn straight off the cob. “We give liberty to the chefs [at the individual restaurants] to come up with salads in season,” he said.

Dritsas also uses on-trend ingredients, including a salad of kale and shaved Brussels sprouts that has been a staple for the past three years, and over the past six months he has added a kale and quinoa salad.

For both salads he uses tender baby kale.

“They look like little baby spinach or arugula leaves, but they have the roughage and nutritional value of full-blown kale,” he said.

Dritsas tosses them with red and white quinoa that he makes by simmering the grain in a court-bouillon just until it starts to pop out of its shell — about six to eight minutes — along with corn, diced jicama, dried cranberry and manchego cheese and a choice of dressing.

Buffalo Wings & Rings, a 44-unit sports bar focusing on wings, burgers and fried bar food such as onion rings, is also stepping up its game, according to research & development chef Elliot Jablonsky, who has found that his mostly male sports-watching customers also like salads from time to time. They won’t go for the salads when they’re at the bar with the guys watching the game, “But if they’re with their families, they wouldn’t hesitate to order the salad,” he said.

“It’s another reason to go to the same place,” he added.

That’s why Jablonsky is adding a salad this fall that he expects to appeal to a wider demographic, including women. It will be an arugula salad with goat cheese, candied pecans, dried figs and chicken breast, topped with lemon olive oil vinaigrette.

“It is fancy, but it’s still chunks of chicken, nuts and cheese, salad dressing and lettuce,” he said, noting that the Cincinnati-based chain already has a chicken Caesar, Cobb and traditional garden salad on the menu.

“As long as you have the basics there you’re not going to hurt anything by offering a few broader strokes in any category. … and there are certain [new] customers that will visit you if you offer certain things,” such as arugula and goat cheese.
Although arugula and goat cheese have been on menus at independent restaurants for years, the ingredients are still growing in usage on menus, according to menu research firm Datassential. “Goat cheese” appears on 12 percent more menus now than a year ago, and the French word for goat cheese, “chèvre,” is on 34 percent more menus, making it the fastest growing cheese on salads in the country, followed by the tangy crumbly Mexican cheese Cotija, and the Italian sheep milk cheese Pecorino.

Wendy’s has been touting its salad in national marketing campaigns, noting that you don’t have to serve a salad in a bowl to use great, fresh ingredients. Or, for that matter, seasonal ingredients. Dublin, Ohio-based Wendy’s is offering a Strawberry Fields Chicken Salad for the summer, which features sliced seasonal strawberries along with honey-roasted sunflower seeds, blue cheese crumbles, applewood smoked bacon and grilled chicken breast. The chain, which has 5,750 domestic units, serves this salad warm.

Cabbage isn’t on Datassential’s list of fast-growing ingredients, but Ric Scicchitano, executive vice president of food and supply chain at 184-unit Corner Bakery Café, based in Dallas, said it should be.

“It’s a great addition to salads,” he said. “It gives you crunch, sweetness, color, body and fiber.”

Cabbage might be less sexy at the moment than other cruciferous vegetables like kale and Brussels sprouts, but it has all the same qualities. Like kale, it’s tougher than lettuce greens, so he suggests shaving it finely. For kale, he softens it and removes some of the bitterness by pouring warm salad dressing over it. He also uses just one part kale to two parts lettuce.

“The whole blending of greens and grains is becoming a lot more popular,” he said. Scicchitano developed a four-grain tabbouleh, a Middle Eastern parsley salad traditional made with bulgur wheat. His version has two kinds of wheat — wheat berries and farro — along with quinoa and red rice.

“They’re whole grains — the kind of carbs that are good for you,” he said.

For chains with a salad focus, the pressure to improve their offerings is even more intense.

Jason Rotter, a partner in 23-unit Just Salad, a chain based in New York City, said using local products is a big part of their “salad promise.”

“We work with a company in New York and Chicago that provides us with all of our basil,” he said. “They’re hyper local, like Chicago basil in Chicago and New York City basil in New York.”

The herb is used for their lemon basil vinaigrette. Kale, lettuce and even many of their baked goods and cheese come from within a 350-mile radius, he said.

Sizzler, long known for the salad bar at its 127 restaurants, is experimenting with a new approach.

“Traditionally you got a plate and go around the salad bar and put on whatever you want and you went back to your table and ate your mountain of salad,” Tamra Scroggins, director of food culture at Sizzler USA said.

Now they’re experimenting with a salad mixing station, with a salad bartender who adds premium ingredients such as sun-dried tomatoes, feta cheese, artichoke hearts and premium diced proteins such as steak or baby shrimp, as well as salad dressings that aren’t at the regular salad bar, such as rosemary lemon vinaigrette, Thai chile vinaigrette and poppy seed vinaigrette. Those items are included in the price of the salad, which the bartender tosses and then places on a chilled, clean plate.

The station is only at two locations, but Kristina van Bruggen, the Culver City, Calif.-based chain’s vice president of marketing, said that the results so far are good.

“People are all about making something customized,” she said. “If they’ve made it themselves, they’re invested in it, and it’s the best dang salad they’ve ever had,” she said.

The nice presentation, which makes the salad look more substantial, seems to help, too, she said, as does the fact that the salad is tossed better.

“When you get a salad and make it at a traditional salad bar, when you bite it, you’re not getting it fully coated with salad dressing. By us mixing the salad for you, the flavors of that dressing are mixed throughout, so it’s a much better eating experience,” Scroggins said.

As a result, according to van Bruggen, the customers eat all the salad rather than not finishing it but going back for more food. As a result food costs at those locations have gone down, she said.

Satisfaction seems to have gone up, too, she said, with 80 percent of the customers who try the salad mixing station returning to it on their next visit.

At many smaller chains and independent restaurants, it’s all about the seasonality, especially in the summer.

At Angeline in New Orleans, chef-owner Alex Harrell does a quick pickle of fresh blueberries that he serves with shaved red onion and arugula tossed in buttermilk dressing and topped with crispy fried chicken livers.

He simmers two parts distilled vinegar, one part water, one part sugar and a couple of bay leaves, pours that over the berries and lets them sit overnight.

“It’s a really distinctive flavor,” he said. “The berries have such a natural sweetness this time of year. Then you add the vinegar and a little bit of savory quality from the bay leaf. They’re nice and plump, and it’s a really nice counterpoint to the crispy livers.”

Tyler Herald, chef of Napolese, a three-unit pizzeria in Indianapolis, is focused on carrots for his salad this summer.

He gets a variety of light orange, dark orange, yellow and crimson carrots, which he roasts whole.

“I ask my cooks to try and not think about how they cut them,” Herald said, because he wants them to be roughly and unevenly chopped. He plates them with roasted green beans, roasted corn, basil, shaved Parmesan cheese and peaches that are sliced to order. Herald tosses the salad in olive oil and finishes it with a balsamic reduction.

“It’s probably what I’m most excited about on the menu right now,” he said.

Justin White, chef of Franca in Atlanta, is making a salt-baked beet salad for the summer.

He coats purple and golden beets in sea salt, cardamom and a little lemon and roasts them at 350° in the oven for around 40-45 minutes. Then he cools the beets in a metal bowl wrapped in plastic wrap so their skin loosens, and then peels them and either slices them or cuts them into wedges. He serves the beets with watercress, smoked fromage blanc and pistachio butter.

White makes the butter by grinding pistachios and mixing with softened butter. “It turns into this really nice, green soft butter,” he said.

He dresses the salad in a dressing of lemon, water and oil and garnishes it with roasted lemons.

At Meauxbar in New Orleans, chef Kristen Essig is using Louisiana crab claw meat from a single family supplier in Lafitte, La., and peaches from Louisiana and Alabama for a salad that she’s bringing back this summer for the third year.

Also, in the salad is a quinoa pilaf, made by simmering the grain in water for about 15 minutes, letting it sit for another 10 and fluffing it with a fork before Essig spreads in a sheet pan and lets it cool to room temperature.

“It was a complete accident when I made this salad,” she said. "I’d ordered way too many peaches, and one thing you do when you need to move something is put crabmeat on it. … But it’s really a fantastic flavor. The acidity, bitterness and sourness really work well together.”

She garnishes it with pumpkin seeds.