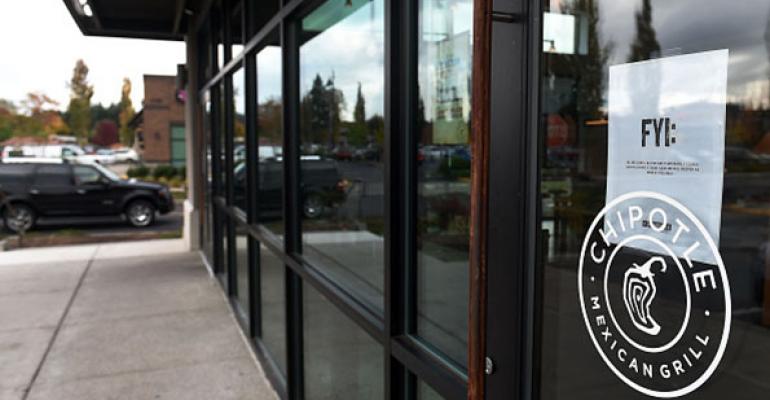 <p>Chipotle shuttered dozens of restaurants after an E. coli outbreak that began in October.</p>
News>Fast Casual

Dozens and perhaps hundreds of restaurant chains around the country have staked their futures on a model that Chipotle Mexican Grill is known for: fresh produce, local or organic ingredients where possible, in a fast-casual setting.

But Chipotle’s recent E. coli outbreak has put the use of freshly prepared ingredients and local sources under the spotlight. And food safety experts stress that growing chains hoping to build a business based on a similar model should spend what it takes early in their history to ensure proper supply chain oversight.

It’s uncertain exactly what caused Chipotle’s E. coli outbreak. And it’s important to note that the coast-to-coast scope of the outbreak suggests that a systemwide issue or national supply is the cause, rather than a local supplier.

In addition, while Chipotle is associated with local ingredients, it really only sources a fraction of its produce locally. Only 10 percent is sourced from local farms, Chipotle chief financial officer John Hartung said during a recent call with analysts.

Experts warned that the use of local sources can make supply chain oversight more complex. It increases the number of suppliers that have to be overseen. And some smaller suppliers might not have the food safety mechanisms or inspections that larger suppliers have.

“When you go local, oftentimes these are very small farmers,” Cegnar said. “They may not have the treatment facilities on the water. Livestock may be getting into watering systems. They may not have the staff to do inspections. Plus you have a lot more points of supply. Instead of just three national suppliers, you have multiple local suppliers. So your risk probability goes up.”

Food safety is a serious concern for consumers. Chipotle’s stock price has fallen by 26 percent since the E. coli outbreak was first revealed in October, wiping out $6 billion in market value for the chain. That’s a steep cost, and it doesn’t even factor in lost sales. Same-store sales are expected to decline 8 percent to 11 percent in the fourth quarter, the company has said.

Slightly more than half of all foodborne illness outbreaks from a single location came from a restaurant last year, according to the Centers for Disease Control and Prevention. There were 517 outbreaks at restaurants in 2014, resulting in 5,640 illnesses.

Multi-state outbreaks at a single restaurant chain are relatively rare. The Chipotle outbreak is the first such incident at a chain since 2012, when tainted sprouts sickened customers at Jimmy John’s locations.

Companies hoping to prevent these types of incidents need to ensure they have staff on site to oversee the supply chain and make sure suppliers are following food safety protocols.

This is true for any chain. But it’s especially true for emerging chains building their businesses with a menu loaded with freshly prepared ingredients from local sources.

“If you’re buying a lot of local products — or any products — you’ve better had good systems in place to pick up these problems,” Cegnar said. “If you make those decisions to go with a lot of products that are high risk, better have staff on board to deal with it and set up systems. You can’t afford not to do it.”

Restaurant chains hoping to use local sources for their supplies need to invest in strong supply chain departments. And they need to perform the oversight from those departments, rather than source them out to the general managers in the location.

“Where the gap on locally grown stuff is when the corporate supply chain group doesn’t know who a local source might be,” said Bob Sala, an industry consultant and former founder and CEO at distribution marketing company Distribution Market Advantage. “They may have the specification, but that doesn’t mean the supplier itself has the food safety or security processes in place.”

Jim Mizes, president and chief operating officer of Pasadena, Calif.-based Blaze Pizza, said his company shifted from the use of local produce suppliers to a national supplier. The move was made about two months ago, shortly before the recent E. coli outbreak at Chipotle, Mizes said. But Chipotle’s foodborne illness troubles has “heightened the urgency” in making such a move, he said.

Blaze Pizza, a rapidly growing, mostly franchised brand, this week passed the 100-unit mark and is gunning for 200 locations before the end of 2016. At around the 70-unit mark, Blaze executives began getting concerned about the use of local produce suppliers, which were largely selected by the chain’s franchisees, many of whom already had supplier partners in place as operators of other brands.

Use of those local produce suppliers created challenges in terms of consistency of product, for example, and Mizes was increasingly concerned about the ability to manage food safety, such as ensuring that suppliers had proper certification and safe food-handling practices.

“We were moving from being an infant brand to a young adult concept, and we had to start behaving and following the processes of large brands,” he said. “We got to our 70th restaurant and said this will get out of hand if we don’t get our arms around it now.”

Mizes, however, said the Chipotle incident will likely have a silver lining for the industry as a whole.

“Ultimately, there will be a better supply chain,” he said. “We’ll all have heightened sensitivity and suppliers will have to have better traceability and standards across the board in terms of product.”

And some operators caution that the concern over locally sourced products goes beyond food safety and into the customer promise. It can often be difficult to source local products.

“Be careful what you promise [to customers],” John Allegretto, chief supply chain officer for BJ’s Restaurant and Brewhouse, said at the Restaurant Finance and Development Conference last month. “If you start making promises, and don’t know what it means, you could get yourself into trouble.”

Emerging chains building their brands with specific products or promises can hurt their relationship with customers when they can’t meet those promises. “Not being able to get a key item that’s been promoted can really harm a brand in its early stages,” Sala said.

Sala said that finding locally grown produce is particularly challenging. He said it’s risky for chains to allow local unit managers, for instance, to find local produce because they may not necessarily follow the same supply chain control systems that supply chain departments do.

Supply chain departments visit suppliers, have good controls and approve distributors. “Where the gap is on locally sourced stuff is when the corporate supply chain group doesn’t know who a local source might be,” Sala said. “They may have a specification, but that doesn’t mean the supplier itself has the food safety and security processes in place.”

One solution for emerging brands is to grow slowly.

Sala said that chains that grow deliberately and build out specific markets could more easily meet their brand promises. Chains that disperse their units more can have problems finding supplies in markets where they don’t have many restaurants.

“If you have some unique product that helps differentiate the chain, like a salad dressing sauce, that’s hard to support in a low density market,” Sala said. “Low density markets are challenging and can really hurt the brand.”

Mendocino Farms, the 11-unit "better sandwich" chain, has been deliberate about its growth for that reason. Co-founder Mario Del Pero also contacted executives at Whole Foods Market early in his chain’s history to learn about sourcing local, sustainable products. Whole Foods went on to invest in Mendocino.

“It’s a big question of whether you can scale sustainability and hyper-regional,” Del Pero said at the conference. “That’s why we started slow, organically and methodically, to make sure we live our values, and how we scale our culture.”