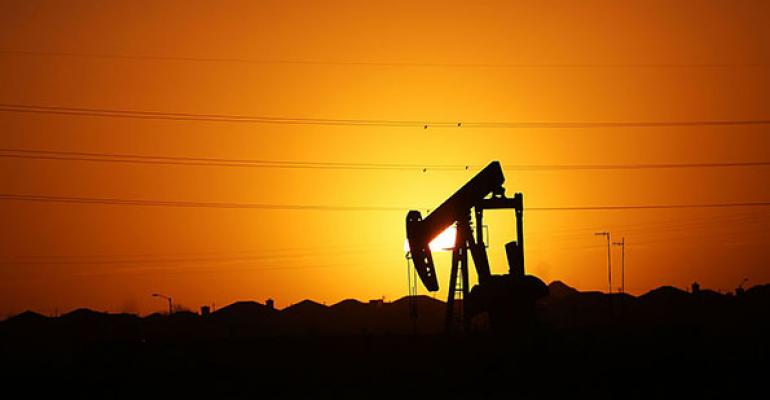 Declining oil prices are muffling restaurant sales gains in some Texas markets, but equity analysts are cautiously optimistic on economic trends in the Lone Star State.

The National Restaurant Association 2016 Forecast, released in February, projected a 3.8-percent increase in sales in Texas, reaching $52.4 billion this year, rising from $50.4 billion in 2015. Texas ranked second in total restaurant sales behind California, which is expected to reach $79.1 billion in 2016. The NRA forecast the total national rate of increase in restaurant industry sales would be 5 percent in 2016.

But restaurant companies were still looking at developments in the state. Greenwood Village, Colo.-based Red Robin Gourmet Burgers Inc. said Monday that it was planning to expand in Texas with the acquisition of 13 franchised restaurants there.

Stephen Anderson, an equities analyst at the Maxim Group, wrote in a note Tuesday: “We think the franchised units in Texas, now under corporate ownership, will serve as the springboard for expansion plans across the Lone Star State, where there currently are only 20 locations.”

“Although the overall Texas market currently is under pressure from slumping energy markets,” Anderson said, “we contend there is solid long-term potential in a market RRGB has long targeted for unit growth.”

David Tarantino and the analyst team at Baird Equity Research said in a note Monday: “We are cautiously optimistic that restaurant industry trends can continue to hold up well in Texas in upcoming periods.”

Baird found 14 public restaurant companies that had commented on Texas trends and that their remarks were generally “reassuring, with most noting comps in Texas have held up well overall,” being near or slightly below trends in other states.

“Several companies have cited some softness in oil-related markets, including West Texas (small fraction of footprint for most) and to a lesser extent, Houston,” the Baird note said, “but the strength in other parts of Texas (e.g., Dallas, where the economy looks robust) appears to be mostly offsetting any weakness in oil-related markets, leading to satisfactory trends within the state overall.”

Tarantino noted that the Texas unemployment rate has held fairly steady over the past six months, ranging between 4.4 percent and 4.6 percent, and remained below the national average of 4.9 percent in February.

“Job growth was positive in 2015 despite oil industry job losses,” his note said, “implying strength outside of the oil industry.”

What restaurant operators are saying

Here is a condensed look at the 14 restaurant brands and public comments that Baird examined:

BJ’s Restaurants Inc. (Feb. 18): "Texas has been more challenging compared to our other markets. And our perspective — my perspective — continues to be it's less about what's happened in the world of energy and more around the growth, and just the level of development in seats added in the Texas markets specifically.”

Brinker International Inc. (Jan. 20): “From a regional perspective, performance in oil markets was a headwind in the quarter. We looked at restaurants and markets with meaningful exposure to the energy industry, which are located in Texas, Louisiana and Oklahoma. They comprise about 17 percent of our system, and their comp sales were down 6.6 percent for the quarter.”

Buffalo Wild Wings Inc. (Feb. 3): “With respect to Texas, actually, we've been pretty pleased with what we've seen there. We had good same-store sales in Dallas and Houston. In Q4, they were at least slightly above the average for company, and that was even with the Dallas Cowboys not performing all that well.”

Cheesecake Factory Inc. (Feb. 16): “Texas continues to be a good market for us. It's maybe off a little bit from where it was, but it's still
an excellent market for us.”

Chuy’s Holdings Inc. (March 1): “We’ve seen a little softening in Houston and San Antonio, but again, both markets are still up.”

Del Frisco’s Restaurant Group Inc. (March 1): “Houston is clearly the most challenging. We haven't really seen any significant impact that we would attribute to oil and gas in Austin. DFW and Fort Worth, we've definitely had some impact, not as significant as Houston.”

Denny’s Corp. (Feb. 17): “The small markets in Texas in particular had some material declines in traffic. So, overall, Texas was still a positive state for us. We have quite a number of restaurants there. But it was about 250 basis points behind the brand average. So still positive, but softer as a result of the economy there.”

Ignite Restaurant Group Inc. (March 3): “In terms of comps for Brick House, our biggest challenge there is that 10 out of 24 locations are in Texas in the oil patch. That's where we seem to be fighting our biggest battle. We're going to have to fight through that and we're going to have to find some creative ways to get customers through
the door.”

Jack in the Box Inc. (March 15): “We have seen markets like Arizona, Texas and California at times have big disparities where we would tell the marketplace, ‘Hey, we're seeing something happen.’ We don't see that today.”

Sonic Corp. (Oct. 19): “The only place where you could say that some sales are somewhat sluggish, and they're still positive, is in some select stores in the select markets in West Texas. Those still have positive sales trends. But [for] Texas and Oklahoma generally, we're not seeing any material shift in business.”

Texas Roadhouse Inc. (Feb. 22): “…There's some areas within Texas to keep focus on, the West Texas area where we have a couple of restaurants. You may see some variability there, but overall Texas continues to be strong. We haven't really seen anything that says otherwise.”

Wingstop Inc. (March 3): “We've talked about this many times over the past few months, six months anyway, that our Texas market has been performing consistent with the pace of the brand overall; and one highlight we typically mention is the performance of our company stores, of which the majority of those are in the Texas market itself.”