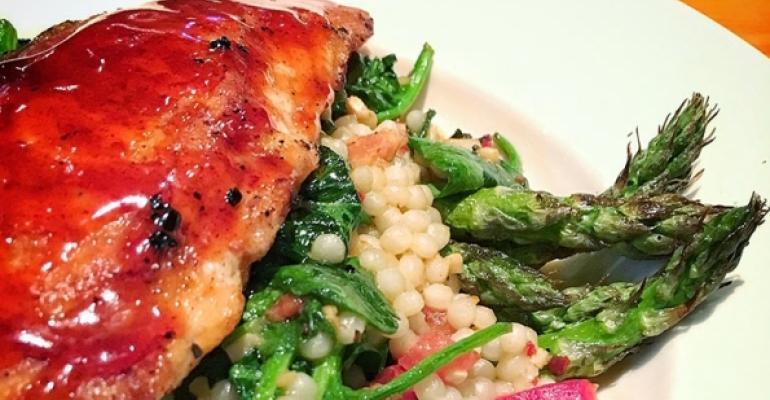 The Huntington Beach, Calif.-based chain next week will roll out a new menu that includes a lunch lineup of Italian wraps/piadinas and grilled cheese sandwiches, said Greg A. Trojan, BJ’s president and CEO, in an earnings call with analysts.

“We believe we can attract more value-oriented guests at lunch by offering some new flavors and lunch combinations,” Trojan said, adding that they would be “at a very compelling price point” to drive incremental transaction increases.

BJ’s grew average check by more than 3 percent in 2015, Trojan said, and this year’s plan is to balance that check growth with traffic increases, with lunch being a focus.

“We do think there's an opportunity of value at lunch,” he said. “I still think people will order the large burger offerings that we have out there, but I think we can attract some of those more value, bargain-hunter folks with some lunch offerings at the same time.”

Trojan said casual-dining concepts have seen increased competition from fast-casual brands, and much of that has been because of price.

“People tend to be more value-focused at that daypart,” he said, adding that the brand’s menu engineering hadn’t been “focused on the value side as much.”

Trojan said burgers led the way in increasing check growth at lunch, the daypart where the company saw “a slightly more disproportionate part of our guest check growth.” Staff members had been highlighting the lunch specials and lunch combos, but the new menu will include a number of value-oriented lunch items, he said.

Trojan said that later in the year BJ’s will offer some check-building menu initiatives in both the brand’s EnLightened (under 795 calories) and center-of-the-plate entrée menu categories.

He said the EnLightened menu sales have continued to grow since last year reporting that 25 percent of checks included an item from that category.

“Our mix of EnLightened sales continues to grow year-over-year, even during more indulgent times of the year like Q4,” he said. “We have been consistently delighted by our guest reception to high-quality, higher-priced items and believe we have the permission to continue to drive check through higher-quality center-of-the-plate items.”

BJ’s also plans to put some marketing behind it smartphone app, which was one of the first among casual-dining brands.

Gregory S. Levin, BJ’s chief financial officer, said the company has found consumer adoption to be slow and a struggle “just getting people to change their habit to use the app as frequently as we would expect” for placing orders, paying and putting names on wait lists.

Many casual-dining customers only visit once a month, Levin said, “and sometimes you forget about it in that time frame versus maybe some of the other concepts out there that have higher habitual use, so to speak, like a coffee place where you're going in there every single day.”

Levin said as other casual-dining concepts adopt payment apps “you get more adoption across all users.”

Trojan added that BJ’s will emphasize loyalty points, as “it gives you VIP kind of levels of treatment.” The company is also working to make sign up and first-time use easier.

“I continue to be very bullish about the future and the advantage of our concepts around it,” Trojan said. “It's not moving the business today, but there is no question in my mind it's going to.”

Additionally, Trojan said BJ’s new smaller, 7,400-square-foot prototype is performing well. “Its lower investment cost has been instrumental as we penetrate new markets outside of California and our Texas core,” he said.