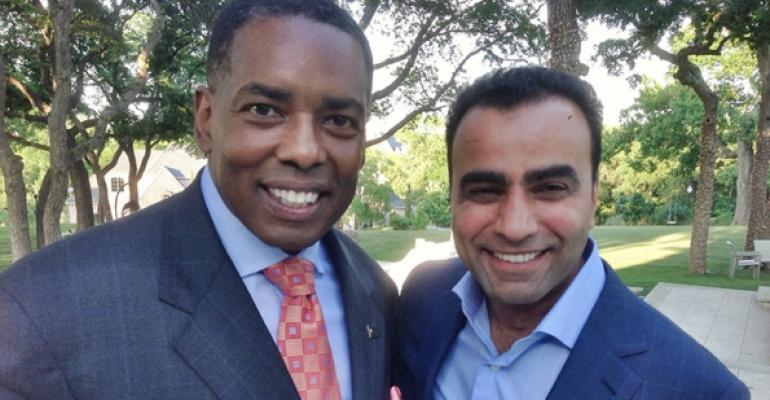 Dallas-based executive and Applebee&rsquo;s franchisee will see if work ethic can work magic at Roy&rsquo;s

Sunil Dharod has something of a golden touch when it comes to restaurants.

The Dallas-based, multi-concept franchisee, known by some as “The Ferrari Guy” for his love of the Italian sports car, has a track record of buying restaurants and lifting their sales almost immediately.

His first restaurant, a Jack in the Box unit, had $525,000 in sales the year before he bought it in the late 1980s. The following year, its sales were $825,000. It’s a pattern he repeated as a franchisee of Burger King and then of Applebee’s.

The 51-year-old native of India bought the chain in early 2015 from Bloomin’ Brands Inc., after two previous efforts to acquire it were rebuffed. Dharod will test his golden touch on the chain he frequented near his Dallas home.

“Are there a lot of challenges? Sure,” Dharod said. “But I’m very passionate. I love what I’m doing. I love the brand. We’ll resolve them in a positive way and implement things that are good for the long run.”

It’s fair to say that Dharod will not fail because of a lack of hard work.

Dharod was only 3 years old when his father died, leaving his mother to raise Dharod and his three brothers on her own. All the kids worked from a young age so the family could make ends meet.

At the age of 7, Dharod went to work, selling milk door to door. He rode a train,
picked up eight bottles of milk, and delivered them to houses every morning, repeating the process after school.

A single dropped bottle of milk would eat an entire month’s profits. “I would cry,” Dharod said. “What else would you do? You just feel bad about it. But you go a week or so and be careful.” For this work he was paid about 32 cents per month.

He did several other odd jobs. He sold clothing, such as saris worn by Indian women, or cloth for making shirts or pants. He separated rubber from old tires to be recycled. He also worked with his brother, Harshad, to scalp movie tickets. Sunil bought the tickets and Harshad sold them.

“If police catch you with the tickets, you get arrested,” Dharod said. “There were a lot of undercover cops. And if he gets caught, he didn’t have any tickets.”

For many of these jobs, Dharod’s mother worked alongside her children, delivering milk and selling clothes. “Everything we learned was from my mom,” Dharod said. “She instilled a good work ethic. She worked as hard as we all did.”

When Dharod was 15 years old, the family moved to the U.S., where his mother’s oldest brother had moved in the late 1960s. The family moved for the same reason so many other immigrants do: For the chance at a better life.

Once in the U.S., Dharod continued to display the work ethic he grew up with. When he was 16 years old and living in California, he took his first job at a Carl’s Jr. restaurant. He would later take a job at a Jack in the Box restaurant during the summers, and was also a busboy in a fine Indian restaurant at one point, working three jobs.

For a long time, Dharod wanted nothing more than to be a mechanic. He went to trade school, and after he finished he took a job at a Volvo dealership. He was 18 years old, and he was rich.

He made about $50,000 to $65,000 a year working as a mechanic, which was more than he had ever made in his life. But he also spent his free time buying cars, fixing them and selling them. He’d buy a car every week, and his wife Sharmila would help buy needed parts from local junkyards. At one point he had as many as 18 cars parked throughout his Los Angeles neighborhood. “My neighbors used to hate me,” he said.

The side work added nearly $40,000 to Dharod’s annual income. “As a kid coming from India who now makes $100,000, I was truly richer than Bill Gates,” Dharod said. He also saved most of it. “I didn’t drink or smoke. I didn’t do anything but work.”

He used that savings to buy his first restaurant, a Jack in the Box unit in Los Angeles, in 1988. The restaurant was underperforming, but he quickly grew its sales by $300,000 per year and added five more restaurants.

“It was simple,” Dharod said. “It’s basically running clean restaurants and providing good, hot food faster.” Hard work helped, too: He worked at the restaurants 18 hours a day. And often the family was in the restaurants with him, including his newborn son Chris.

Dharod sold those restaurants in 1993 and moved to Dallas, where he bought 12 underperforming Burger King locations.

The restaurants he bought averaged $750,000 in sales per unit per year the year before he bought them. During their best year after he bought them, the restaurants averaged $1.3 million. Dharod bought more Burger King locations, and also bought Blockbuster video stores in East Texas, as well as some real estate.

In 2008, just as the recession hit, Dharod bought 37 Applebee’s locations in Texas, Apple Texas. He bought another 21 locations three years later and built 12 more units, giving him 69 restaurants overall. He has since sold the Burger King locations.

During his years in Dallas, Dharod and his wife had grown fond of a restaurant in Plano, Texas, between their home and his work called Roy’s. “Me and her would literally eat there every week,” Dharod said.

A few years ago he called Bloomin’ Brands to see if it would sell him the chain. No thank you, they said. He asked again several months later and again got a quick no. But in the second quarter, Tampa, Fla.-based Bloomin’ Brands hired an investment bank to see what could be done with the 29-unit Roy’s.

Dharod jumped at the opportunity to buy the concept. His company, SSCP Management, bought Roy’s in January 2015. “We loved the food,” Dharod said. “The fish is flown in every day. And a lot of the sauces have a bit more spice. Being from India, that’s important.”

But Roy’s had been struggling, which enabled Dharod to buy the brand at a bargain-basement price of $10 million. The chain had $68.6 million in sales and reported a net loss of $13.6 million in 2014, the year before the concept was sold. The brand’s sales had fallen more than 9 percent over the previous two years. In short, it needed work.

Dharod admits that there are a lot of challenges in going from being a franchisee to running a brand. He says he will need a total of two to three years to get a good grasp on the brand “and then take it to the next level.”

He also believes that his start as a franchisee will help. “There’s a lot that franchising teaches you, and you’re able to implement not just in Roy’s, but in a lot of different ways in your life,” Dharod said.

Roy’s will also benefit simply from the attention that Dharod can provide it. “It’s a small chain,” he said. “It lacked some of the attention which somebody else could give. It’s a good, solid legacy brand that just needed some attention.”

These days, Dharod continues to work hard. “I still work seven days a week, 15 to 18 hours a day,” he said. And his children are following him in the business. Chris Dharod runs the Applebee’s locations, and daughter Puja will get into the business when she finishes school.

“I have a reason to keep growing,” Dharod said. “They want to do this, also. At some point I’ll become their personal assistant.”

His older brother Harshad also operates restaurants. He has more than 75 Carl’s Jr. units in Southern California, plus owns 2,000 apartments. He lives a couple of blocks away from basketball player Kobe Bryant.

Sunil Dharod no longer works on cars, but that hasn’t ended his interest in them: The former mechanic owns four Ferraris. “Most of the Indian community knows me as ‘The Ferrari Guy’ or ‘The Ferrari Uncle,’ Dharod said.

And for this, he thanks his upbringing.

“Everybody talks about the American dream,” Dharod said. “This is just more than that. Coming from my childhood, I loved my childhood. There was nothing I would change, as far as work goes.”

Correction: Jan. 8, 2016  An earlier version of this story misstated when Sunil Dharod acquired Roy's. It was in early 2015.