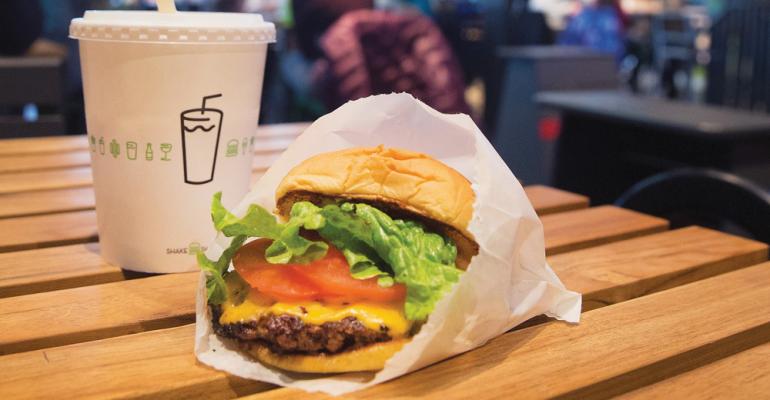 In recent weeks, the chain, previously one of the fastest growing brands in the U.S., has opened four new stores, including one in Sacramento, Calif.

“We’re starting to get back on the development schedule,” CEO Randy Garutti said during the Jefferies Virtual Consumer Conference held Wednesday.

Garutti did not offer guidance on store development, only stating that new growth would be far fewer than the initial 40 company stores planned for 2020.

Garutti, who spoke along with chief financial officer and president Tara Comonte, said restaurants continue to be challenged by the pandemic, especially those located in high foot traffic areas like New York City and Las Vegas.

The chief executive noted that Shake Shack restaurants are centered around coming together places that encourage gathering. As such, “our tail will be longer” when it comes to recovery than a traditional fast-food format. Restaurants with drive-thru lanes have outperformed other concepts during the pandemic.

As revealed in the company’s latest earnings call, Garutti said Shake Shack is adjusting its service model by developing Shack Track stores. These restaurants have been modifed to include drive up lanes designed for pickup of digital orders. Some will have walk-up windows as the brand pushes “convenience” at all Shacks.

The company said it will continue to outfit stores with kiosks, though it will monitor usage given that some people might not want to touch screens during a pandemic.

Throughout the health crisis, the chain has turned to a limited menu to ease operations for kitchen staff. That means fans are unable to order Chicago-style hot dogs and concretes at most restaurants; new restaurants are also not selling Chick’n Bites, the CEO said.

The company also halted limited-time offerings but continues to develop new items at its Innovation Kitchen. In fact, the brand is testing a veggie burger at two locations — one at its Innovatioin Kitchen restaurant in New York City, the other at a store in New Jersey.

“We’re excited at seeing where that goes,” Garutti said. “That’s a big category for us.”

As dining rooms reopen, he said each restaurant will look at bringing back some items, introducing new limited-time offers like Hot Chick’n Bites, and possibly expanding the veggie burger test.

Before the pandemic, the brand said it would debut more buzzworthy menu items to reverse declining guest traffic.

In its latest quarter, Shake Shack reported a 12.8% drop in same-store sales, driven primarily by a 29% plunge in growth in March.