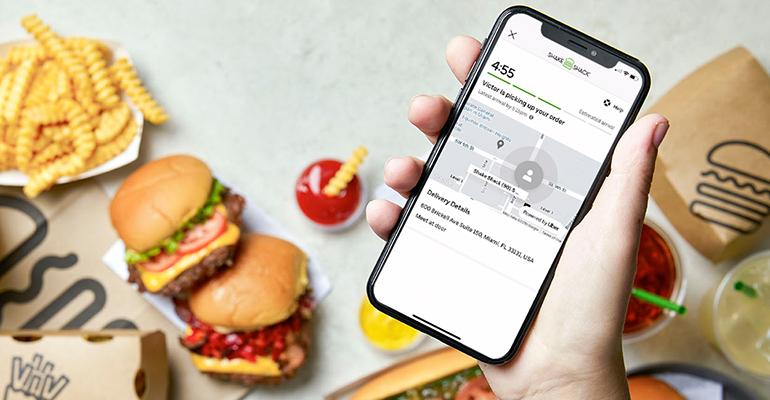 Shake Shack has teamed up with Uber Eats to launch delivery nationwide via its ordering app today.

The 310-unit fast-casual burger chain is charging a 99-cent flat fee for deliveries under $35. Larger orders are delivered for free.

The chain’s app users also will be able to track the order — an extension of what the New York City-based chain already offers for pickup.

In a release announcing the launch, Shake Shack said digital orders have been increasingly important to the chain since the pandemic started. App- and web-based sales in the fourth quarter of 2020 grew by 350% year-over-year and accounted for nearly 60% of total sales, it said.

Between March 2020 and Jan. 2021, the chain gained 2 million first-time purchasers via those channels, it added.

Although Shake Shack’s same-store sales have been improving since they bottomed out in March, there were still down by 17.4% for the quarter ended Dec. 30 compared to a year earlier, the company reported in January.

Shake Shack is promoting the launch with a free order of fries with every delivery order of more than $15 through March 31. It is also launching an ad campaign via Facebook, Instagram and Twitter.

“We’re thrilled to introduce delivery through our own app, offering guests a new way to get Shake Shack however and whenever they want it,” Shake Shack CEO Randy Garutti said. “With an influx of new and returning guests to our digital channels this past year, we’ve accelerated our digital investment. Delivery through the Shack app represents the latest innovation from Shake Shack and is reflective of our increasing focus on convenience across the broader Shake Shack experience.”

The chain is also in the process of redesigning its app and adding payment options including contactless payment, Apple Pay and Google Pay. It anticipates the redesign to be complete in the second half of 2021.