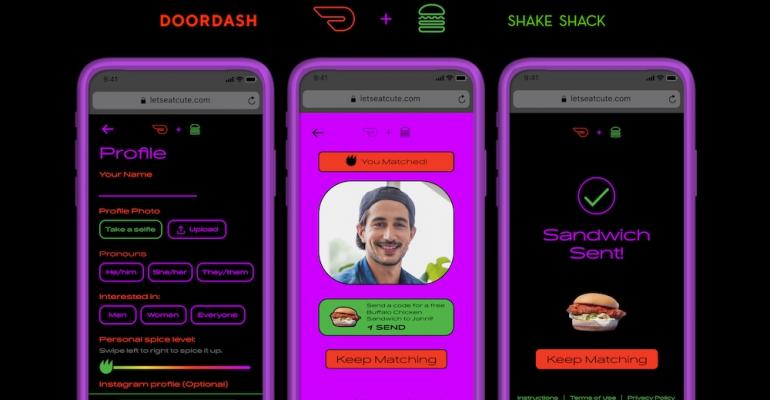 Users who find a match get the menu item for free

Shake Shack is teaming up with DoorDash to deliver romance as well as chicken sandwiches for the first two weeks of February.

Related: Steph So works to humanize the digital experience at Shake Shack

People can visit the site, LetsEatCute.com, upload a picture, and tell how spicy they like it — presumably the 240-unit chain’s new spicy sandwich. Once users match with someone, the person they match with can send a promotional code for a free Buffalo Chicken Sandwich, which the chain launched as a limited-time offer on Jan. 25 for users of its mobile app and for everyone else on Jan. 28. The sandwich, made with a seasoned fried chicken breast in Buffalo sauce topped with ranch dressing and served over pickles and shredded lettuce on a toasted potato bun, starting at $7.79, along with Buffalo-spiced cheese fries, are available through April 25.

To promo is limited to orders of $20 or more.

The temporary dating site will only be up until Feb. 15, however.

Shake Shack launched its first chicken sandwich, the Chick’n Shack, in early 2016 and it won the 2017 MenuMasters award for best new menu item of the year.

Fried chicken sandwiches have been popular menu items throughout the pandemic, with dozens of chains launching new ones, as they travel well and are regarded as a comfort food by many people.

This story has been corrected to reflect that the person a user matches with sends the promo code for a free sandwich and that a minimum order is required.
TAGS: Marketing Food Trends
0 comments
Hide comments
Related
Sponsored