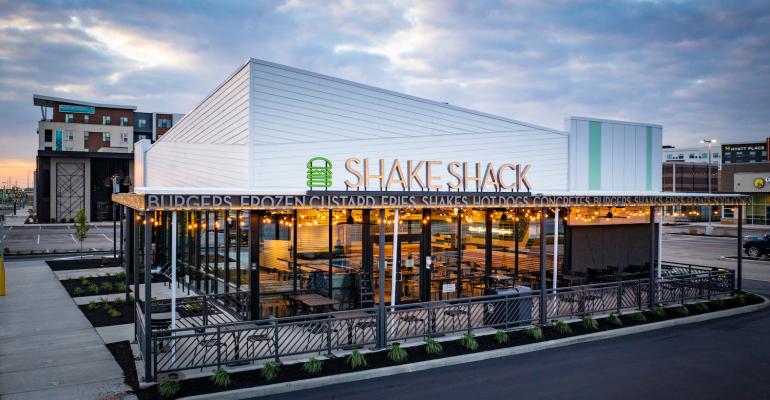 Shake Shack locations in suburbs, such as this one in Fishers, Ind., drove same-store sales growth n the fourth quarter of 2021.
News>Fast Casual

Shake Shack’s same-store sales surpassed pre-pandemic levels in the fourth quarter of 2021 as suburban sales gained momentum, according to a preliminary business update it released ahead of the annual ICR conference Tuesday.

In the third quarter they were down by 7.3%.

The turnaround comes despite the fact that the New York City-based fast-casual burger chain continues to see sales lag in its hometown, where it has nearly 30 of its more than 240 domestic locations — traditionally some of its highest-volume restaurants — and where sales remain down by more than 20%.

“The fact that we’re 9% comping over ’19 in the suburban Shacks and [are] overall positive for the company in Q4, considering the drag that our deep, high-volume urban Shacks continue to have on the company, I think it’s incredible. … and that points to what the world can look like post-COVID, someday,” CEO Randy Garutti told attendees of the ICR conference, which was held virtually due to the rapid spread of the omicron variant of the novel coronavirus.

That variant also affected sales in the last week of the 2021 fiscal year and early 2022 as some restaurants could not remain fully staffed.

“We expect these trends to continue to impact sales in our company-owned Shacks and our licensed businesses,” chief financial officer Katie Fogertey said in a press release announcing the preliminary results. “However as we move into the next chapter of the Shake Shack story, we remain committed to investing in what makes us so unique: our people, our digital transformation, format evolution and the guest experience.”

The fourth quarter saw the opening of the chain’s first two drive-thru locations — one in Maple Grove, Minn., and the other in Lee’s Summit, Mo.

“Early results for these two Shacks are encouraging and we look forward to continuing to expand our drive-thru footprint in the years to come,” Garutti said in the release.

Additionally, the chain has opened more non-traditional locations, including one with its first full bar at Denver International Airport, and a new ballpark location at Dodger Stadium in Los Angeles.

“Continuing to grow our stadium and event business has been a really exciting part of this year,” Garutti told ICR attendees.

Shake Shack also is opening new locations along the New York State Thruway as part of an agreement with convenience store chain Applegreen.

“We’ve been believers for a long time that whoever wrote the rule that when you pull over to get gas or stop on the highway that it needs to be a less-than perfect-experience — we’re going to add something to the dialog,” Garutti said at ICR.

However, he also told ICR attendees that the chain would not neglect its urban strongholds, and showed a rendering of a new Shake Shack location slated to open at the base of The High Line, a popular elevated park in Manhattan. 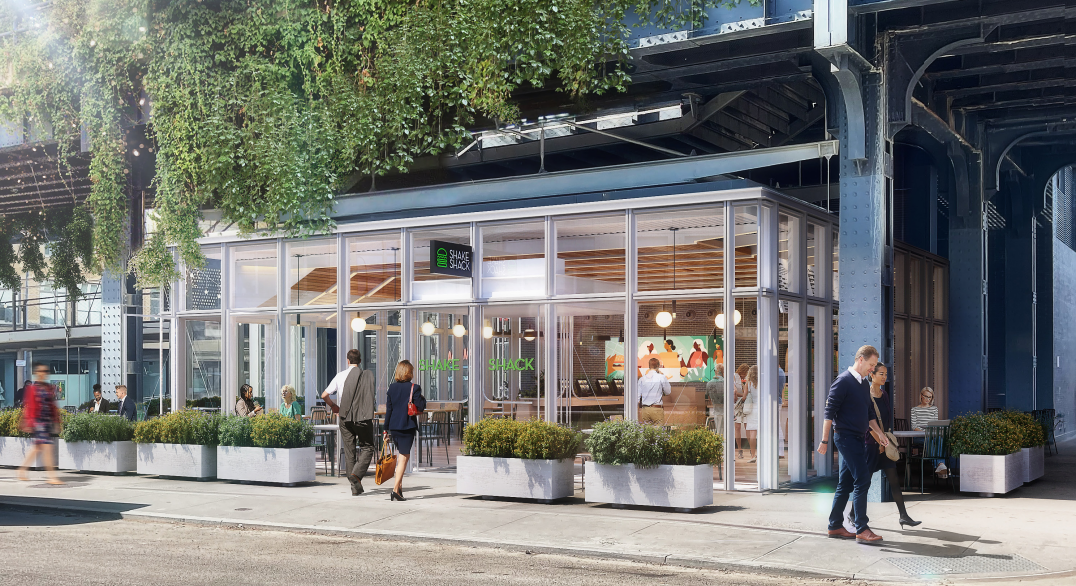 A rendering of a new Shake Shack location slated to open in Manhattan's Meatpacking district.

Digital sales have become an increasingly important part of Shake Shack’s business over the course of the pandemic, and now account for 42% of total sales. Fogertey told ICR attendees that 3.5 million purchasers have used the chain’s app since March of 2020.

Over the course of 2021, 36 new company-owned Shake Shacks opened, and the chain has plans to open 45-50 restaurants in 2022. Three licensed locations at airports remain closed due to the pandemic, Garutti told ICR attendees.

According to the preliminary, unaudited results released Tuesday, Shake Shack saw revenue for the fourth quarter of 2021 increase by 29% to $203.3 million, compared to the same period in 2020. For the year revenue were up by 41.5% to $739.9 million, including a 53rd week in the fiscal year.