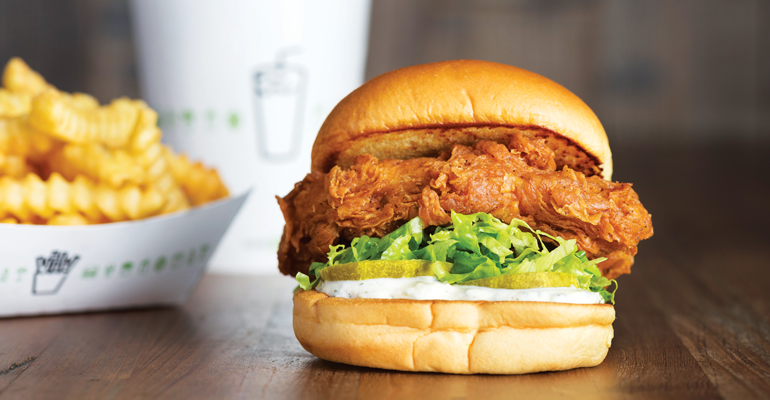 Elevating a classic with thoughtful execution

But leaders of the New York City-based fast-casual chain, which has 120 units, weren’t even sure if it would have a permanent place on the menu.

Culinary director Mark Rosati said that gave him time to perfect the sandwich.

“We had the luxury of time,” Rosati said. “There was no pressure, no deadlines.”

Rosati, like many Americans, is a fan of fried chicken.

“Off the clock, traveling in the South, I visited old fried chicken stands, and often they were just shacks,” he said. “They were all kinds of idiosyncratic in the ways they developed the chicken.” Rosati challenged himself to create a sandwich that would be as popular as the ShackBurger, which has fueled a rapidly growing international chain with a $1 billion market capitalization, without giving too much of a nod to classic fried chicken sandwiches.

After some experimentation, he came up with the idea of cooking the chicken breast sous-vide in a marinade of buttermilk, onion and garlic. He then considered grilling it, but found that when the chicken was battered and fried, the flavors of the marinade intensified. “What was unexpected was how much more flavorful the buttermilk and other seasonings became after being fried,” Rosati said.

Then it came down to deciding what else to put on the sandwich.

“Nothing was off the table,” Rosati said.

Shake Shack has a longstanding relationship with Martin’s Famous Pastry Shoppe, which supplies potato rolls for the ShackBurger. They tried other breads, but deciding to stick with the potato rolls.

They also experimented with toppings. The ShackBurger comes with two pickles chips on request, but the Chick’n Shack has more.

To enhance the buttermilk flavor, Shake Shack developed a buttermilk-herb mayonnaise with parsley, thyme and chives.

“It’s selling incredibly, incredibly well,” Rosati said. “To even come close to the ShackBurger in sales, we would have been thrilled, but to see it go neck-and-neck at times is a huge honor.”