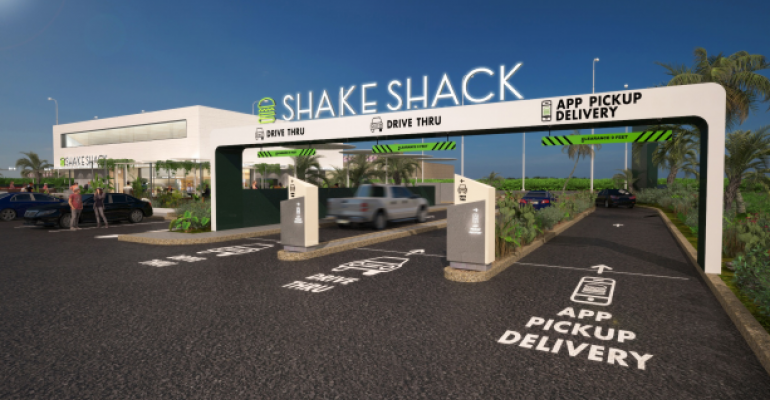 Shake Shack on Thursday announced plans to add the company’s first ever restaurant with a drive-thru as part of a strategy to diversify the format of its stores, which have been clobbered by the coronavirus pandemic.

The company said it is specifically looking “to test drive-thru locations in suburban high-traffic” markets. It did not name the location of the new restaurant.

The New York City-based chain announced other tests in the U.S. and abroad: In the United Kingdom, the company is working with a cloud kitchen to test selling its food by delivery only. Curbside pickup through the brand’s app is now available at 10 stores, and will roll out to at least 50 restaurants by the end of the third quarter.

It's really early, but we're encouraged by the initial results and convenience," CEO Randy Garutti said of the curbside test.

He told investors not to take too much stock in the cloud kitchen experiment.

"It's not something we’re focused on," he said.

The company turned to ghost kitchens in London because United Kingdom restaurants were "completely shut down," Garutti said.

Shake Shack also plans to step up menu innovation with plans to bring back buzzworthy foods like Hot Chick’n Bites and spicy fries in the fall.

The new revenue strategies and format changes come as the company adapts to a major change in consumer behavior due to the COVID-19 crisis.

Garutti noted that the company’s highest volume store in the theater district of New York City is now the brand’s worst performer as Broadway shows have been shutdown.

"To think that could have ever happened. It's crazy, right?," said Garutti, adding that some of the company's best performing restaurants remain closed due to government restrictions.

As previously announced, the brand is adapting to the contactless age of ordering by modifying restaurants to include drive-up lanes and walk-up windows to accommodate mobile orders. On Thursday, Garutti said roughly eight of these so-called Shack Tracks are in the works at existing restaurants.

According to a survey released July 30 by AlixPartners, 44% of consumers said drive-thru is the most preferred method for ordering restaurant food as the country started to reopen. Takeout/Carryout (40%) and curbside pickup (32%) were the next two popular methods for obtaining restaurant meals.

As for delivery, that method was the least popular; however, if consumers were going to order delivery, they preferred ordering directly from the restaurant over third-party delivery.

Throughout the pandemic, the brand’s digital channels have come to the rescue with sales from its app and website tripling in the quarter. That comes as the New York City-based chain experienced a 49% drop in same stores sales for the second quarter.

The company plans to upgrade its app in the next 6 to 12 months to include direct delivery and additional payment functionality. That follows a trend in the industry as chains look to reclaim their digital customers.

Net loss of $18 million compared to profit of $11.2 million for the same quarter last year.

The company closed the quarter with 292 restaurants. Garutti noted that a license store at LAX has permanetly closed as airport officials plan to tear down the terminal.