/sites/all/themes/penton_subtheme_nrn/images/logos/footer.png
Recent
Recent
NRN editors discuss KFC’s new wraps, McDonald’s earnings and marketing, and TikTok
Feb 03, 2023
January was a strong month for restaurant hiring
Feb 03, 2023
Why data is crucial for both guests and employees, Freddy’s COO says
Feb 03, 2023
What the future of equipment looks like
Feb 03, 2023
How USHG committed to its journey on diversity
Feb 02, 2023
Featured
The emergence of mocktails
Jan 23, 2023
36 restaurant industry predictions for 2023
Dec 21, 2022
10 restaurant chains making waves in the breakfast space
Dec 14, 2022
How eco-friendly Seattle restaurant chain Just Poke is doubling in size in 2022
Nov 17, 2022
News>Fast Casual

Restaurant chains move toward transparency with carbon labeling, other measures so consumers know what they’re eating 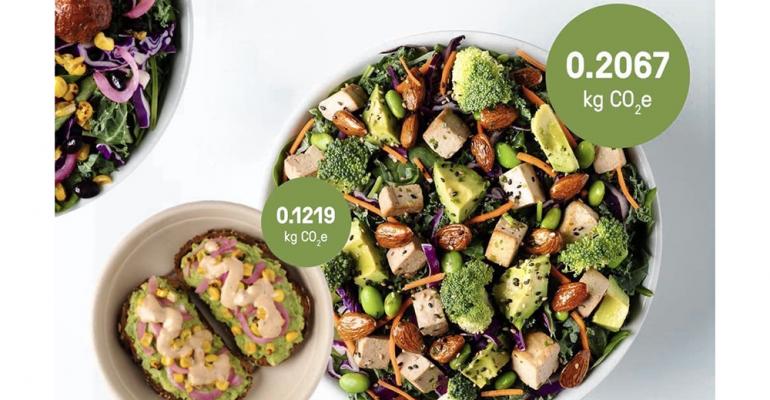 Start Slideshow ›
In a move to promote healthy eating and show customers how they are working to stop climate change, several brands have started labeling menus with carbon footprint information and using ingredients to reduce carbon emissions

Being eco-friendly is “cool” — ask anyone who switched to paper straws to save the turtles over the past few years. Paper or metal straws have become synonymous with hipsters across the country who feel they are doing their part to help climate change. The onus for “eco-friendly” actions are traditionally placed on consumers, while large corporations are the ones with the largest carbon footprints.

Some of the largest restaurant brands, such as Burger King and Starbucks, have decided to make larger-scale changes and take that weight off consumers’ shoulders by making it easier for them to choose eco-friendly foods.

Last week, Panera Bread announced it will use a new tool from World Resources Institute (WRI), the “Cool Food Meals” badge. This badge on a menu item denotes the item has a lower carbon footprint. The numbers fall in line with what WRI research finds is needed to meet the Paris Agreement on climate change by 2030. (The U.S. is no longer part of the Paris Agreement, but the goals are public.)

According to the WRI, “the per-meal threshold is based upon a maximum recommended daily carbon footprint for a person’s diet, which is 38% smaller than the current average.”

“We said to ourselves, ‘How do we take the issue of climate change and bring it down to what’s on your plate?’” said Sarah Burnett, vice president of food values, sustainability and public affairs at Panera on the addition of the “Cool Food Meals” badge on the online and app menus.

Starbucks recently released plans to be “resource positive,” saying it would put more resources into the environment than it takes out. Fresh water is cited as one of the most important resources the company is looking to replenish.

“This is an aspiration that we take on, recognizing it will come with challenges and will require transformational change,” Starbucks CEO Kevin Johnson wrote in a letter released in January. “Like most things that are worthwhile, this will not be easy. It will require all of us to play a role, and so we invite you to join us.”

And some brands are focusing on narratives around CO2 emissions through greenhouse gases. Burger King and Burgerville both recently released burgers that produce lower methane emissions through what’s fed to the livestock.

Livestock is responsible for about 14.5% of global greenhouse gas emissions, according to the United Nations’ Food and Agriculture Organization.

See what restaurants across the country are doing to show consumers transparency about what they’re eating beyond calories.